1841 England Census for Simons FamilySarah Short was born the 19 Mar 1818 in Ivinghoe, Buckinghamshire, England2 to parents Edward Short and Sarah Austin. Sarah was christened the 8 Nov 1818 at St. Mary's Church in Ivinghoe.3

Sarah was raised in Ivinghoe where she lost her mother at the age of 2, due to what appears to be complications following the birth of her younger sister Susannah, and her father at the age of 17. (Whether Sarah had to get by on her own as something like a housekeeper or if she was able to band together with her siblings is unknown. It should also be noted that Sarah possibly had 3 surviving half-siblings as well from her father's first marriage that may have been able to help.)

Not long after her father's death, Sarah met George and the couple was married on the 13 Mar 1837 in Ivinghoe at St. Mary's Church.4

The couple would welcome their first child, a son, Thomas Simons into the world on 10 May 1839 and a daughter, Maria Simons, would follow on 02 Jun 1841.

NY Arrival Manifest (1842)On the 1841 UK Census the family is noted as living in Ivinghoe, Buckinghamshire, England in the hamlet of Greatgap. The family consists of George, 20; Sarah, 20; Thomas, 2; and Maria, 3 months; The registration district is Leighton Buzzard.5

The family must have had some difficulty because within a year of the census they packed their bags and crossed the pond. The 1839 Robson's directory to Buckinghamshire seems to confirm this as George is not listed even though we know he lived here. This would make sense if he had trouble finding work.

Around the 15 May 1842 the Simons family departs London, England aboard the passenger ship Philadelphia. The Philadelphia docked in New York, New York on the 30 May 1842, where the arrival manifest noted the family as George, 25, farmer, from Great Britian, travelling with wife Sarah, 23, son Thomas, 2, and daughter Maria, 10 months.6

Nothing is known about the next 8 years, until the family turns up on the 1850 U.S. Census in North Royalton, Cuyahoga, Ohio (known as Royalton at the time). By this time George is listed as a laborer, 33, and Sarah, age 32.7 They have 2 additional children, a son Jesse was born in 1843 and another son John Edward Simons was born 6 May 1846.

1860 Census for Simons FamilyIn June of 1850, Sarah gives birth to their next child Charles Joseph Simons and follows up again on 07 Feb 1853 with their last child, a duaghter, Mary Ellen Simons.

In early 1860 the Simons family left North Royalton and migrated to the American heartland where they settled on a farm in Delhi Township, Linn, Iowa.

The family didn't have much time to settle as the Civil War broke out in 1861 and in August 1862 George and son Thomas joined the Union Army. They both were assigned to Company K of Iowa's 21st Infantry where they fought alongside each other.8

On the 9 Jan 1863, while seeing action during a skirmish in Hartsville, Missiouri, George suffered wounds to the head and knee of which was noted he would "take the rebel lead to his grave".1

1880 Census for Simons FamilyGeorge and Thomas would continue fighting until George was taken sick in Texas and transferred on 29 Feb 1864 to the invalid corps (reserves) in Baton Rouge, Louisiana where he contracted smallpox.

George was honorably discharged on 1 May 1865. Thomas stayed in the 21st and mustered out at the completion of his service on 15 Jul 1865.

George returned home to his family, which is where we find him on the 1870 census. Back on the family farm in Delhi living with wife Sarah, 52, and daughter Mary Ellen, 17.9

By 1880 George and Sarah were alone in their house but son Thomas and his wife had moved in next door. It's more than likely George sold Thomas a portion of his land to cut the workload as he got older, or to just groom Thomas to take over the family farm.10

Sarah in son Thomas Simons Bio (1914)On 20 Nov 1881 Sarah Short-Simons died of what was written as "Paralysis of the Heart". She was buried in Delhi Township in Evergreen Cemetery.2, 11

After Sarah's death, George moved in with his youngest daughter Mary Ellen and her husband Charles Robinson and their children. He was counted as living with them on the 1885 Iowa State Census where he was noted as being 67 years old.12

In 1887, George returned to England for reasons no longer known. It was here, in the town of Pitstone (which adjoins the town of Ivinghoe of his youth) where George died at the age of 70 on 1 Apr 1888.13

It is not known if George was buried in England or if he was returned to his family in Iowa for burial, but there is a headstone for him alongside is wife at the Evergreen Cemetery in Delhi Township stating his death occured in Pitstone, England. 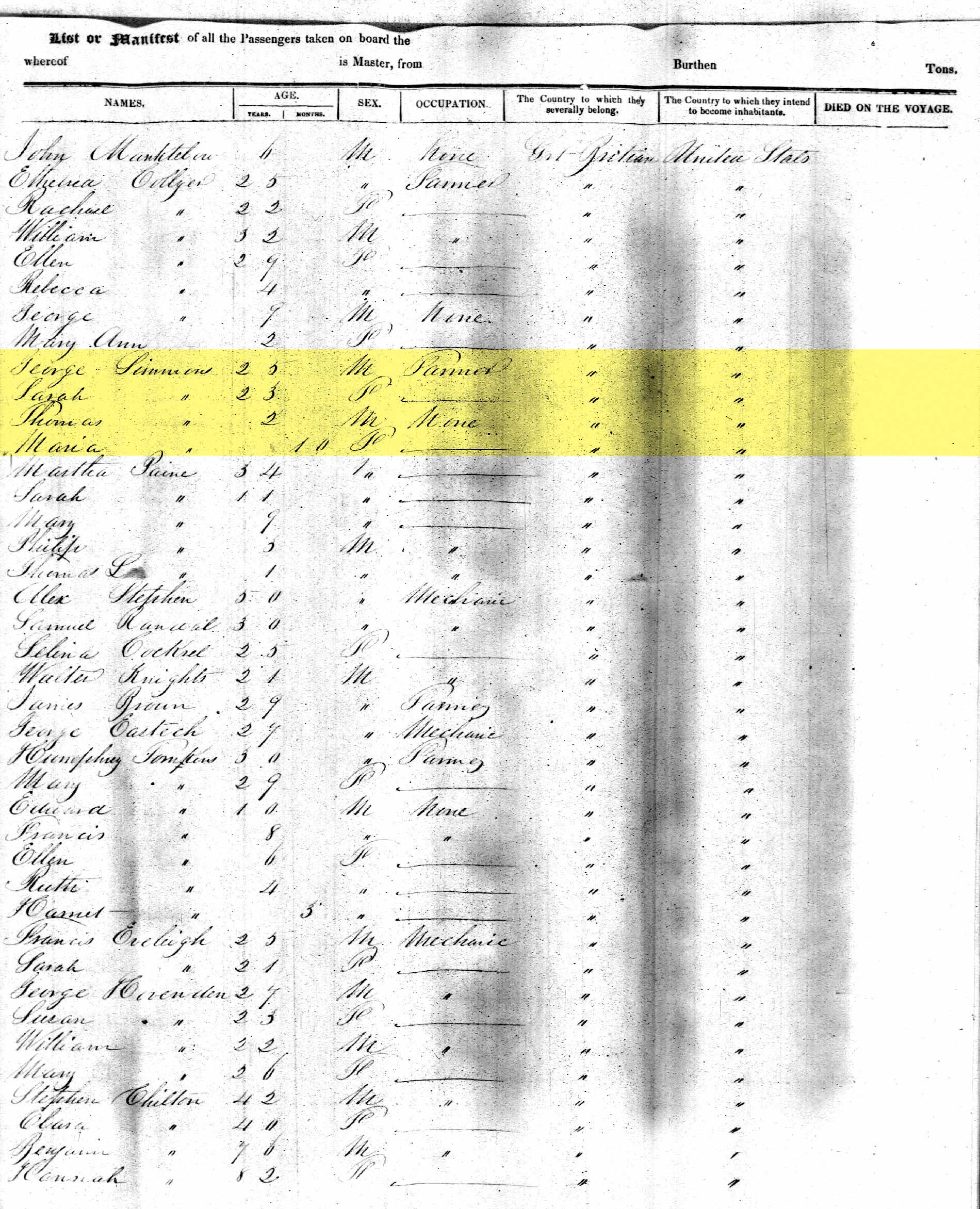 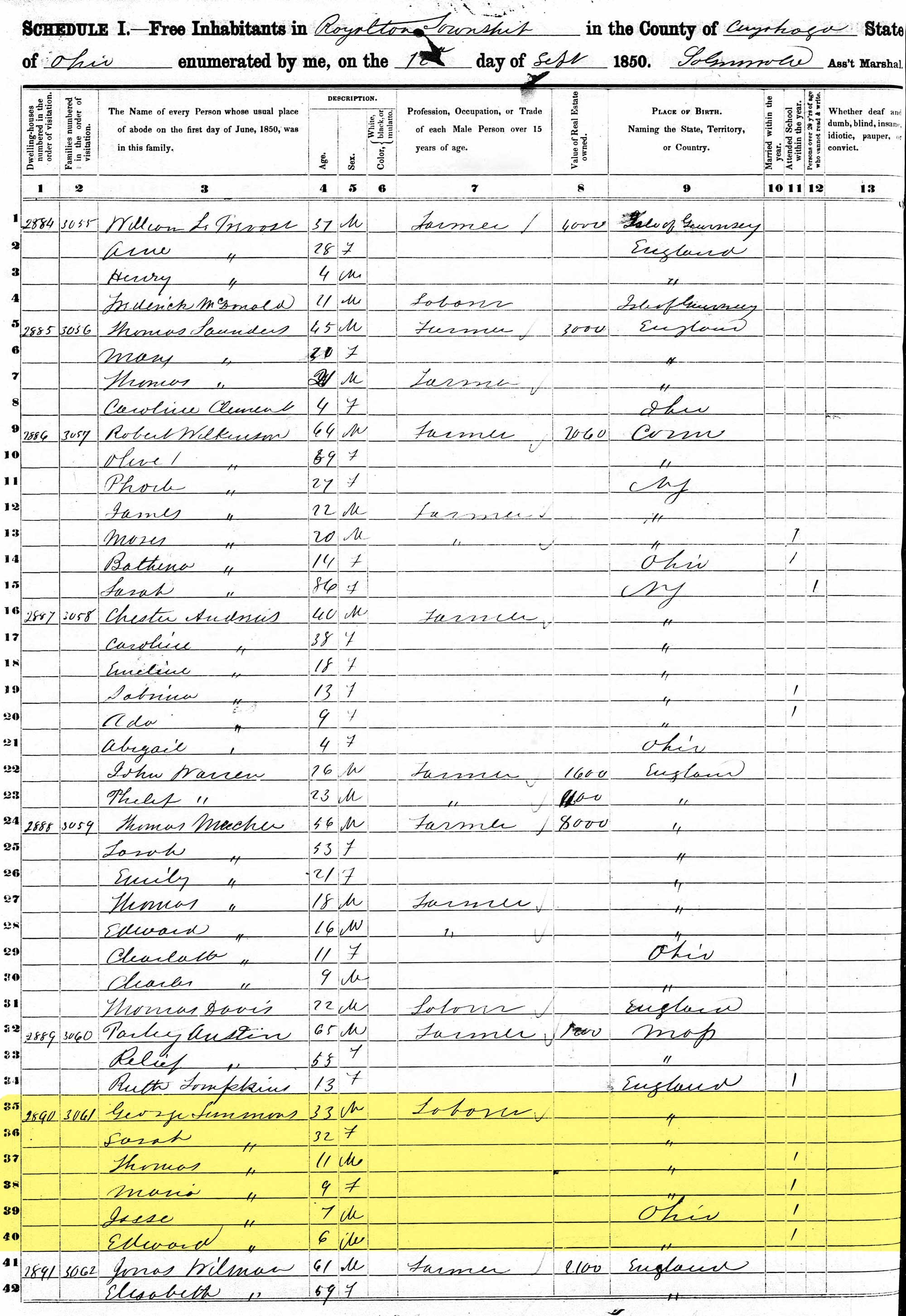 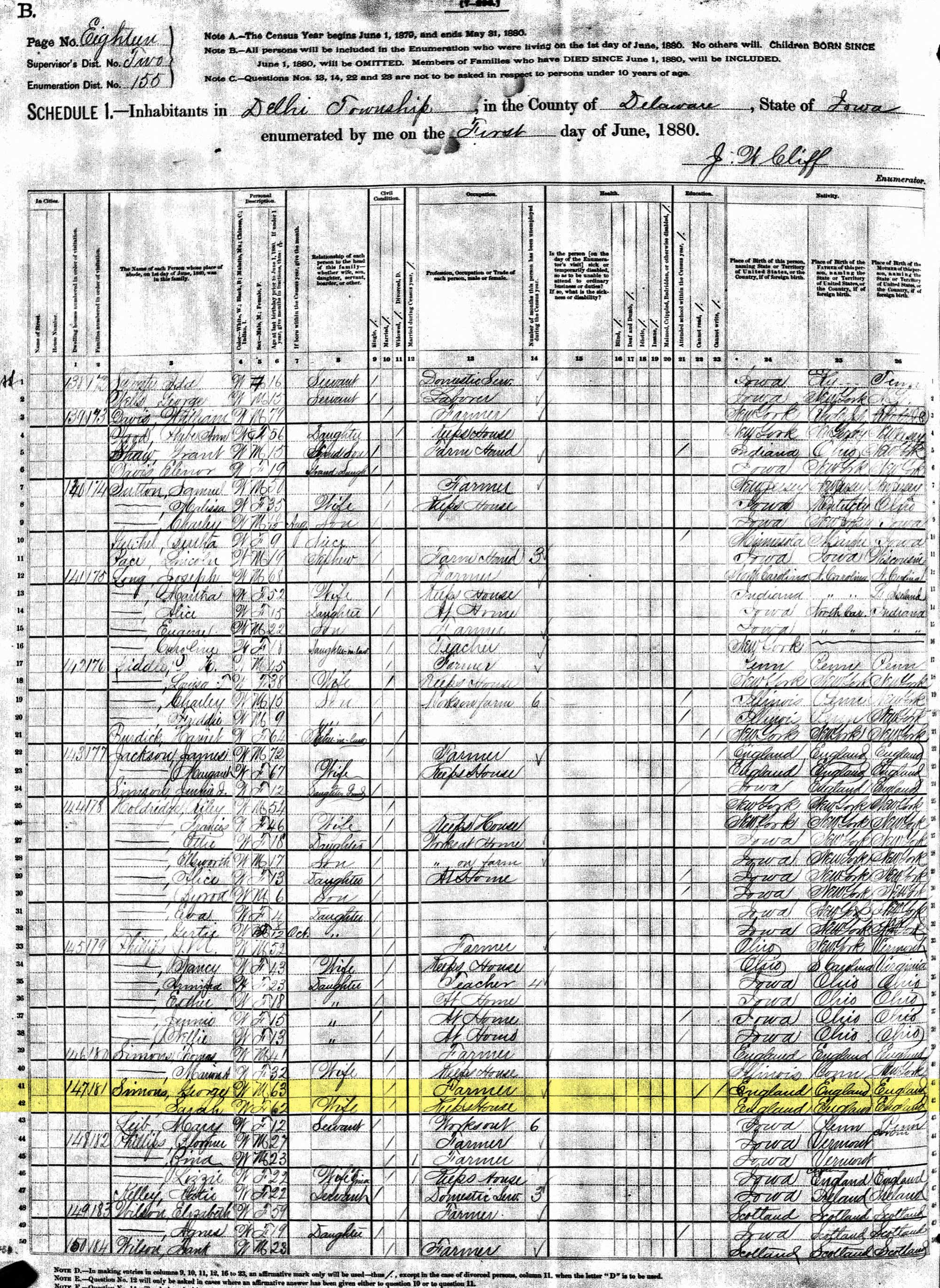 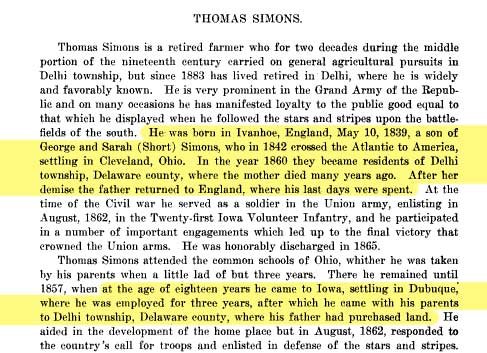 A More research is needed for confirmation, but grandson Fred Christian (through daughter Maria) visited the family from Ohio in late 1881-early 1882 after he had been diagnosed with Tuberculosis in July of that year. It was thought that a change of weather in Iowa might help him recover. It could be unrelated, but it's possible a contagious Fred got his grandmother Sarah sick and caused her death that November. 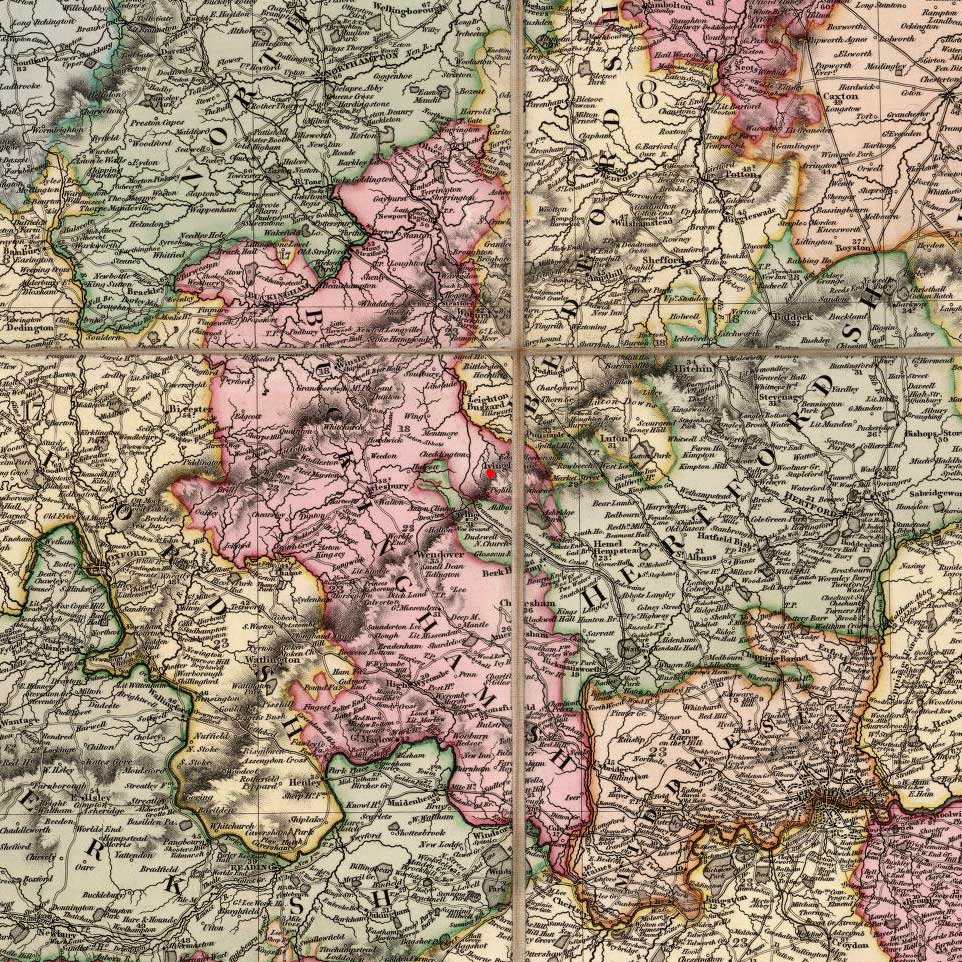 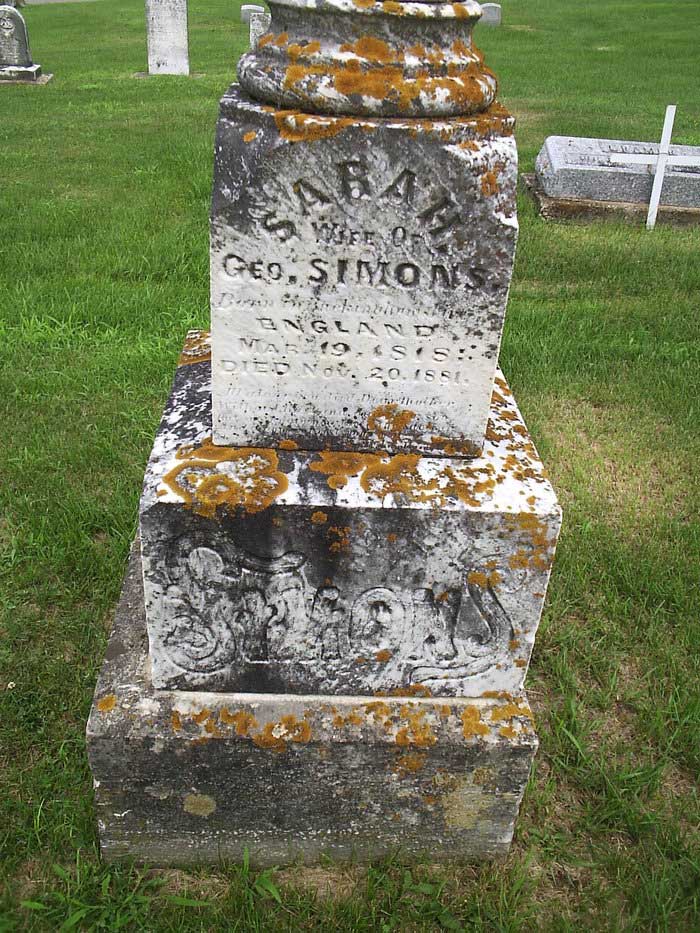