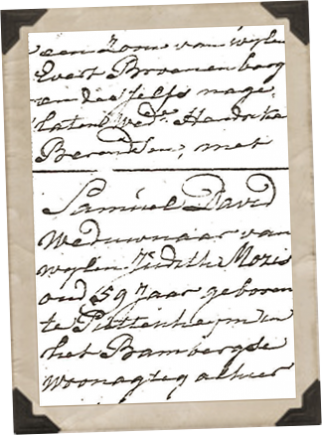 Based on discovered records, Samuel David Sterneveld (as he would later be known) was born in Buttenheim, Bamberg, Bavaria, Germany in the year 1748 (1751 per marriage).1 His father was David Heijman,2 yet his mother was not documented in record. Samuel and his family were Jewish and based on tradition Samuel's actual birth name was Samuel David, or Samuel, son of David.

This is the only information we know about Samuel's childhood and early life. Neither he nor his father make appearances in existing records for the next 41 years. At this point, it isn't even in Germany. Some time over the course of these missing 41 years, Samuel relocates north into the Netherlands.

It isn't until 18 Apr 1789 in Hengelo, Gelderland, Netherlands that we discover our first mention of Samuel David Sterneveld. On April 18th Samuel marries Judith Moses, daughter of Moses Isaak, in the Hengelo parish.2

The couple would settle down in Hengelo and start a family there. First was born a son, Hertz Samuels in 1790. A daughter, Judith Jacob, followed Hertz two years later in 1792.

Everything seemed well as there is no mention of the family of four over the next 15 years. That would change however on 9 April 1808 when daughter Judith passed away at 16 year old. From there, things spiraled downward quickly.

Son Hertz would marry in Hengelo 3 months later on 26 July 1809, but the celebration would be cut short as Samuel's wife Judith would pass away on the 23 Sep 1809. That would follow with the newly married Hertz's death less than 2 weeks later on 04 Oct 1809. Samuel David had lost his entire family.A

Although we can assume Samuel struggled with this loss, it didn't take him long to find a new wife. Five months later, on 12 March 1810, Samuel David married Rebecca Politz, daughter of Levi Politz, in Hengelo in the presence of Rebecca's brother Marius, mother Sijbilla, and a man known as Salamon Salamon. (The Politz last name is sometimes written as Polnitz or Polits)3

The couple started fresh and relocated about 15 km northwest to the growing Jewish community of Zutphen, which at this time had risen to about 100 members.

The following year in 1811 the Decree of Napoleon was issued after the French ruler took control of the Netherlands. This decree required all citizens of the Netherlands to register with the government under a common surname. This was a practice foreign to the Jews who along with many of the Dutch people lacked permanent family surnames, and instead used a patronymic naming system. (Many Jews took this extremely positively as Governments had frequently refused to recognize or except their Jewish populations and this was a Government mandated acceptance and inclusion of the people.)

On 11 Nov 1811, Samuel David, husband of "Rebecca Polits", registered his family in Zutphen under the surname STERNEVELD.B

The following year, Samuel and Rebecca welcomed their first son, Philip, in Zutphen on 4 July 1812. This would be followed two years later by daughter Judith (also written as Jetjen) on 14 Feb 1814.

Samuel was very involved with his community and was an integral member of his community. His standing is referenced in Zutphen's Jewish history records that note their struggle to build a new synagogue in the early 1800's. After the government's refusal to help them replace their current place of worship, which could no longer accommodate their growing community, a meeting was held and preparations were made on 19 November 1814 in the house of Samuel David Sterneveld. From there, funds were collected, the old synagogue was torn down and a new synagogue was built in less than a year (consecrated in September 1815).C

1816 was a rough year for the Sterneveld family. The couple not only had a baby that didn't survive childbirth on 28 Jan 1816, but then they lost their daughter Judith on 25 Jun 1816 who was only 2 years old.

On 27 May 1817, twin daughters daughter, Betje and Saartje (also written as Bettjen & Saartjen) were born to Samuel and Rebecca. They were followed by a son Jacob Samuel on 14 Oct 1820, however, Jacob only survived for 3 days and died on 17 Oct 1820. Daughter Rachel Sterneveld was born 25 Dec 1821 in Zutphen.

Samuel David Sterneveld died in Zutphen on 07 Feb 1823 at what was listed as the age of 75. He was a hostel owner. We have no record of his place of burial.D

At the time of Samuel David's passing his wife Rebecca was three months pregnant. She would later give birth to a son, Samuel, on 04 Aug 1823. 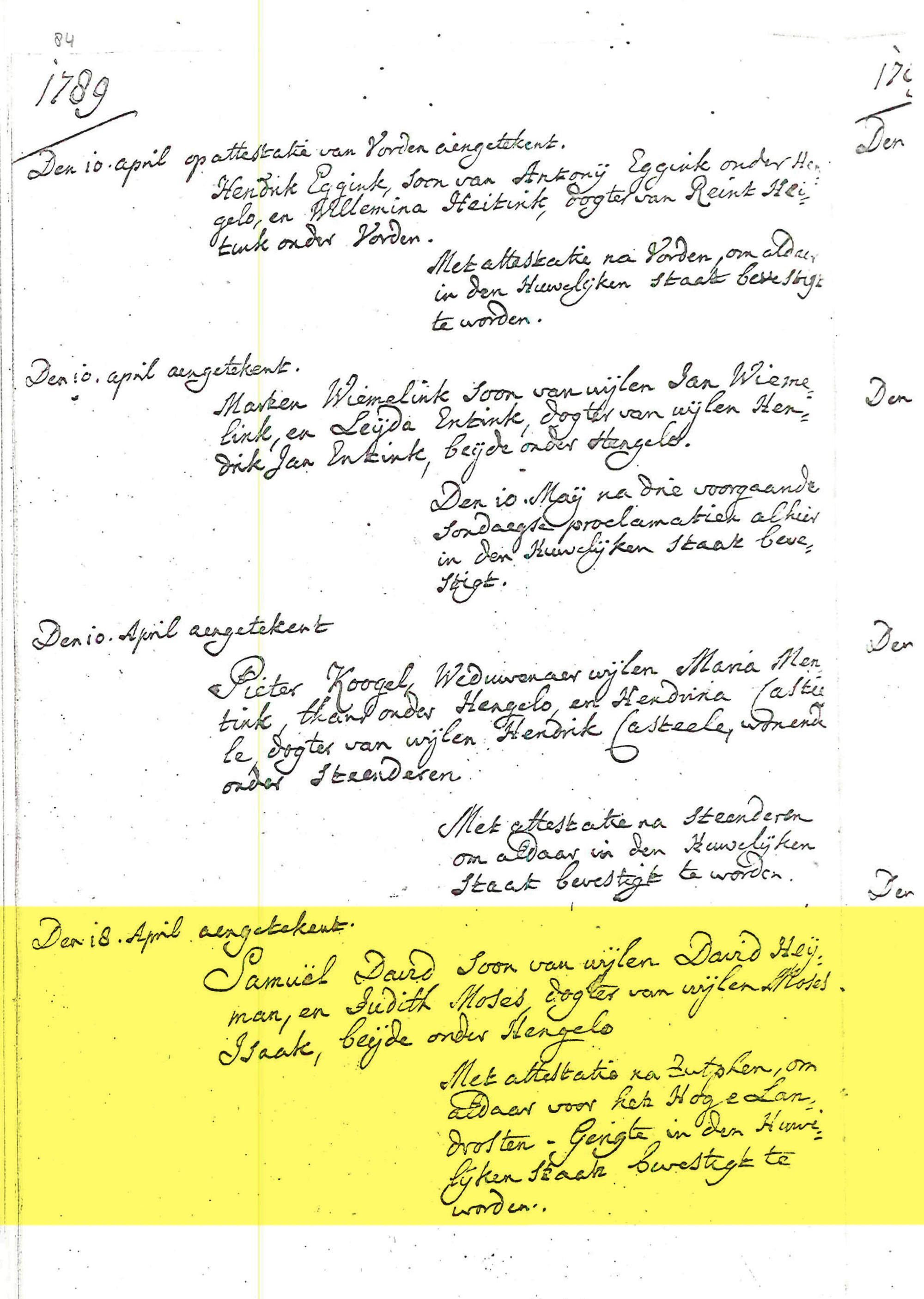 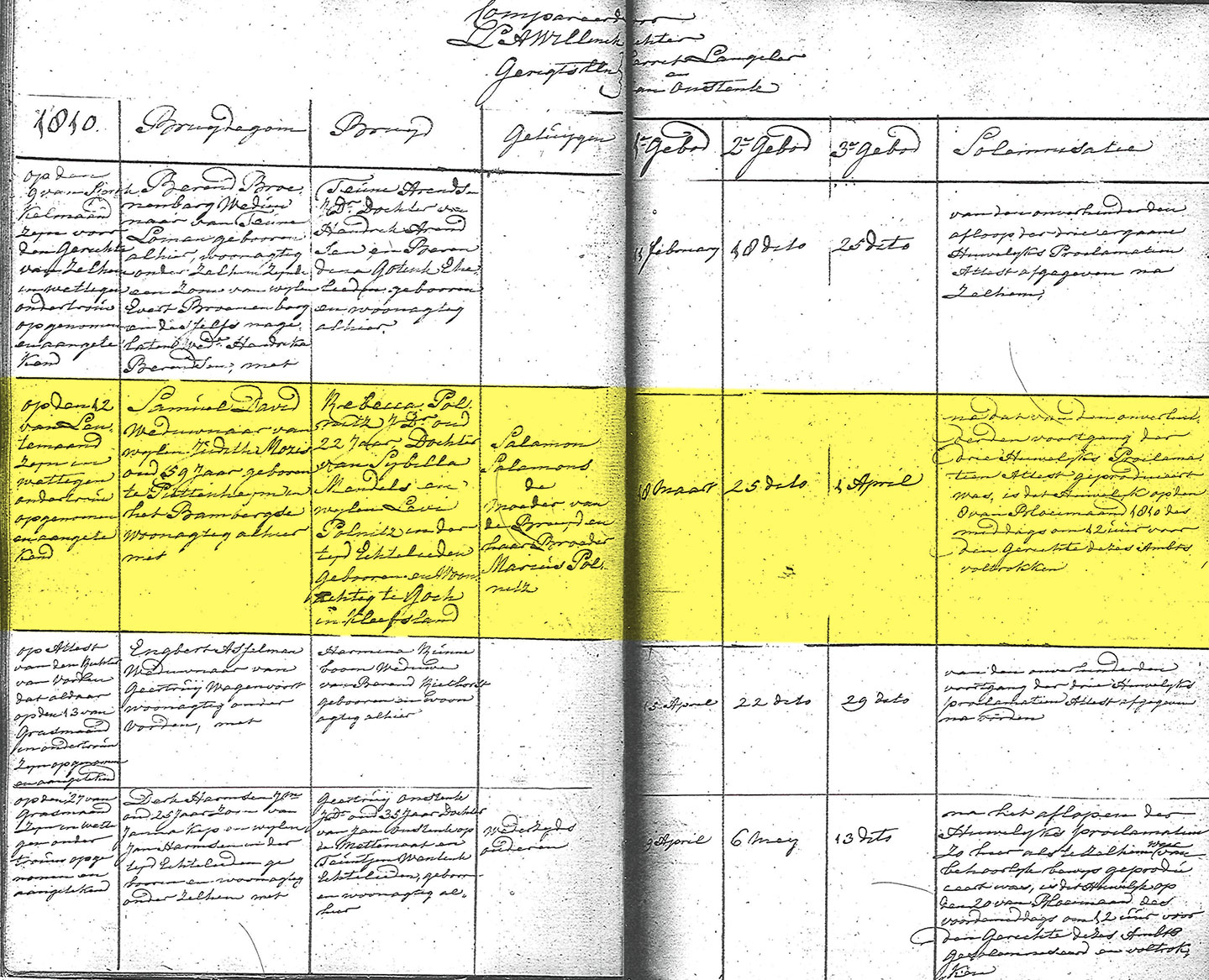 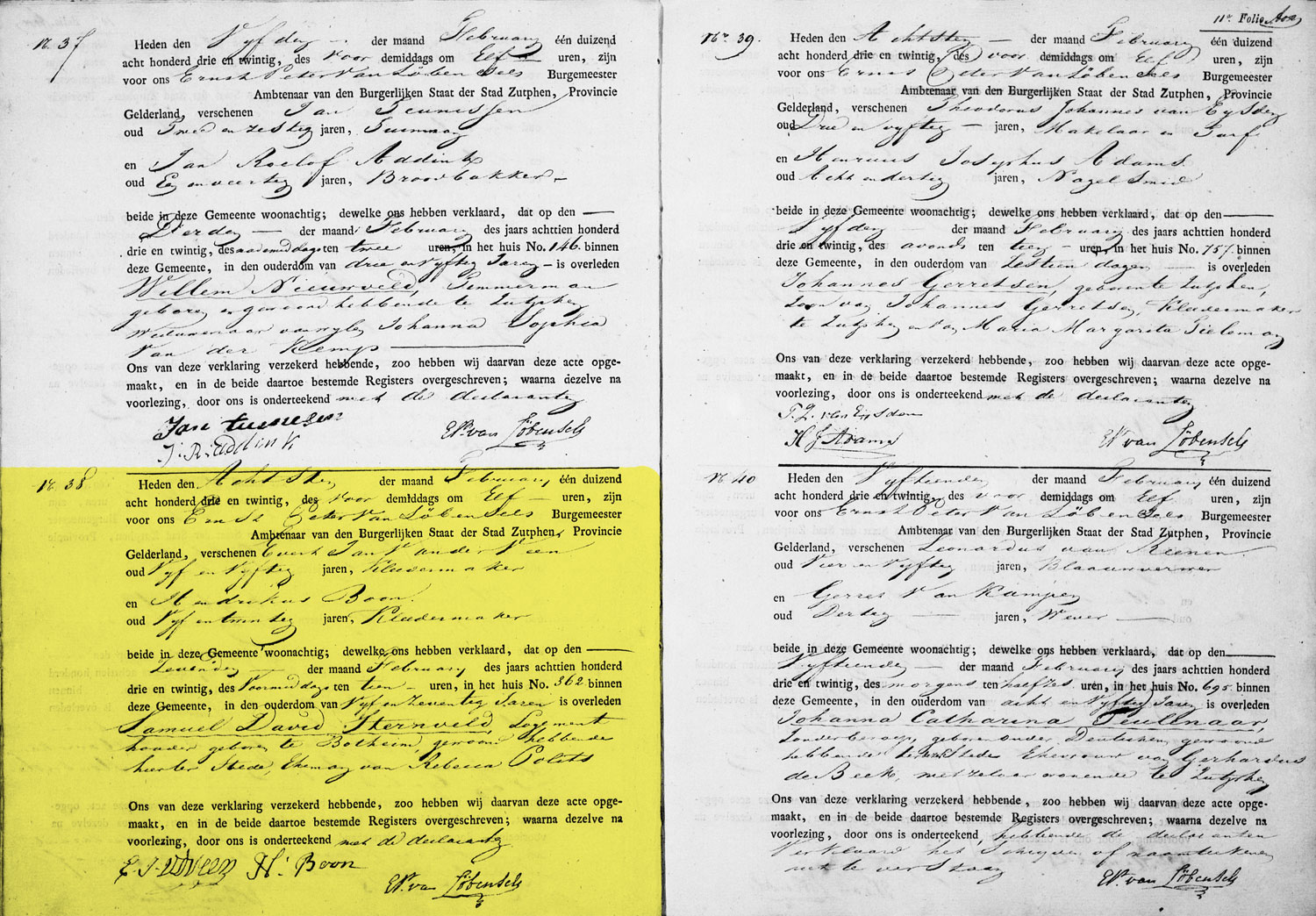 A While it's just an assumption, but based on historical records of many Jewish communities, they usually existed on the outskirts of towns. The communities were poor ghettos closed off from much of the greater community and unsupported by local or national governments in any way. This forced seclusion leading to conditions would regularly cause the spread of disease. This was so common, that during the plague, Jewish communities were severely discriminated upon and even chased out of town as some people fearfully believed they were the cause of the plague. If Samuel's community was in such a shape to be considered a ghetto, then it's not a stretch to believe the death of his family would have been related to some contagious disease moving through the community.

B From what I've been able to tell, the Sterneveld name with the silent extra "E" was used exclusively by Samuel David. Anyone else that registered under the name spelled it "Sternveld". This distinction continued in the decades following. Any census or birth records using the name Sternefeld with the silent "E" can be connected to Samuel David. As far as I'm aware, two centuries later, the same holds true for the Sternefeld name.

C The Sternevelds have history in Zutphen going back to Samuel David Sterneveld who was registered there per Decree of Napoleon in 1811... an excerpt from the Jewish history of Zutphen has this to say:

Around 1810 the number of Jews had risen to about 100, so the building [synagogue] had become too small. The kehilla [congregation], therefore, asked for help from the Government, which put neither any money nor a location at their disposal and so they decided to build a bigger synagogue by themselves.

Preparations therefore took place on November 19th, 1814 in the house of Samuel David Sterneveld. The old synagogue was torn down and the old materials were used as much as possible for the new one. Money was collected one way or another and for the amount of about 8300 guilders a nice synagogue was erected. In September 1815 the building was ceremoniously consecrated. (Sourced from http://www.dutchjewry.org/drieluik/zutphen/zutphen.shtml)

D During WWII, actions were taken by local Nazi sympathizers in the Zutphen community to desecrate the Jewish Cemetery in Zutphen displacing, removing and destroying many of the headstones of the departed Jewish residence of the town. All in an effort to wipe away their neighbors existence from history (these actions were not exclusive to Zutphen as this was happening all across Europe).

Botheim, Germany does not seem to exist by that name anymore. Where was Botheim as it was written in 1823? Also written as Buttenheijm in Bambergse in 1810 (Seems to appear that he was from Buttenheim, Bamberg, Germany) 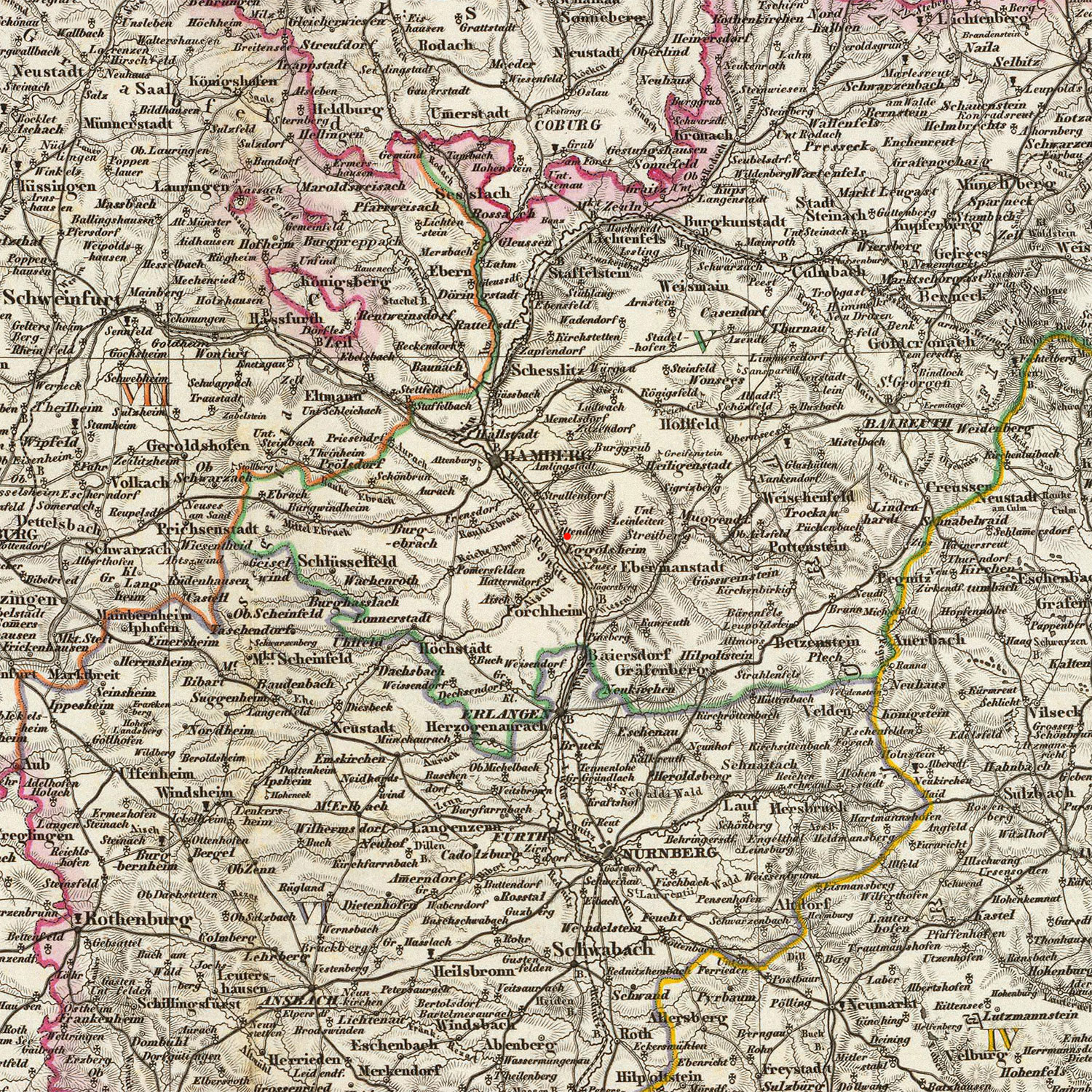