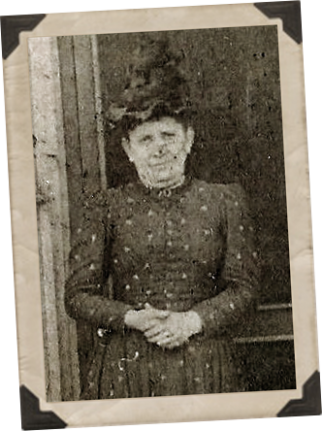 Simons Family 1841 England CensusMaria Susan Simons was born on 02 Jun 18411 at Great Gap, Ivinghoe, Buckinghamshire, England in the Leighton Buzzard District. She was the second child and the first daughter born to parents George Simons and his wife Sarah Short.2

By some miracle, she was born 4 days before the census taker visited her family home at Greatgap in Ivinghoe. He noted that "Mary" (Maria) was living with her parents and older brother Thomas. Next door were her aunt & uncle Ethelred & Rachel (Simons) Collyer and on the other side her grandparents Jesse and Mary Simons were working Vicarage farm with her grandfather's brother Jonathan Simons.

Even though Maria was born in England, she didn't live there long; less than a year, actually. Maria's family departed from London aboard the ship "Philadelphia" around the 14 May 1842, bound for America with her parents and older brother Thomas, her aunt & uncle Ethelred and Rachel Collyer, and Ethelred's brother's family. Their ship arrived at port in New York, New York on 30 May 1842.3

After immigration, Maria’s parents made their way to (North) Royalton, Cuyahoga, Ohio where Maria lived with her 3 brothers Thomas, Jesse & Edward and can be found here on the 1850 census.4

What happened over the 8 years before the census and the 7 years after is up for debate. Some stories say the family temporarily returned to England for a short period of time. Multiple obituaries and town biographies of family members state something to the affect that the family returned to England in 1847 and back to Ohio in 1852. Problem is, there is no documentation supporting their travels and the 1850 US census says otherwise. If the family did return to England, the dates we have are all wrong.B

The same confusion can be had about Maria's meeting of her husband and their marriage in the nearby village of Berea. I can only make assumptions as North Royalton and Berea had 2 towns and about 10 miles between the villages... and plenty of other tailors. We are able to glean from the wording of Maria's obituary that she was not from Berea and didn't live their until she married.

Simons Arrival Manifest (1842)On 26 Nov 1857, Maria Simons married Edward Christian in Berea, Cuyahoga, Ohio.5 A newspaper article from their 50th Anniversary explains in detail "November 26, 1857, in the presence of a number of invited guests at the residence of T.J Quayle, on Seminary Street, Berea, Ohio. Mr. Edward Christian and Miss Maria Simons were united in marriage. The ceremony was performed by Rev. E.P. Clisbee, then pastor of Berea Congregational church. Miss Lucy Baker (Woodbridge) and Mr. C.F. Peebles of Berea were bridesmaid and best man respectively."6

It should be noted that T.J. Quayle applied for and signed a marriage application for Edward and another for himself a few days before the wedding took place. We do not know if they had a double wedding that day at T.J.'s house or not. The paper never mentions it.5

Edward and Maria would live at 95 Beach Street in Berea, Cuyahoga, Ohio and raised a family there. They had 6 sons and 3 daughters. Edward’s Real estate was valued at $2500 and personal estate at $3000.7

Shortly after Maria's marriage to Ed, Maria's parents and the rest of the Simons family picked up and relocated from Ohio to the wilder frontiers of Iowa to answer the call of manifest destiny and claim cheap land of their own.

50th AnniversaryEdward opened his own Tailoring Shop on Front Street in 1861 in Berea, Cuyahoga, Ohio and was in business for over 50 years until he passed away.8

On 09 Oct 1867 in Berea, Edward became a member of the Masonic lodge of Berea. Ed was one of the 16 founding members, or "Master Masons". Edward remained a Mason until his death 50 years later. His official title was "Captain of Host" for Berea (Quarry) Masonic Lodge, Chapter No. 134.9

By 1879, Edward had become a well respected member of the community, as he was officially holding the title of the President of the Berea board of Education.10

In 1896, Edward Christian ran for and won a local election to become Mayor of Berea. A position he held for one 2 year term 1896–1897.11 His time as mayor was not without great obstacles. Edward had two noteworthy issues he had to deal with during his time in office. The first being the Berea Quarry Strike. Workers went on strike at the quarry, Berea’s main source of income and work for residents, and Edward had to help mediate and provide police protection after violence broke out and the quarry president declared that he would hold the village of Berea responsible for any and all damage to company property as a result of the strike. Edward responded by appointing a strong police force to patrol the village at night, protecting the citizens and businesses.12

Notice of Maria's Death (1911)Edward’s second great test as a mayor came on 23 April 1897 at about 5:45am when a great fire broke out in gale-force winds between Front, Bridge & N Seminary Streets and threatened the Council Hall. Ed sent a telegram to the Cleveland Fire Department requesting help as the village fire departments equipment was unable to handle the rate at which the wind was causing the flames to grow. Edward then proceeded to enter Council Hall with others and managed to save many of the town books and valuable papers. At the end of it all 30 buildings, including the village fire department, were lost to the flames. A total estimating $100,000 at the time. The newspaper that day read "Berea's Greatest Fire…Many Business Houses on Front and Bridge Street Laid Low…City Hall in Ruins."13

On Thanksgiving Day 1907, the local newspaper reported that "the sons and daughters planned a grand reunion in honor of their 50th wedding anniversary. The children all came together, (except Willis and Ralph) and a most pleasant occasion it proved to be. After a sumptuous dinner, the family, consisting of parents, children, 14 grandchildren, and two great grandchildren were grouped for a portrait by [photographer] Mikolajcyk. Among the guests were Mrs. Christian's sister, Mrs Robinson (Mary Ellen Simons) and daughter from Earlville, Iowa."6 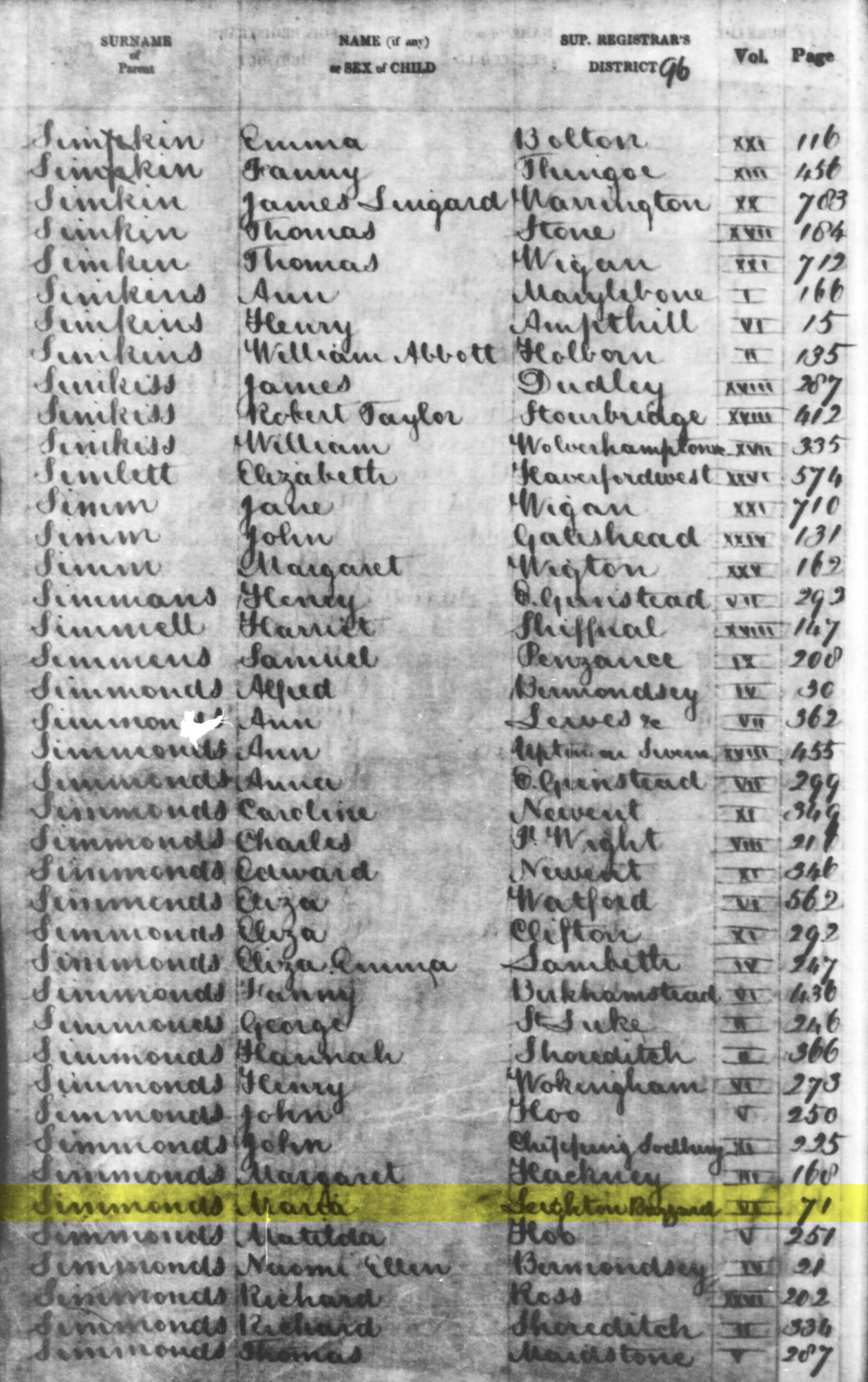 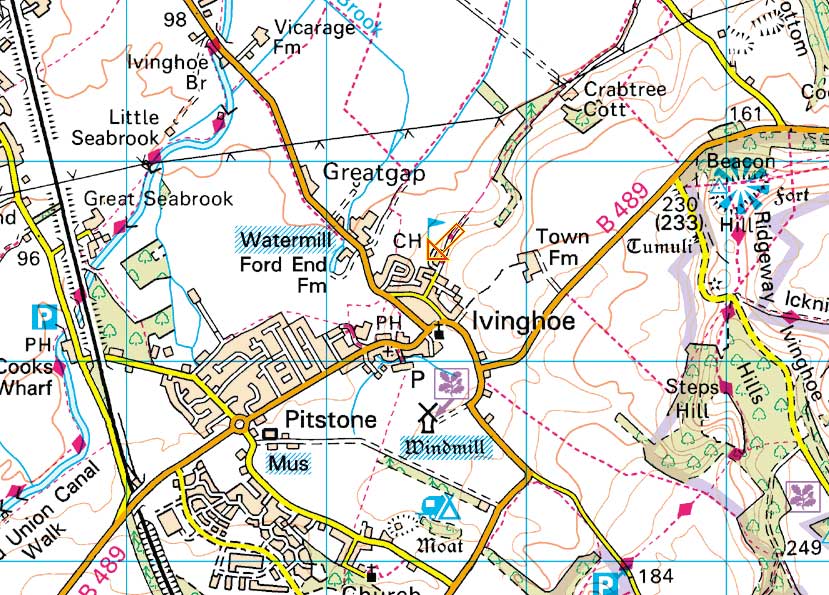 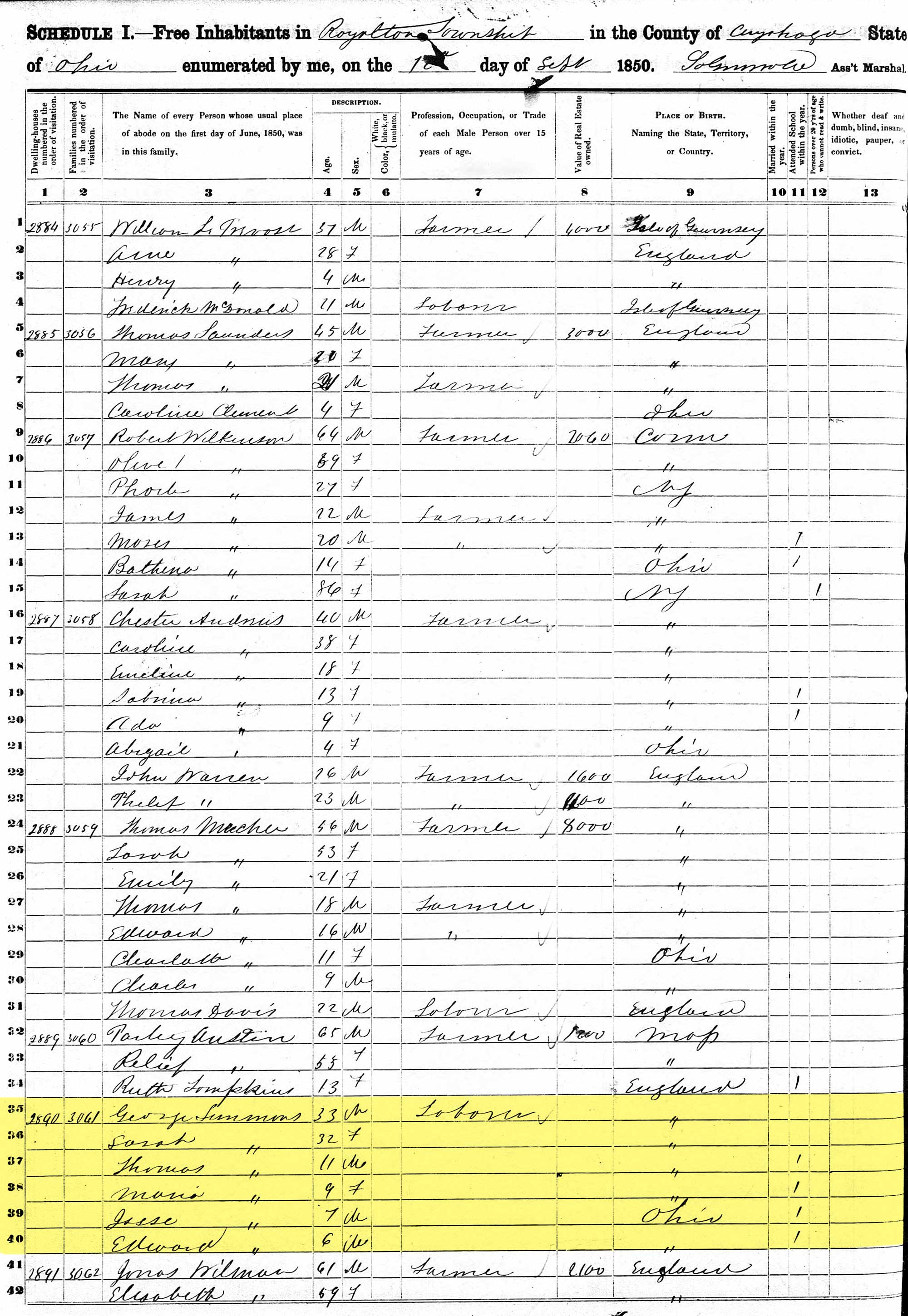 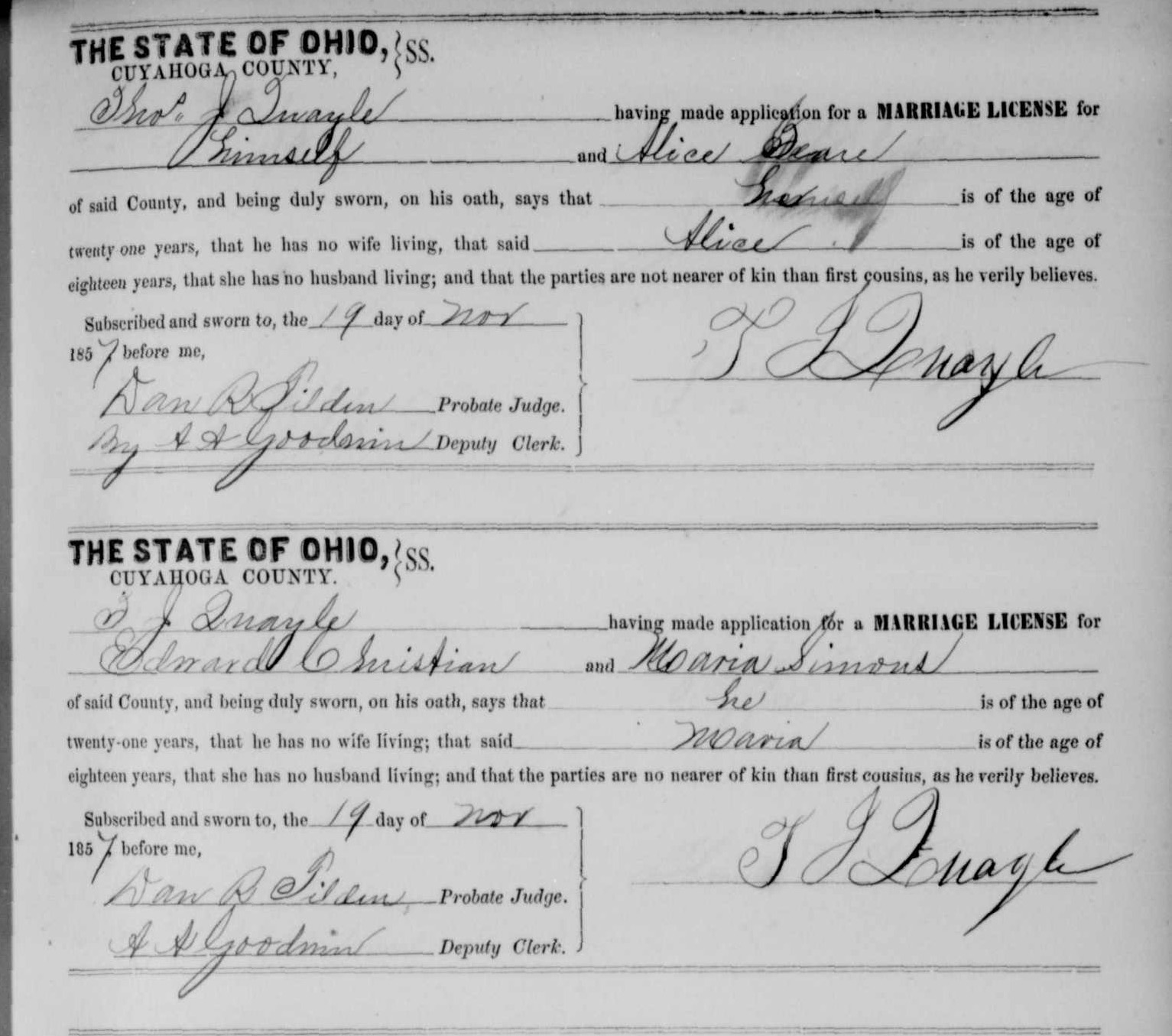 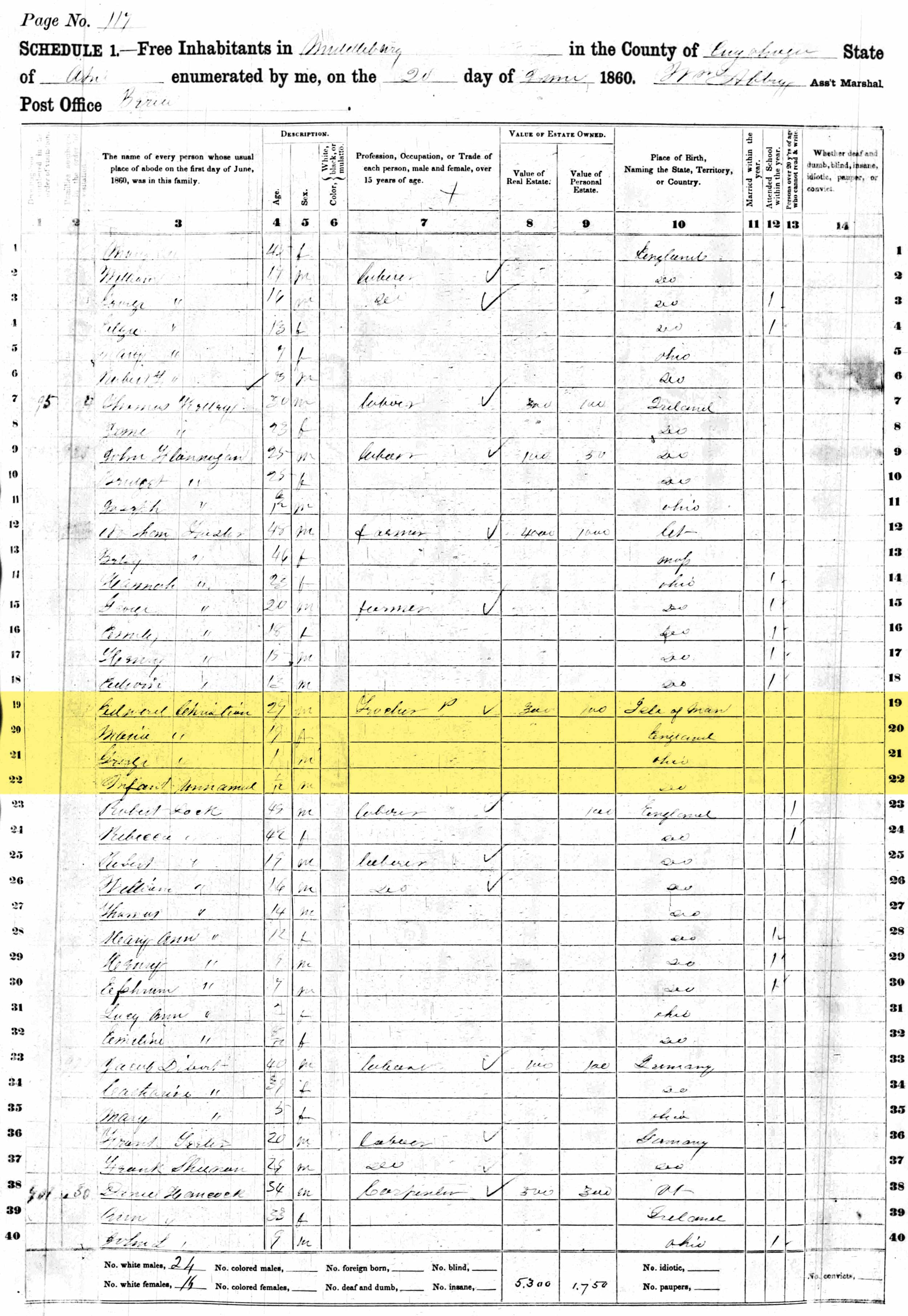 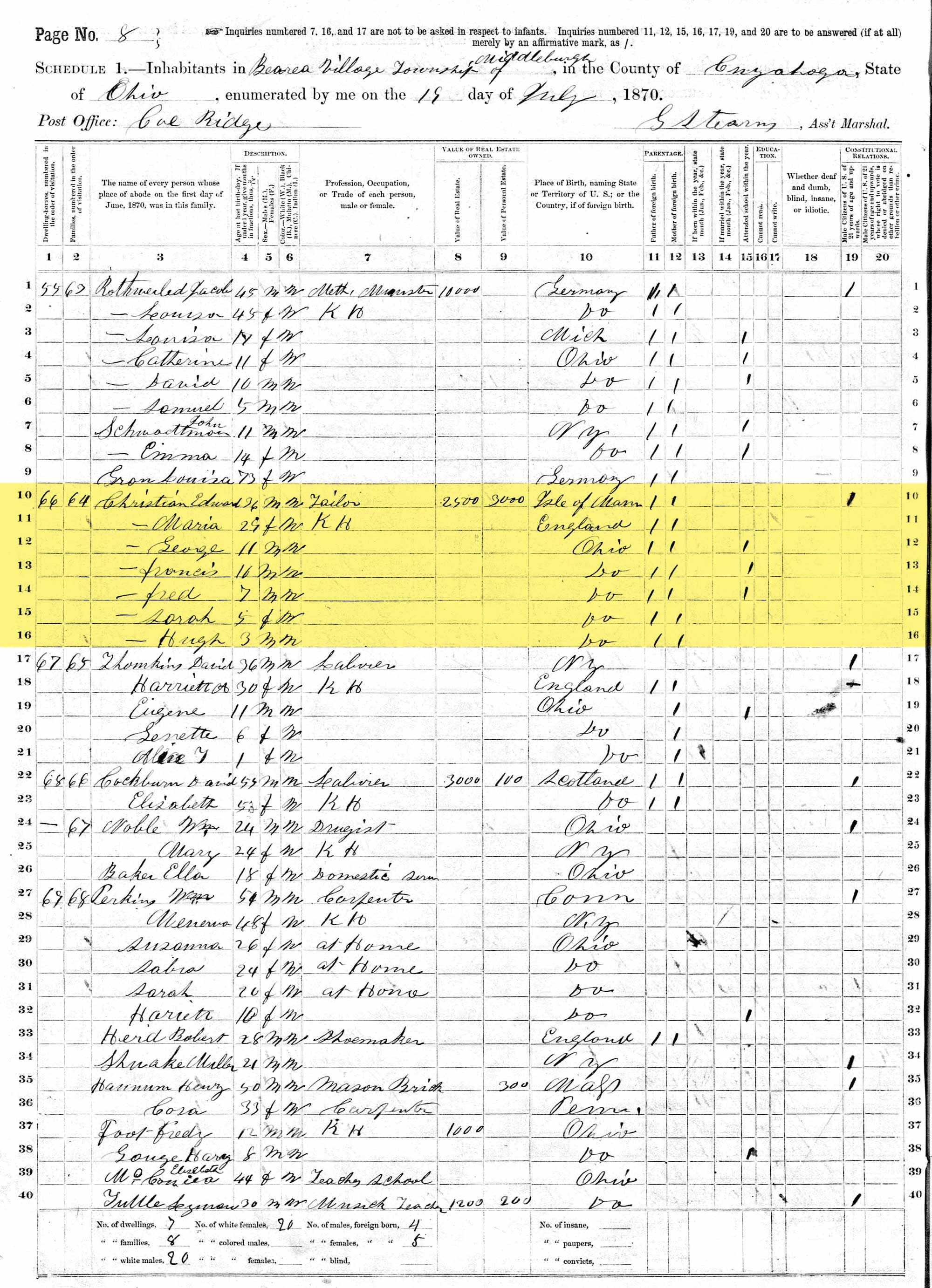 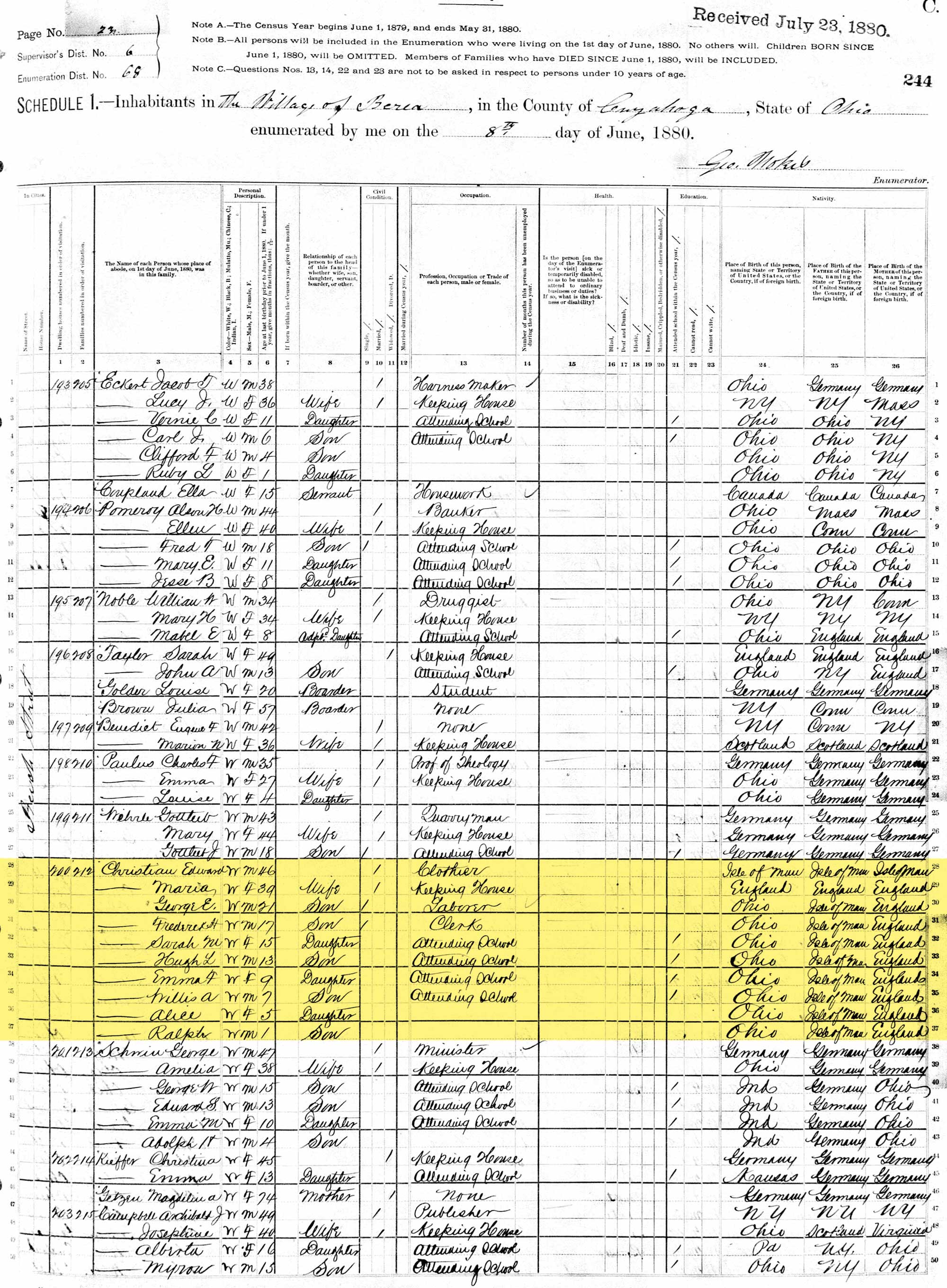 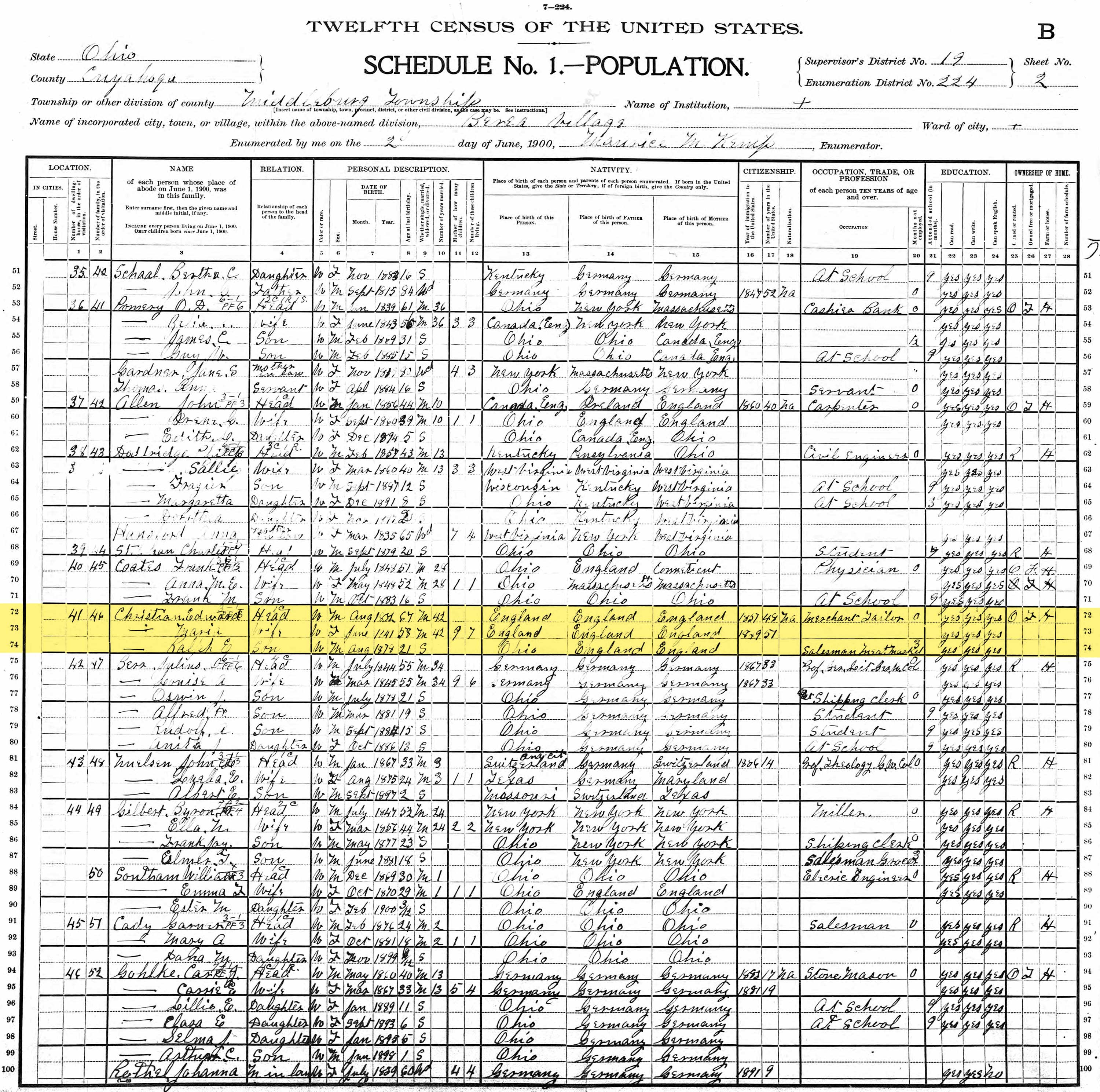 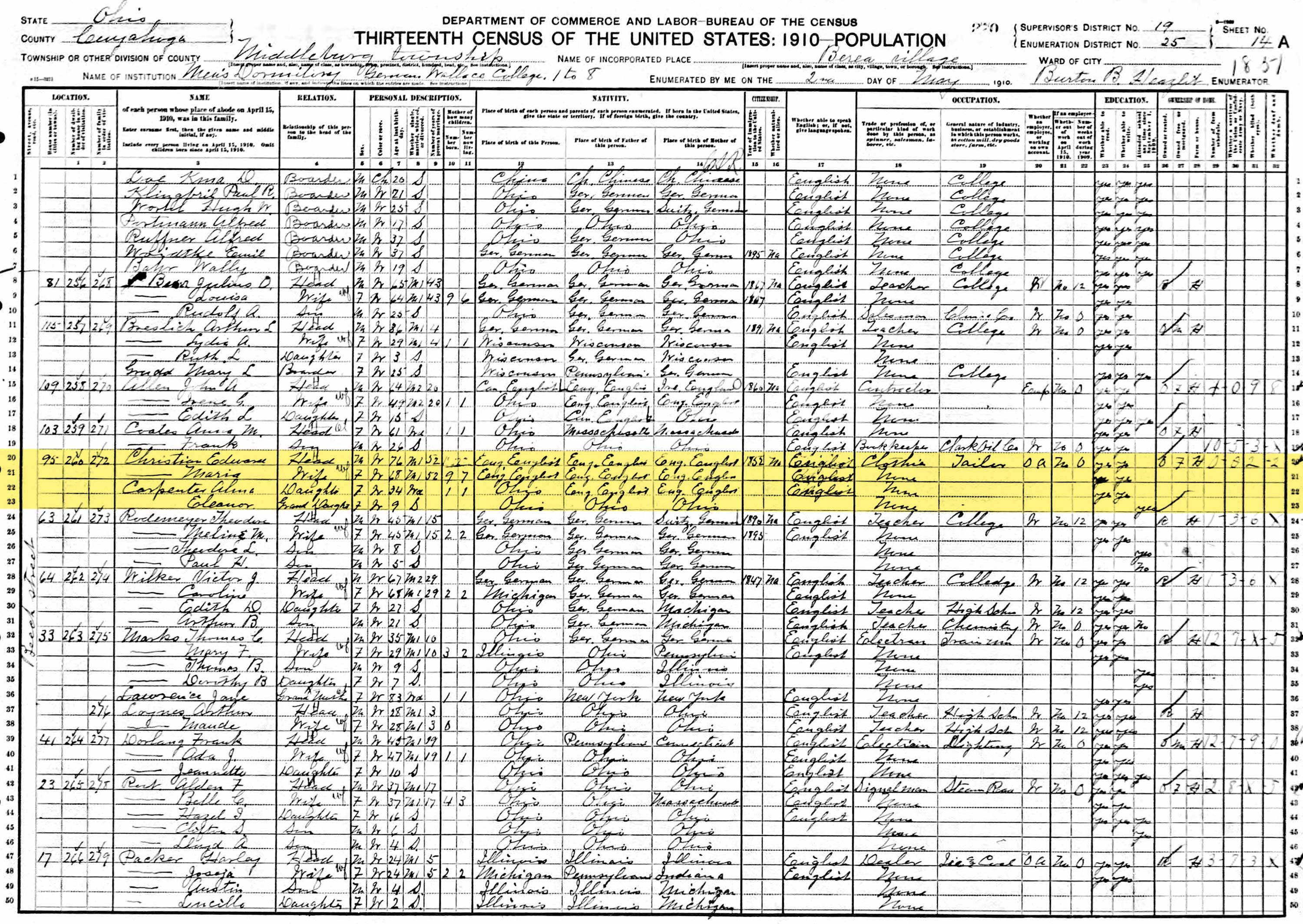 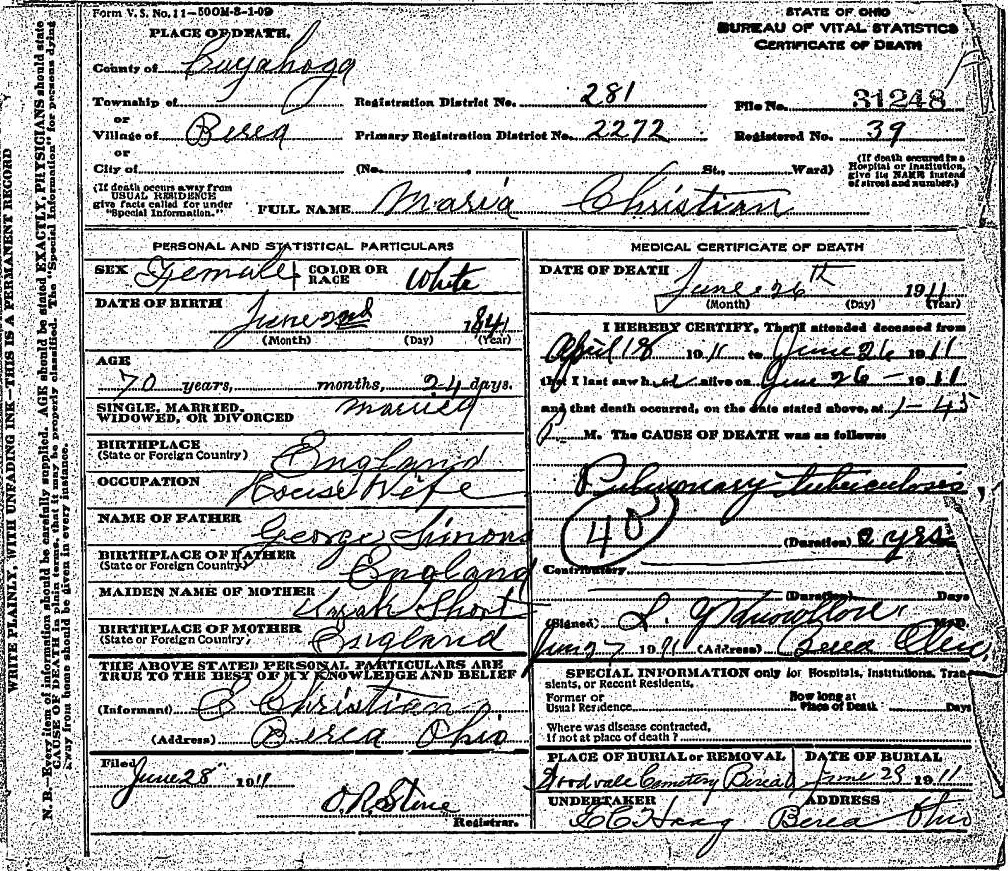 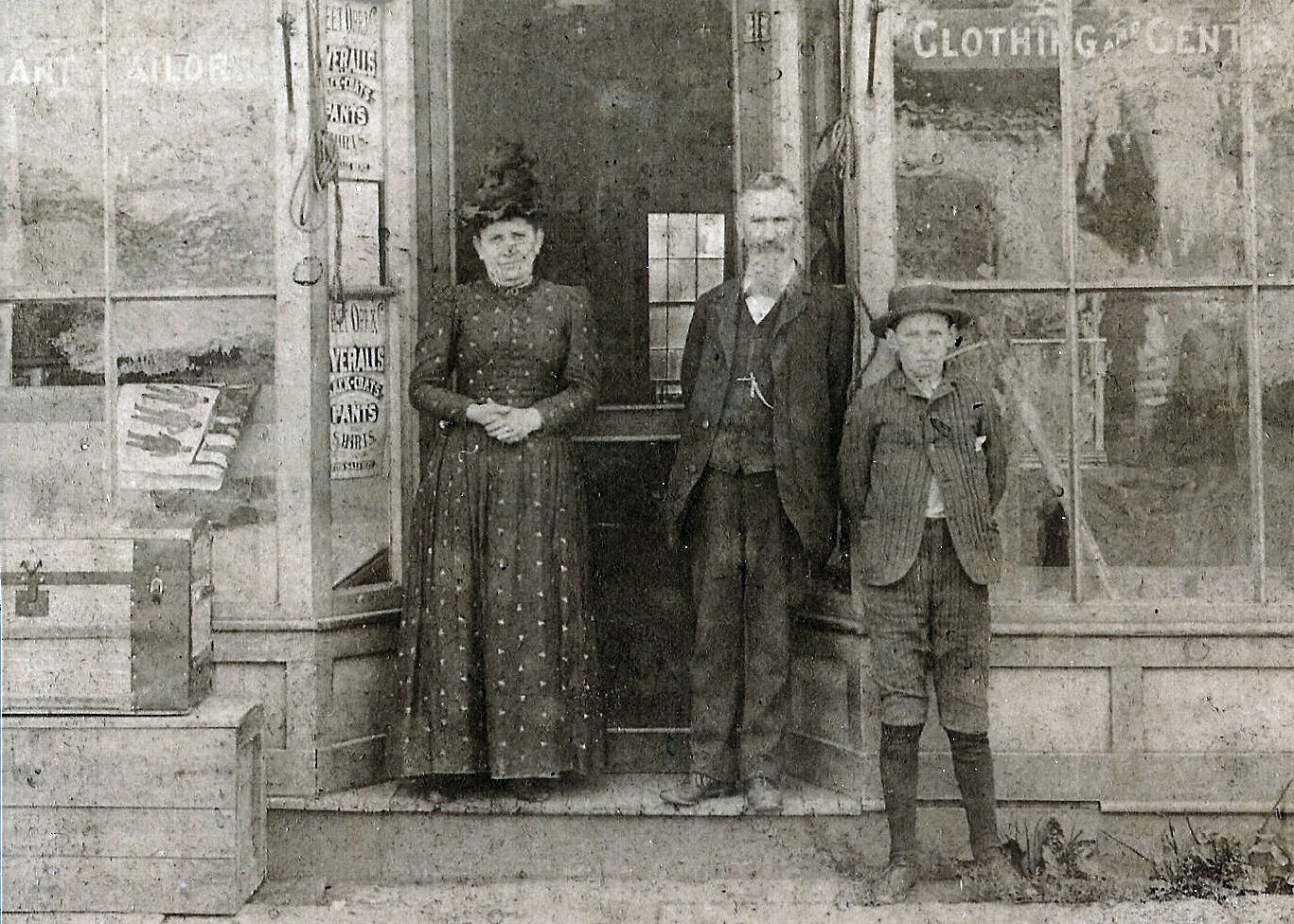 A A cousin with closer connections to Maria (my ancestors lost touch with the majority of Ed Christian family after George died young) relayed her middle name as Susan. Maria's husband Edward kept a "family bible" containing names and birth information inside an 1845 copy of "An Historical and Statistical Account of the Isle of Man, Vol. 1" by Joseph Train, FSA Scot, published 1845 in Douglas, London, Liverpool & Glasgow. It is in this book that Ed documents Maria's full name.

B Maria's obituary echos a biography of her father (including other sources) that state the family arrived in the USA in 1842, returned to England in 1847, and came back to Ohio in 1852. While I am now inclined to believe that the family may have returned to England early on, I do not believe the stated time frame is accurate. The family is officially documented on the 1850 US Federal Census as being in North Royalton, Ohio at the time when they are supposed to be living in England. I have also been unable to find the family on ANY immigration manifests returning to America around 1852.

I may have uncovered a reason for the family's return to England. I have been unable to located any records of George's sister Rachel or her husband Ethelred in America even though they arrived on the ship with George's family. At this point I believe Ethelred passed away and George took Rachel back to England where it appears she remarried in 1849 to a James Darvill. She lived in Tring until her death in 1892.

C Maria's birth was registered under the name Maria SIMMONDS. This mirrors the registration of her brothers Thomas and Edward births. Edward's death a few weeks after his birth is also under SIMMONDS. This is in stark contrast to marriage record of aunts and uncles who were written as SIMONS and census records listing SIMMONS. All of this just shows there was no emphasis on spelling, only fairly accurate pronunciation (and a silent "d"?). 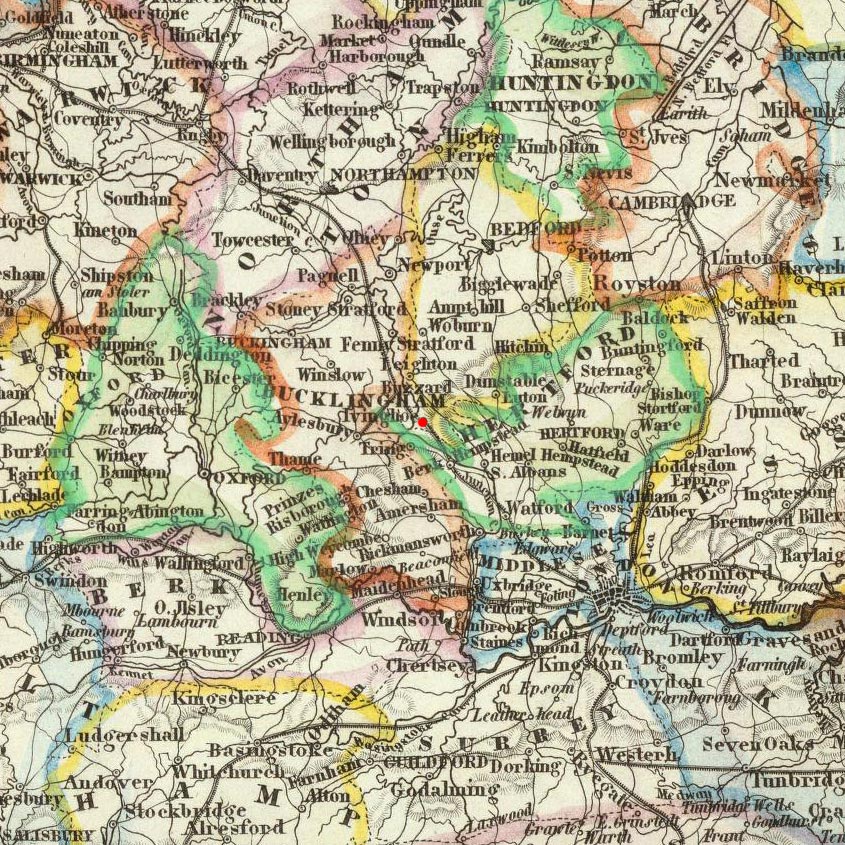