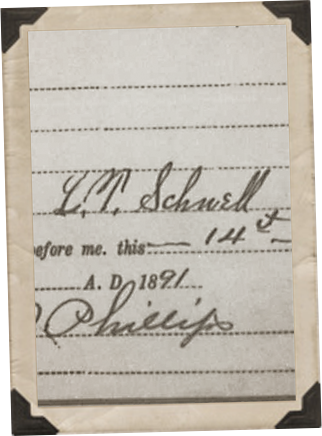 Sometime before 1870 the family relocated to the northwest corner of Marks & Boston Roads in the small village of Beebetown (officially known as Columbia Township, Lorain, Ohio). Beebetown would become the Schnell family home for the next 80 years.

Leonard was raised with siblings Samuel, Priscilla, Phebe, and Carl (also known as Charles). He had a half-brother William, but by the time Leonard turned 2, William left the house and joined the Union to fight in the Civil War (107th OVI Co. E). While he did return to the area for a while to work for local farmers, there's no evidence to say he returned to live with his family. (Another brother, Louis, moved to Iowa with Leonard's grandparents, the Rauchs, where he also enlisted in the Civil War. He was captured by the Confederates at Shiloh and died in jail in Atlanta, GA on 6 Jul 1862)

This was the family makeup by the 1870 census, but that changed on 15 Sep 1878, when younger brother Carl tragically died (currently unknown causes, research newspapers). He was only 11 years old.

The Schnell family continued to live on the county border in Beebetown, however on 27 Feb 1881, while Leonard was only 20 years old, his father died at 74 and left behind Leonard to take care of his two sisters and mother.

On the 18 Feb 1891 in Medina County, Leonard T Schnell married Cathrina Betsicover. They were married by Rev. Albert Van Camp of Brooklyn Church after applying for their license 4 days prior.

The next record we have isn't until nine years later when the Schnells are counted for the 1900 census. Here Leonard is counted with his wife "Katy" and a yet unnamed son [Harold Leland Schnell].

By 1910, the family farm is listed under the now non-existent street name of Ruden Road East. (Nothing leads me to believe the family moved, only that a street name was applied to their rural address.)

On 27 Jan 1911, the Leonard and Kate welcomed their second child, Ralph Oliver Schnell, into the family. At the time, Leonard was 50 and Kate was 43 years old.

In 1912, the family farm was again documented as being on the corner of Marks and Boston Roads in Beebetown, right next door to to Leonard's sister Phebe Schnell-McConaughy and her children. The two families share ownership of plot 10 at Range 15 W - Township 5 N.

Not much additional information can be obtained through the teens and twenties, but the 1930 census does add some interesting tidbits of information worth noting. Their street name is no longer Ruden Road even though the family hasn't moved (the family lived in Beebetown through the 1940s). By this point the road is now listed as Methodist Road. I assume this refers to what is now Marks Road as the local church was a few hundred feet south of the family farm, both on Marks. The census also notes that the family farm was valued at $12,000 and that the family owned a radio.

Sometime around 1930 Leonard's health started to decline. Around 1 January 1932, Leonard was admitted to Southwest Hospital in Berea. They made a diagnosis and scheduled an operation for the 21 Jan 1932. The "punch operation" performed confirmed their fears, Leonard had prostate cancer. There was nothing they could do but make him comfortable.

Leonard died at Southwest Hospital in Berea on 6 Febraury 1932 at 2:30 am. He was 71 years and 6 months old. Three days later he was buried in Columbia Center Cemetery in Columbia Station, Lorain County.

Other than the basics, not much is known about Kate's childhood. She was raised in Liverpool Township outside Valley City with eight siblings John, Henry, Emma, Mary, Barbara, Joseph, George and Saphronia. Kate was the youngest child to make it to adulthood. Her younger sister Saphronia and older brothers George and Henry would all die before Kate's seventh birthday.

The summer following Leonard's death, younger son Ralph would marry his wife Edna Rogers. The new couple would move onto a house on the Schnell property next to the family home where Kate lived with older son Harold.

In 1940 we learn Kate, now 72, only achieved the equivalent of a 6th grade education in her life.

Kate died of Coronary Thrombosis on 07 Oct 1946 in Beebetown. A death notice in the local paper said she was a part of the community for 55 years. Kate was buried in Columbia Cemetery with husband Leonard on the 10 Oct 1846. 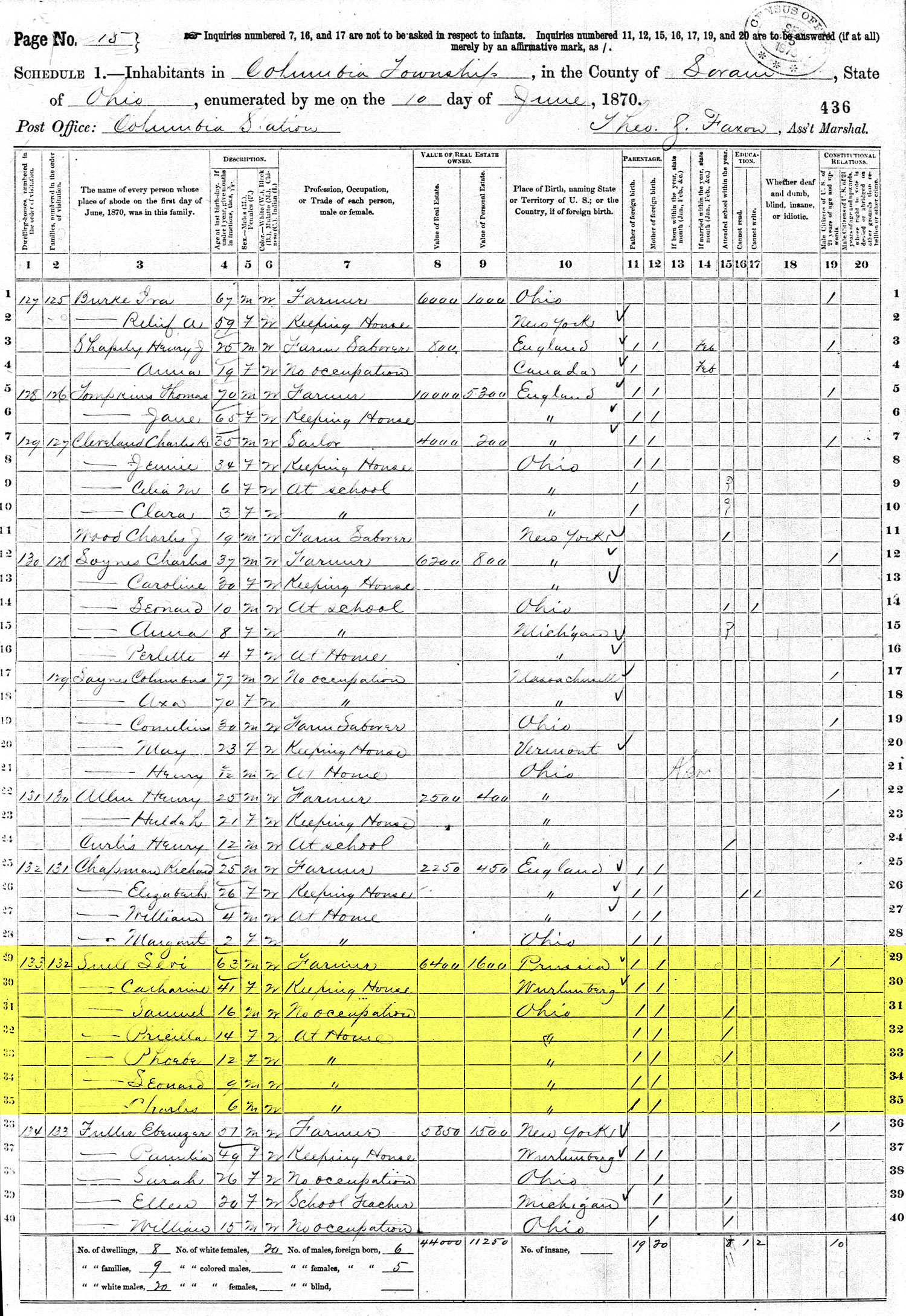 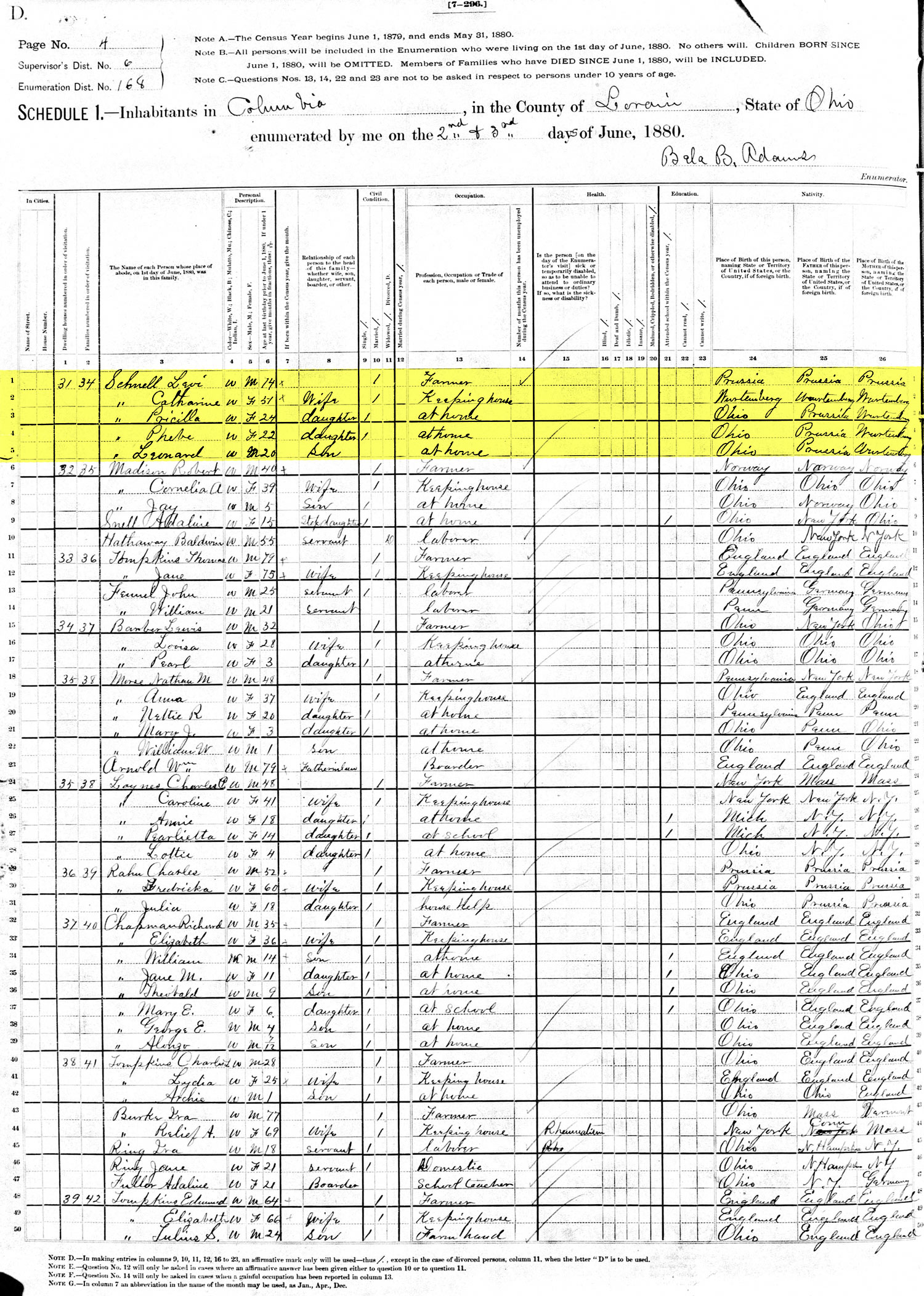 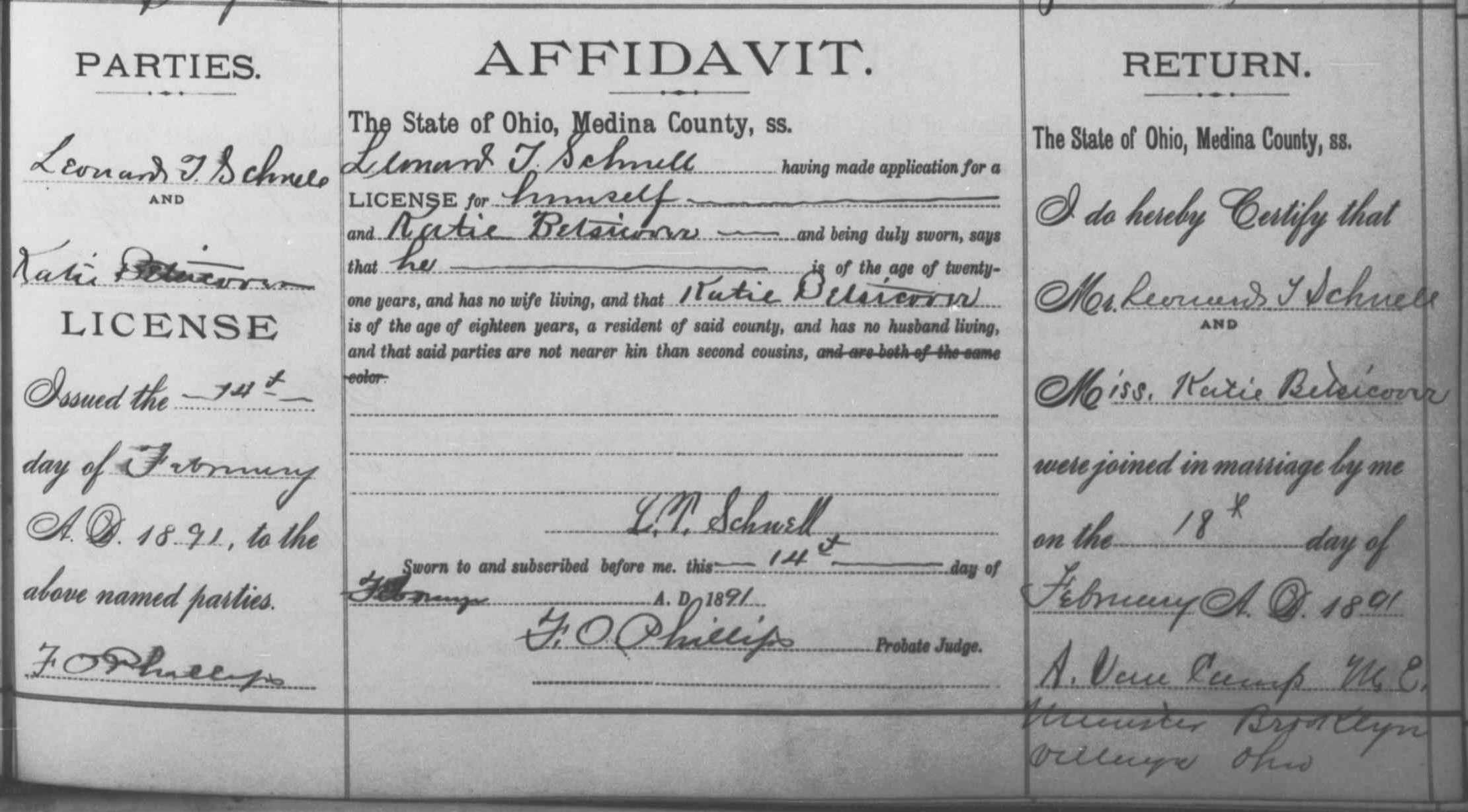 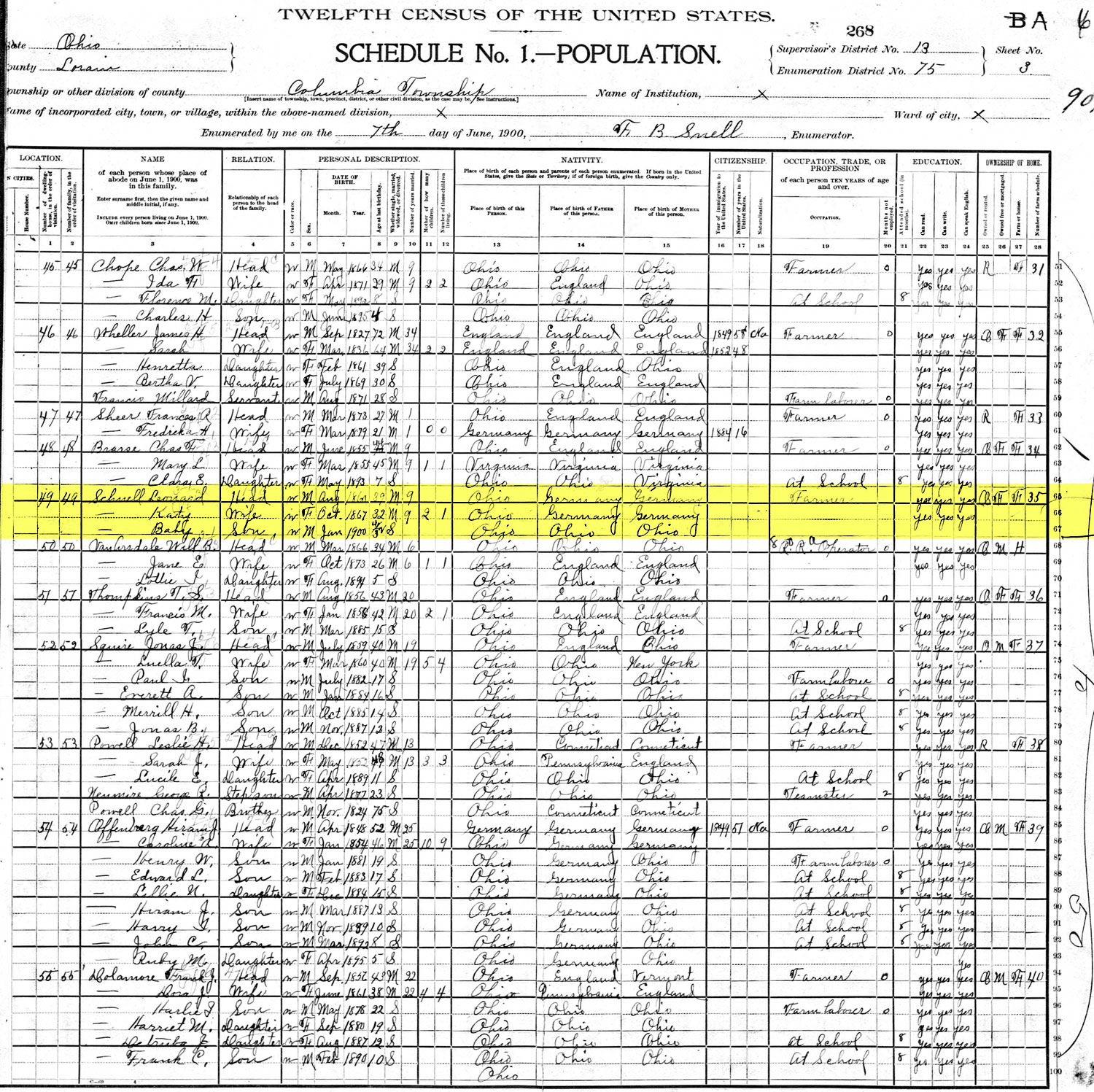 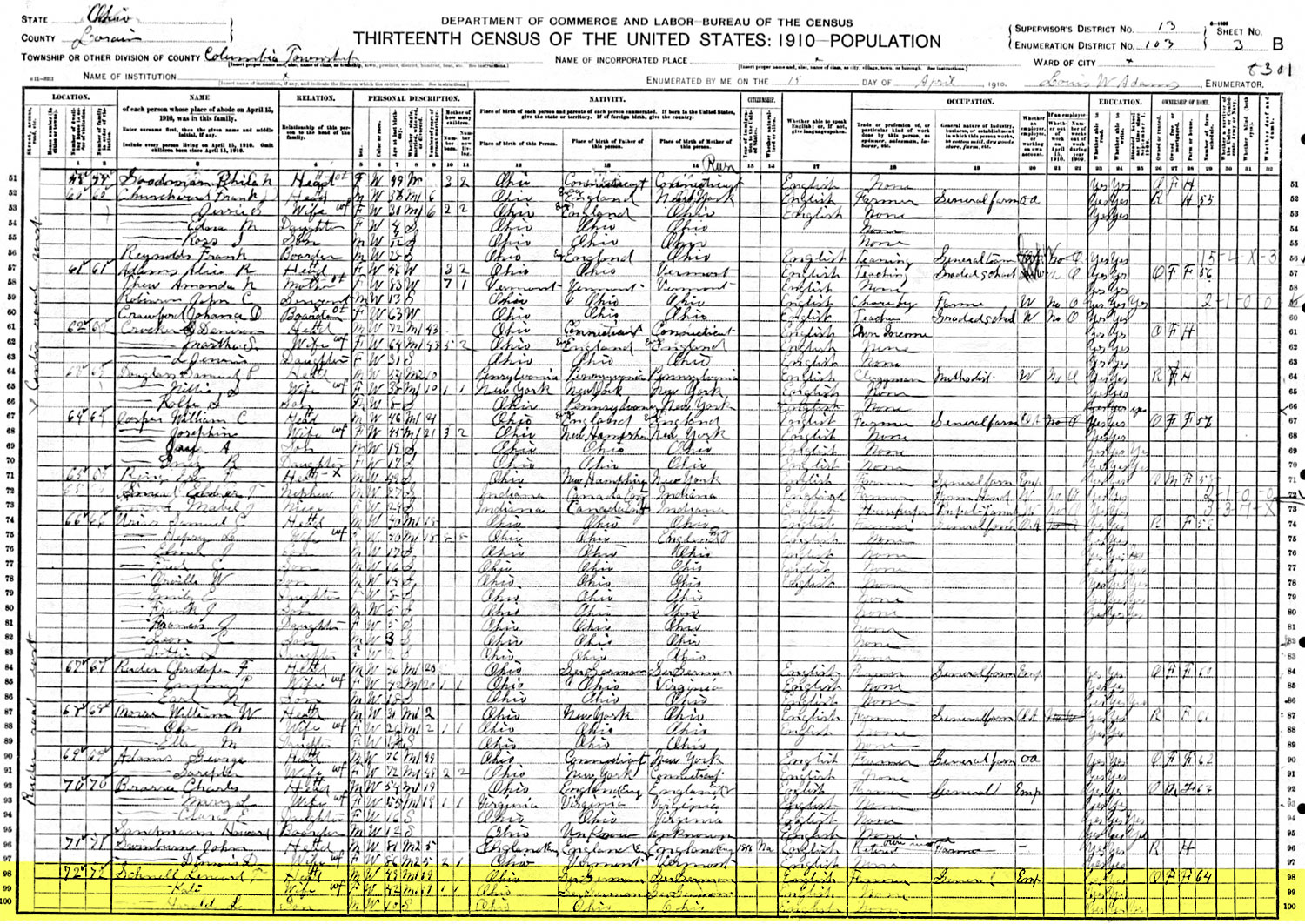 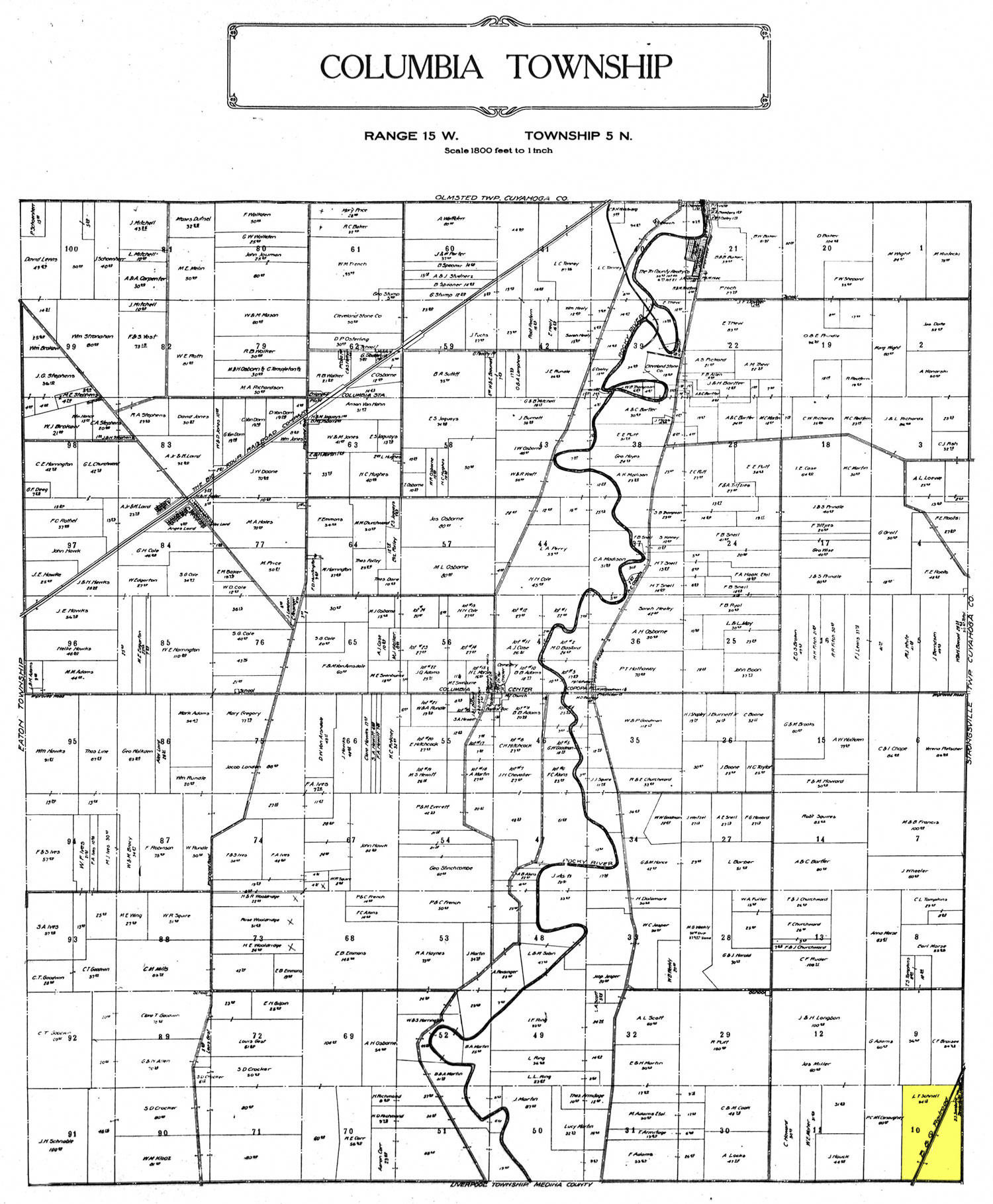 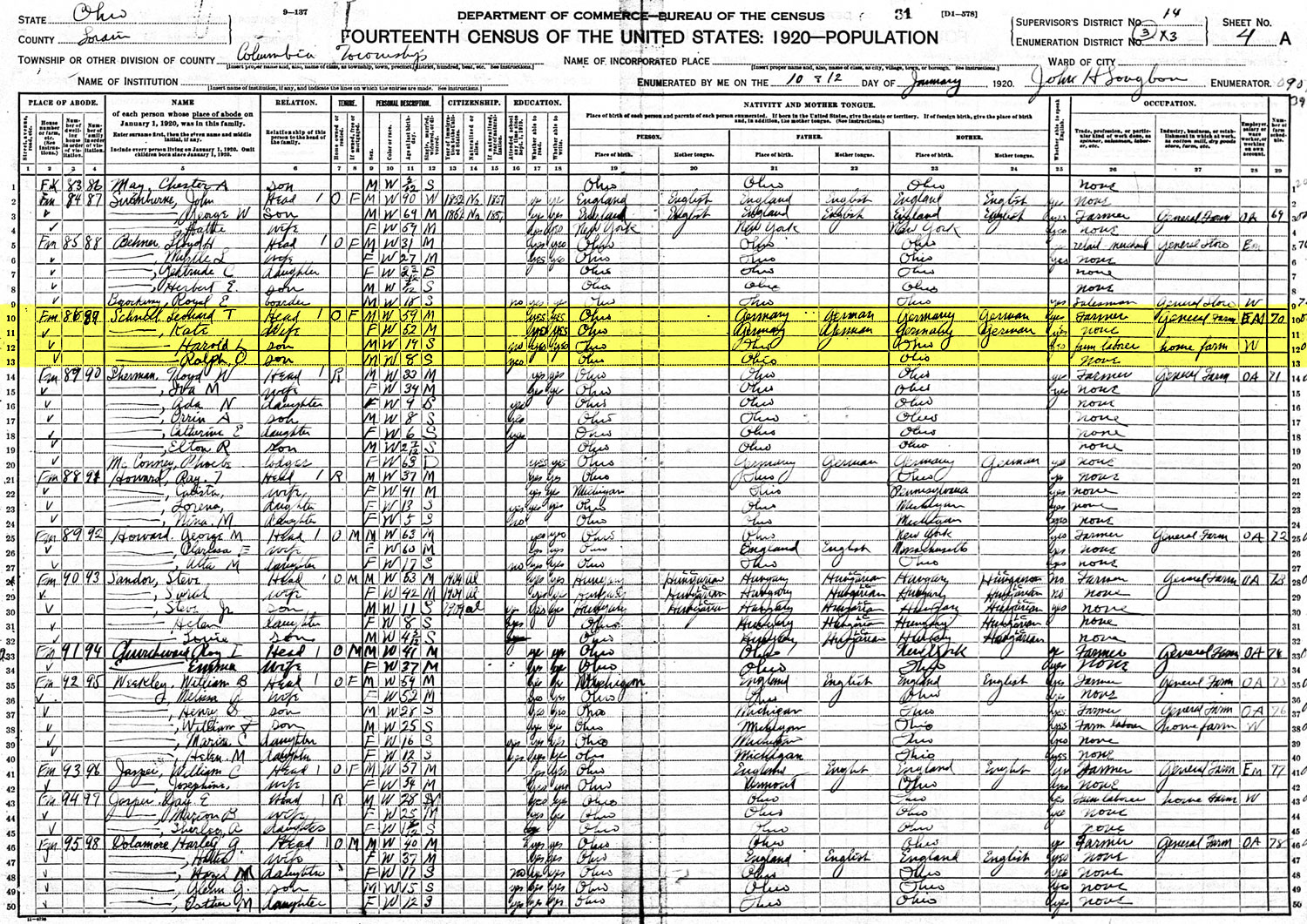 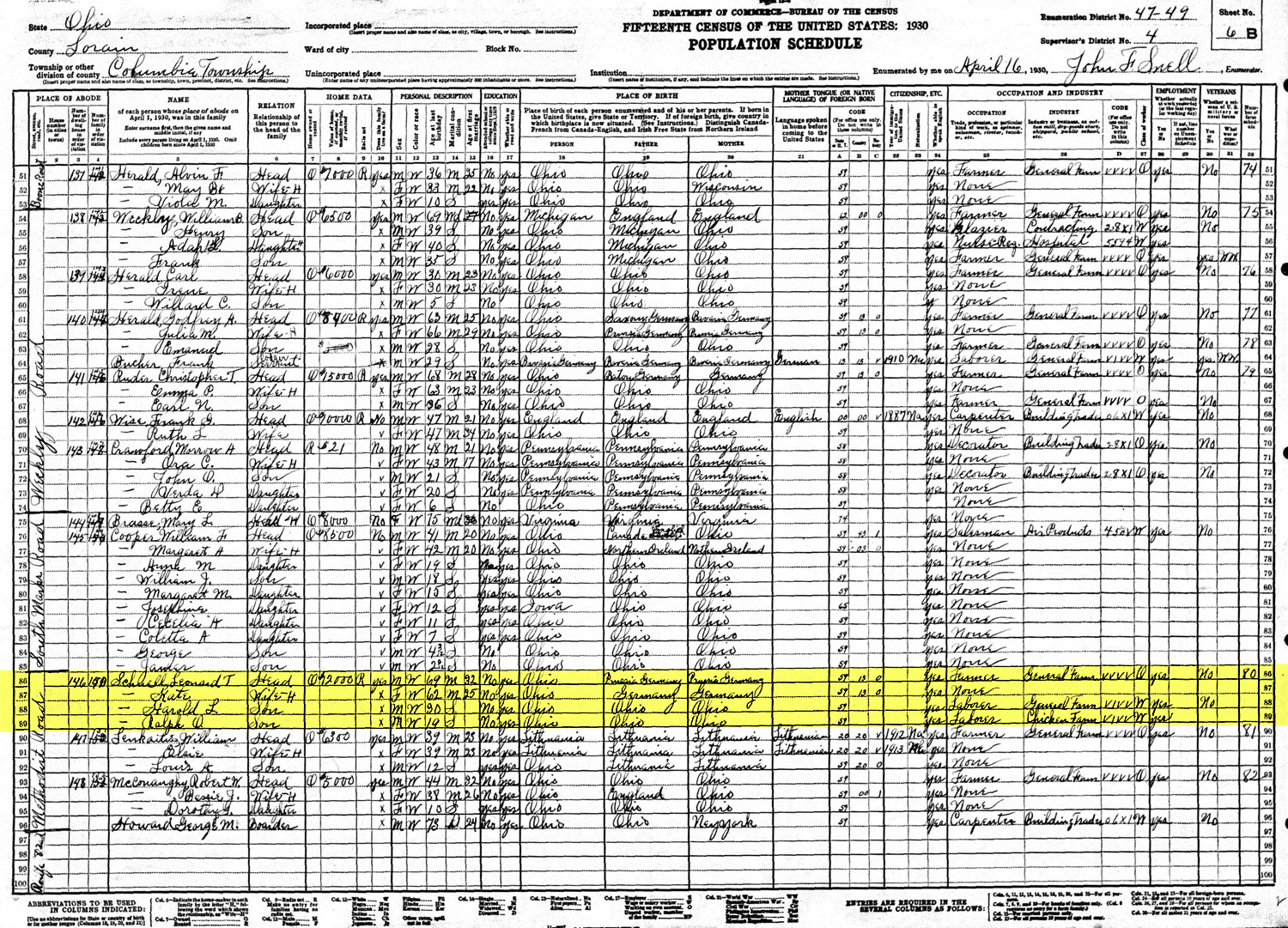 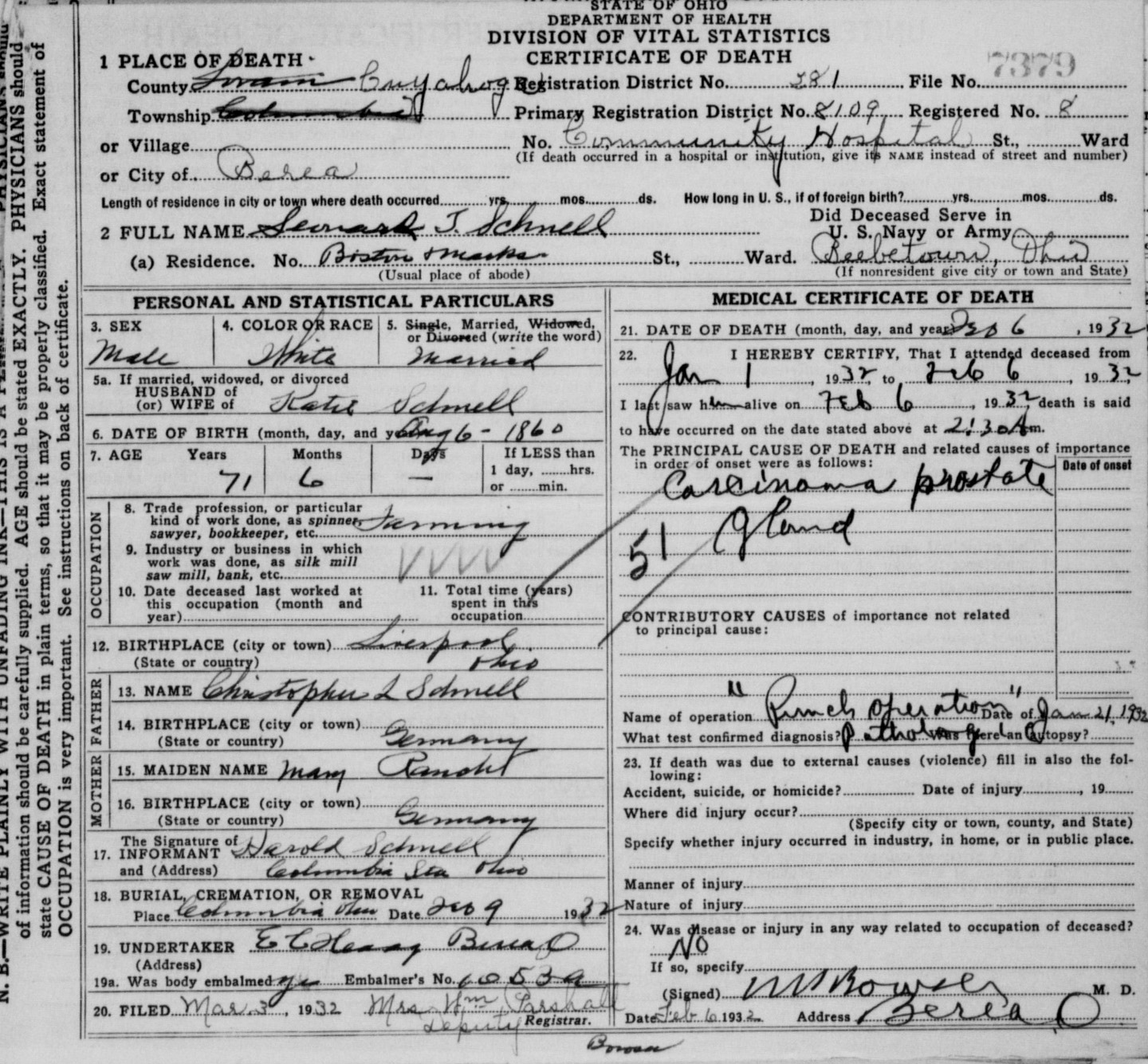 * We do not know for a fact that Leonard's middle name was Tobias. I have not been able to find evidence that this is without a doubt the truth, but all signs point to this being the case, including his grandfather's name being Tobias.

A It should be noted that the family farm in Beebetown was rural enough of a residence that it was never documented under an actual address during Leonard and Kate's lifetime. Marks and Boston roads are not even mentioned by their names until Leonard's death in 1932. 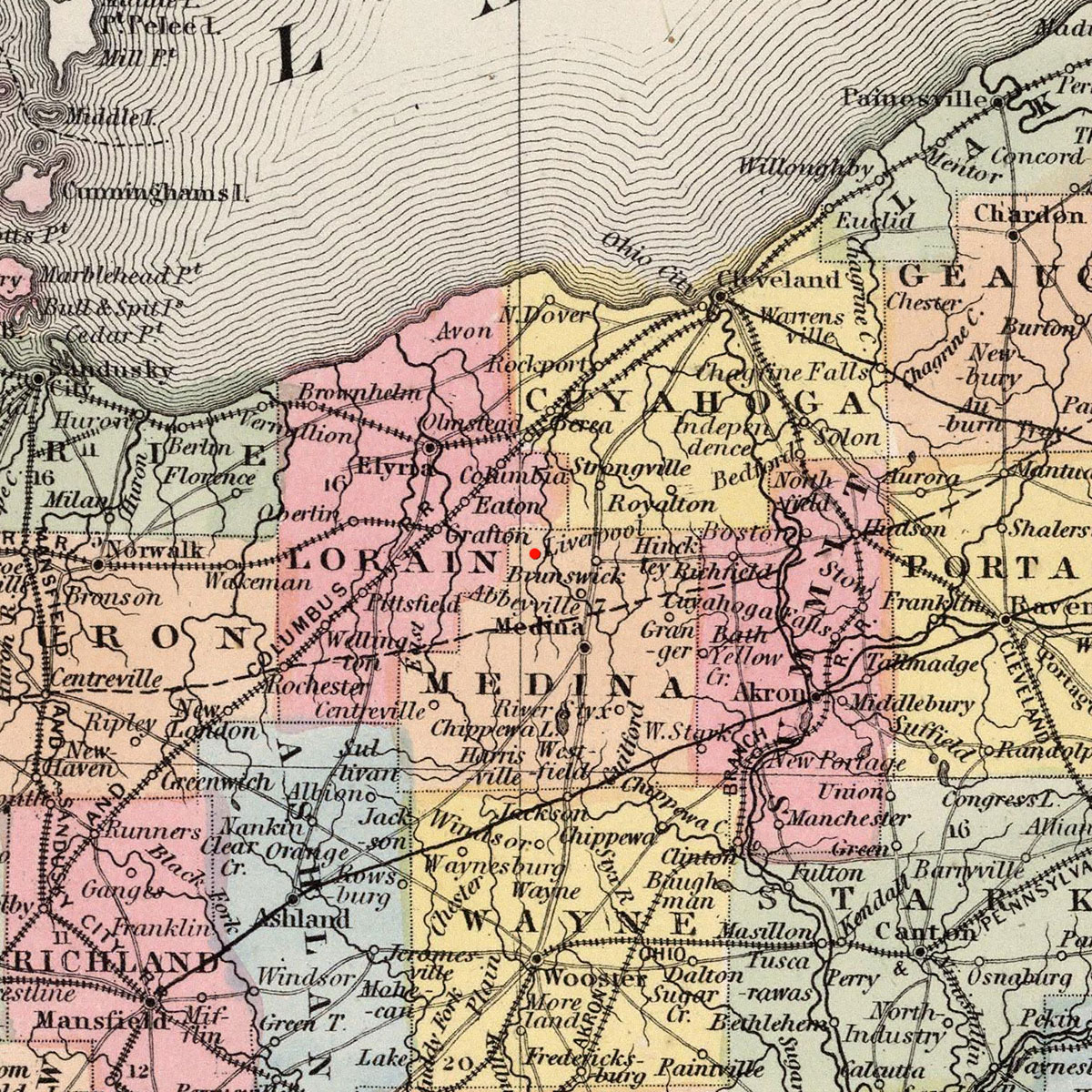 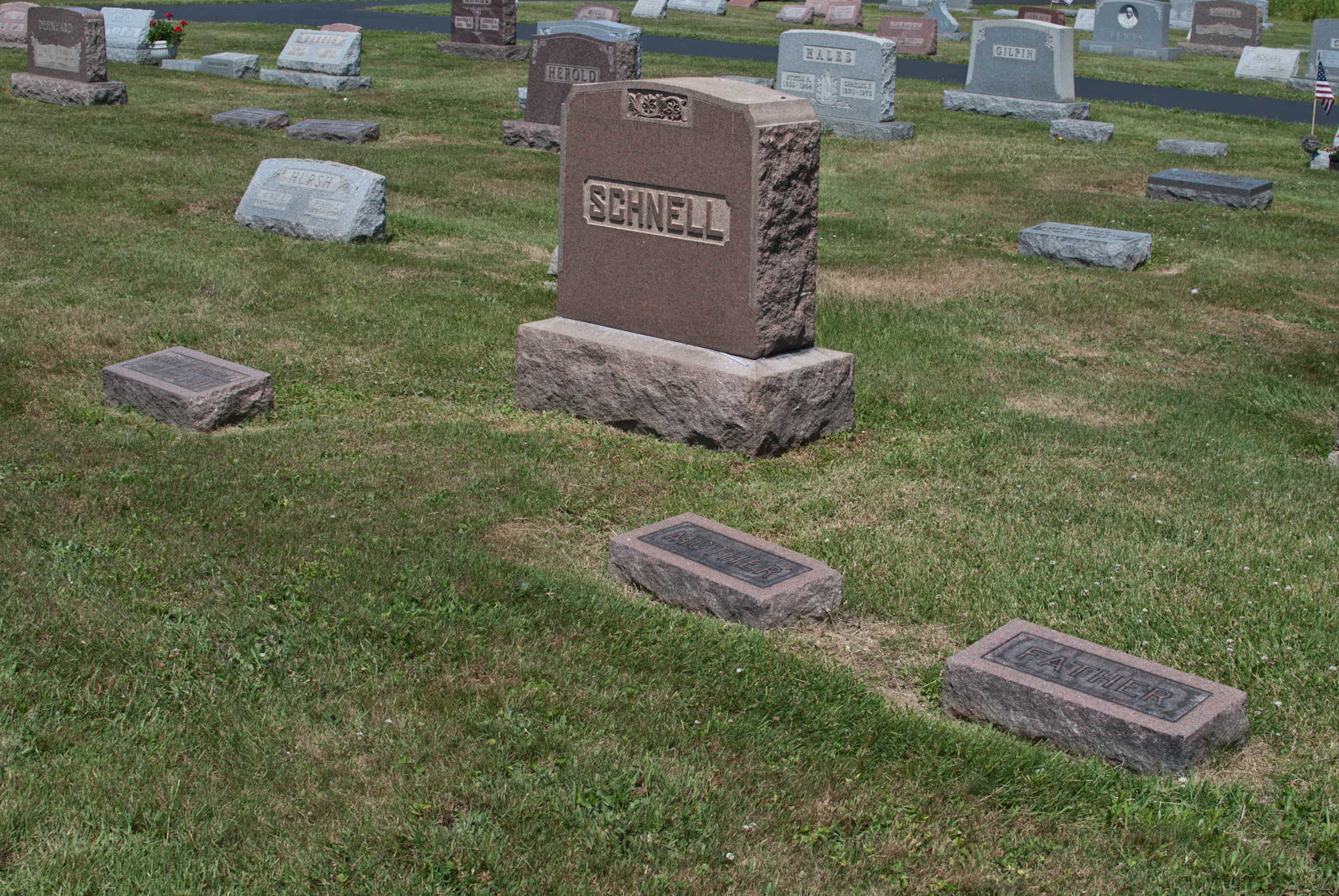 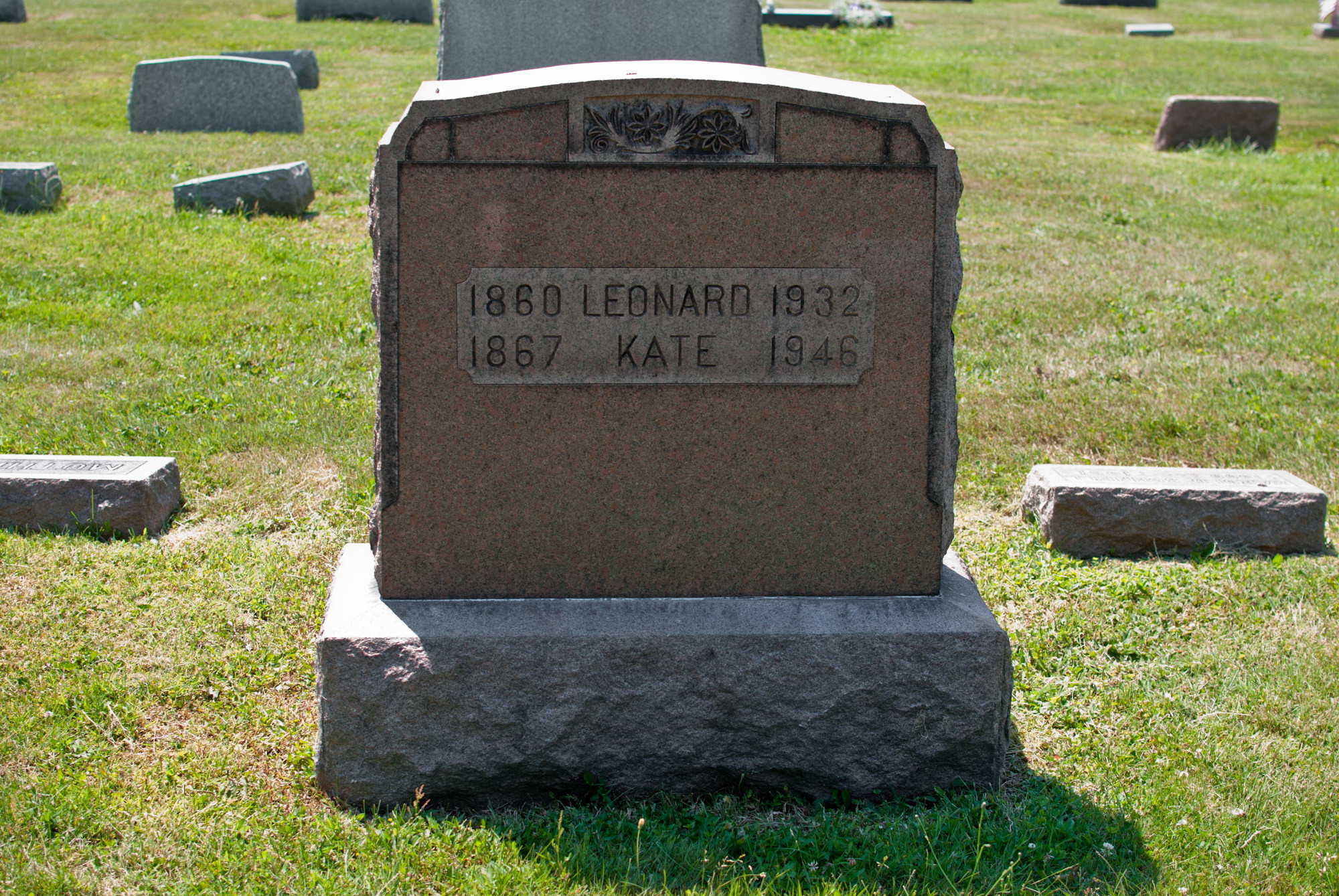