John Collier was born in Stowe-by-Chartley, Staffordshire, England shortly before the 22 Dec 1803 to parents John Collier and Jane Stanley. John was baptized at St. John the Baptist Church on 22 Dec 1803.

Very little is known about John's childhood. We know he was the eldest of his parents' 7 children, all sons. George 1805, James '06, Richard '07, Charles '09, Richard '10 and William '11. Of John's siblings, we know that both brothers Richard and William died in infancy. We can't even be certain that there weren't more children in the family but, if so, for some reason they went undocumented.

(St. Mary's Church in Bushbury is just north of Wolverhampton and a total of 20 miles south of John's parents in Stowe-by-Chartley. It's 15 miles south of life in Stafford where the family could be found 2 years later and an almost absurd 27 miles south of Catherine's parents in Fulford. Why the couple would travel seemingly so far out of their way, away from any previous or future life to get married in Bushbury at this time is a mystery. This was not common for the time.)

Shortly after marriage, the new couple moved to Stafford, Staffordshire, England where in 1823 John is first mentioned as the proprietor (usually written as victor or publican) of a tavern and public house at 80 Eastgate Street known as The Goat Inn. He did not own the building, only the pub & inn that operated in the building.

In the spring of 1835, John would lose his wife Catherine to reasons currently unknown. She was buried on 13 April 1835 in Fulford, Staffordshire where her parents lived and where she was baptized. (THEORY: Burial in Fulford could hint that she was not well and/or pregnant and spending time with her mother/midwife outside of the more congested city life of Stafford. Also, a total of 2 kids with no known children after she turned 30 was well under the norm for the time and could further the possibility of problems carrying a child to full term.)

Without a wife, John was left to run the Goat Inn alone with his 9 and 7 year old sons. I'm certain this left a large need for a mother in the home and John did not dwell long before finding himself a new wife.

In 1837, John's father, John Sr., dies in Stowe-by-Chartley. In his will, the father leaves son John his business, The Cock Inn in Stowe. It's at this time that John would sell the Goat Inn to his brother Charles Collier and his wife Jane (who in turn would go on to purchase the building from the original owner, taking full ownership of the Goat Inn).

John would operate the Cock Inn out of the 15th century residence on Station Road for the next 10 years until his premature death in 1847 at the age of 43 years old. While we don't know much about John's passing, we do know he was buried on 12 May 1847 and that he knew the end was likely near as he wrote and signed his will on the 8th of May, four days before his burial. (THEORY: John died only weeks after his younger brother James died in Amerton, on 26 April, which could hint at some form of contagious disease or illness.**)

NOTE: It should be mentioned that all known children of John + wives were baptized in Stowe-by-Chartley. This includes the 3 known children born between the years 1825-1837 while John & family lived in Stafford at the Goat Inn. 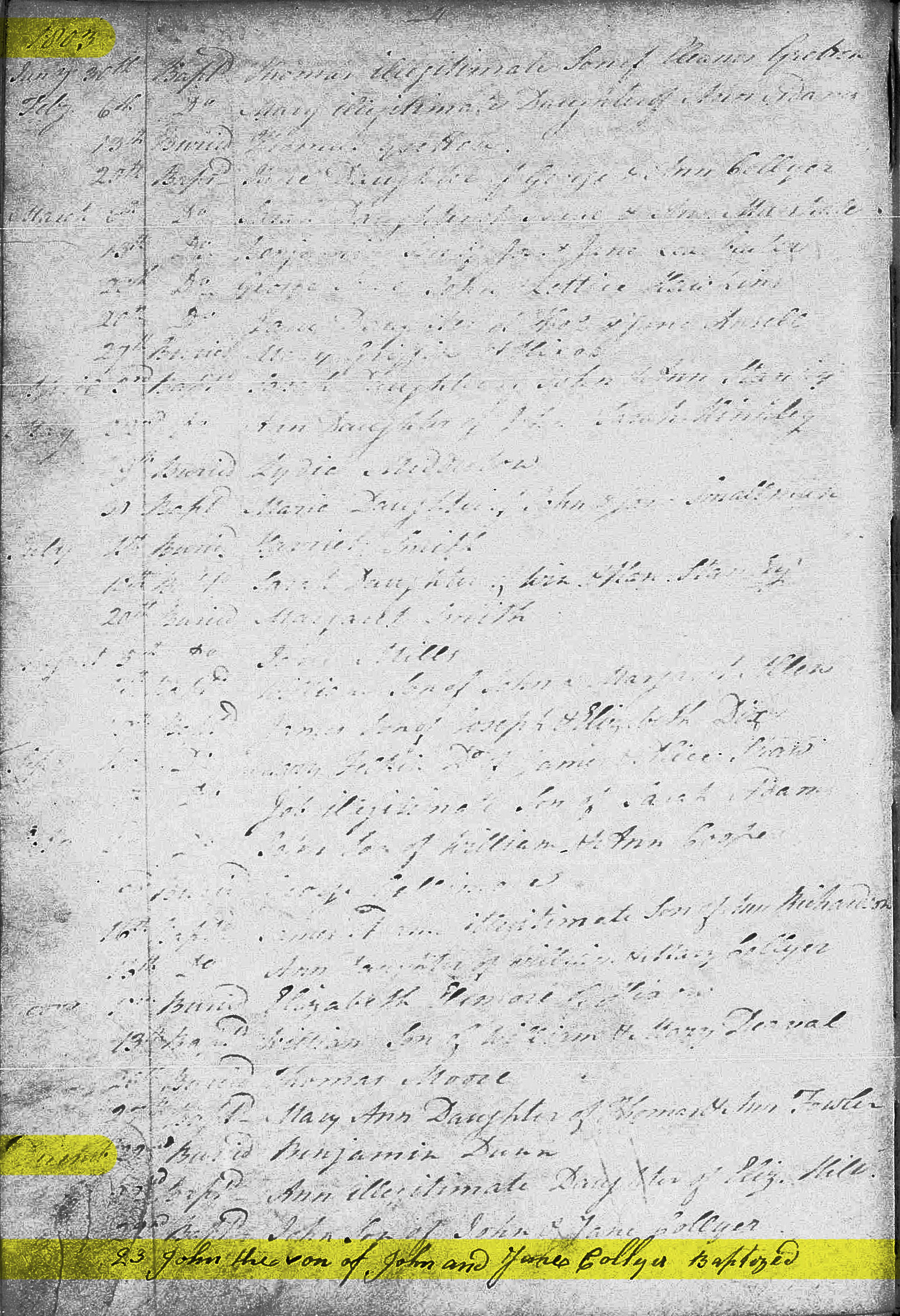 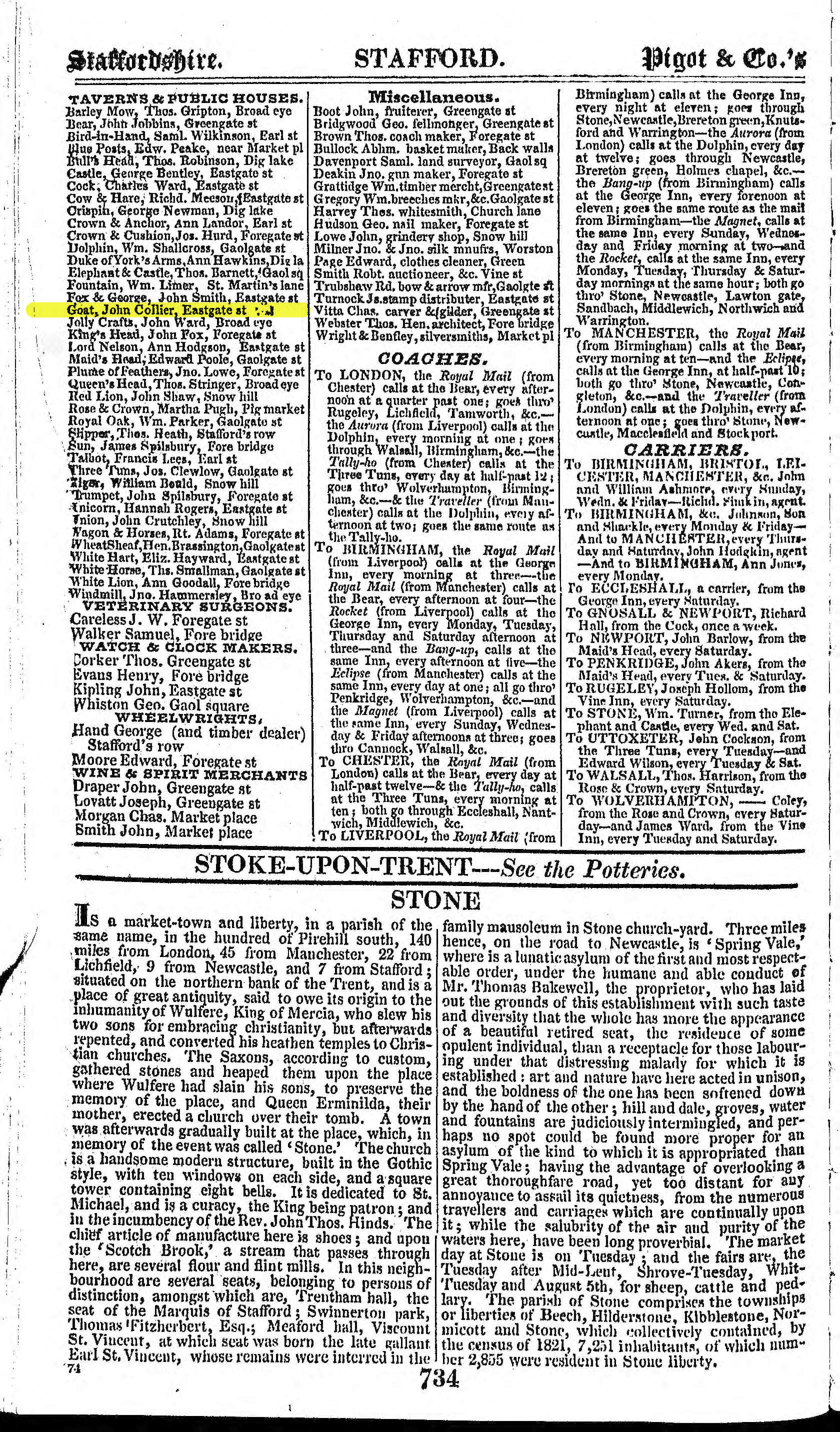 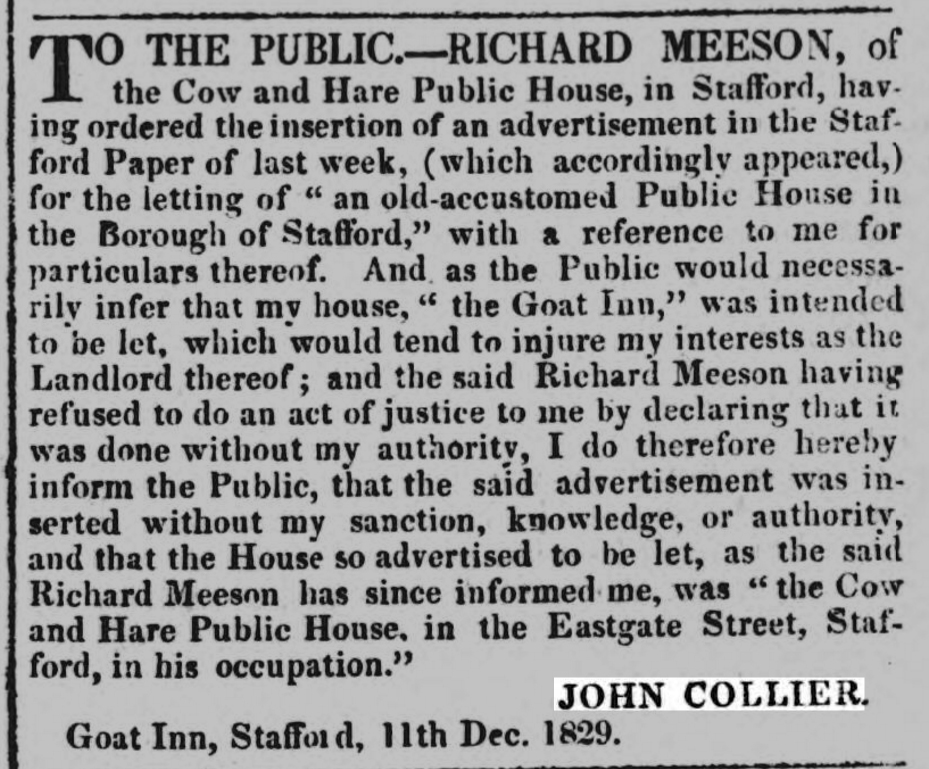 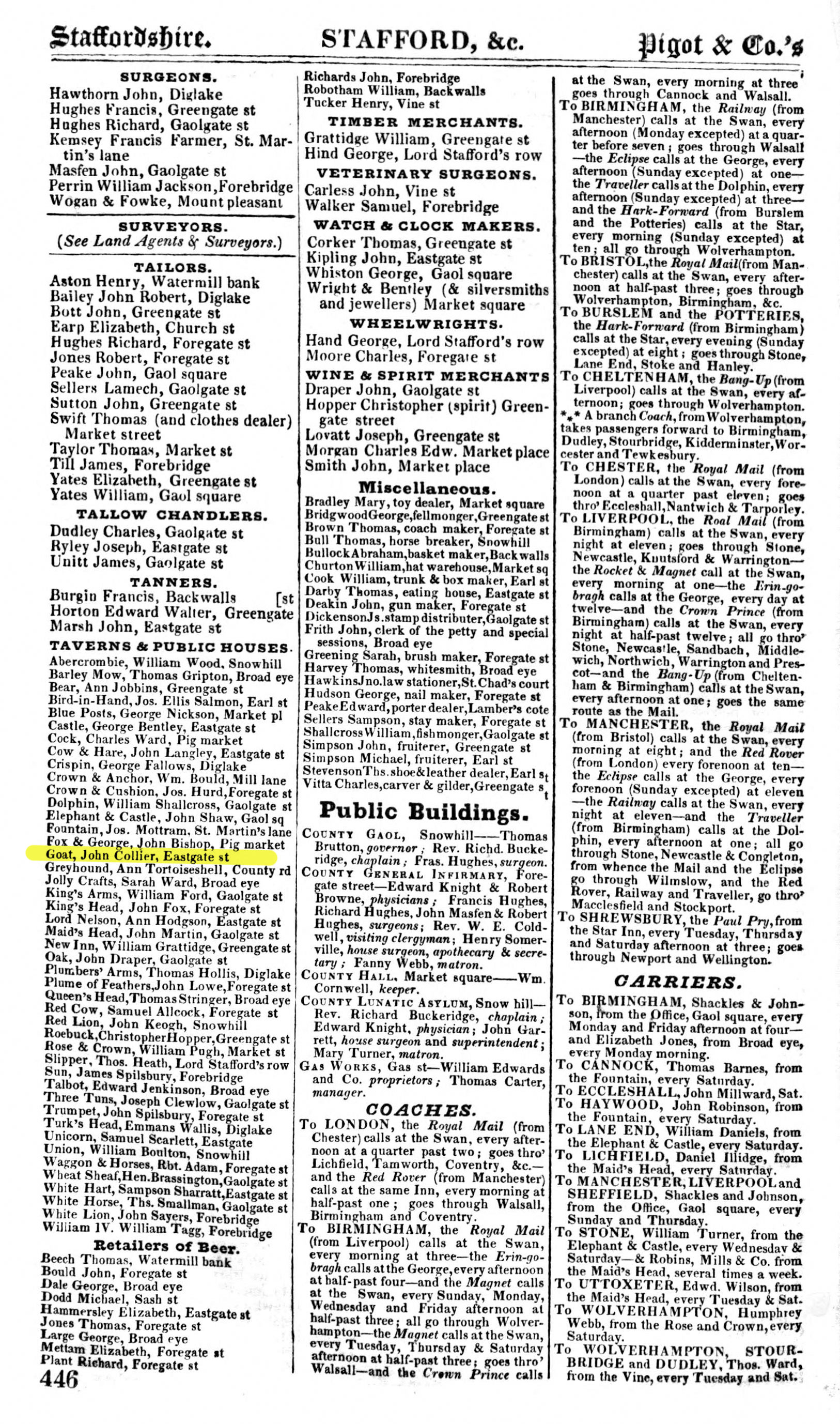 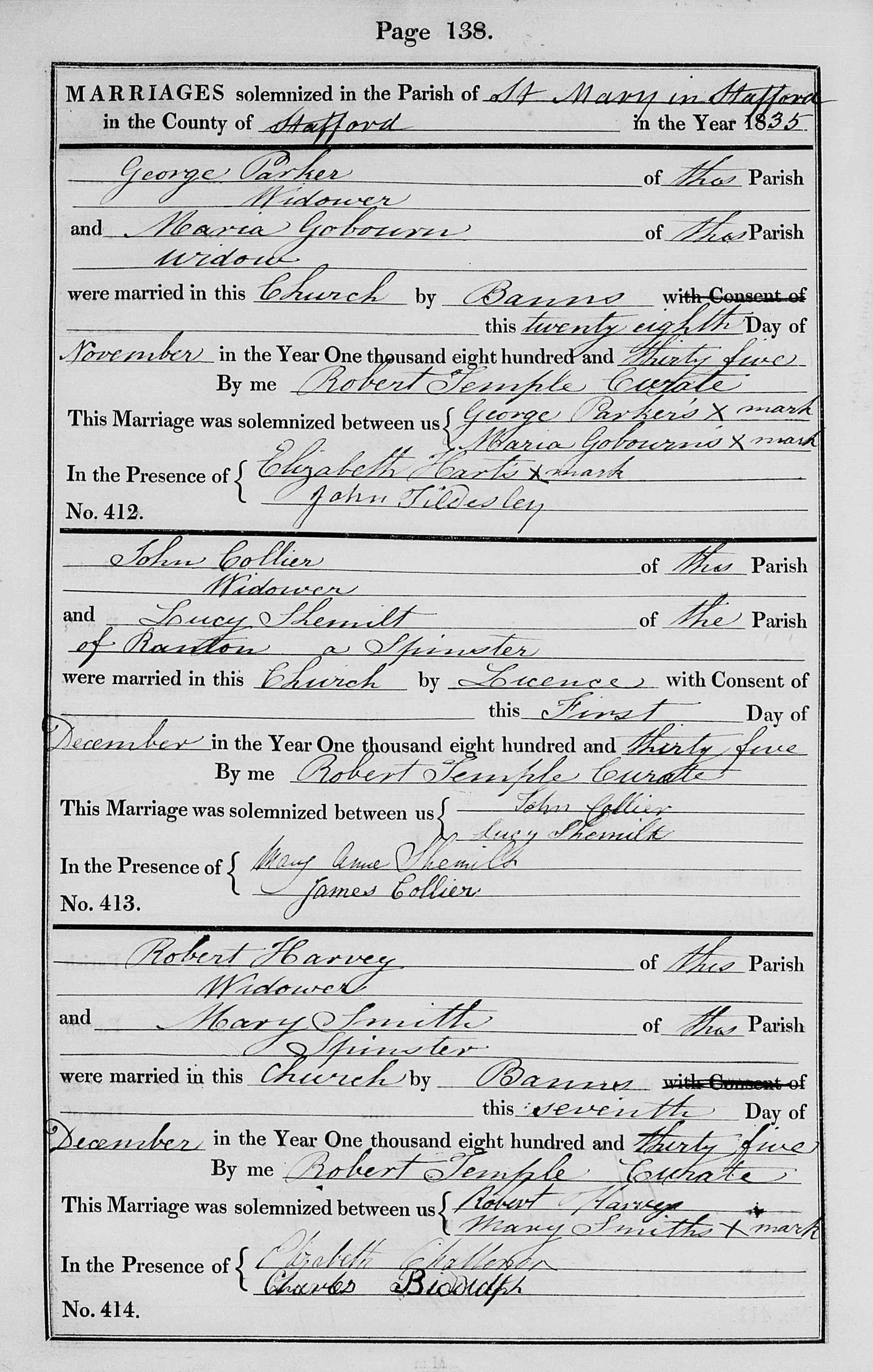 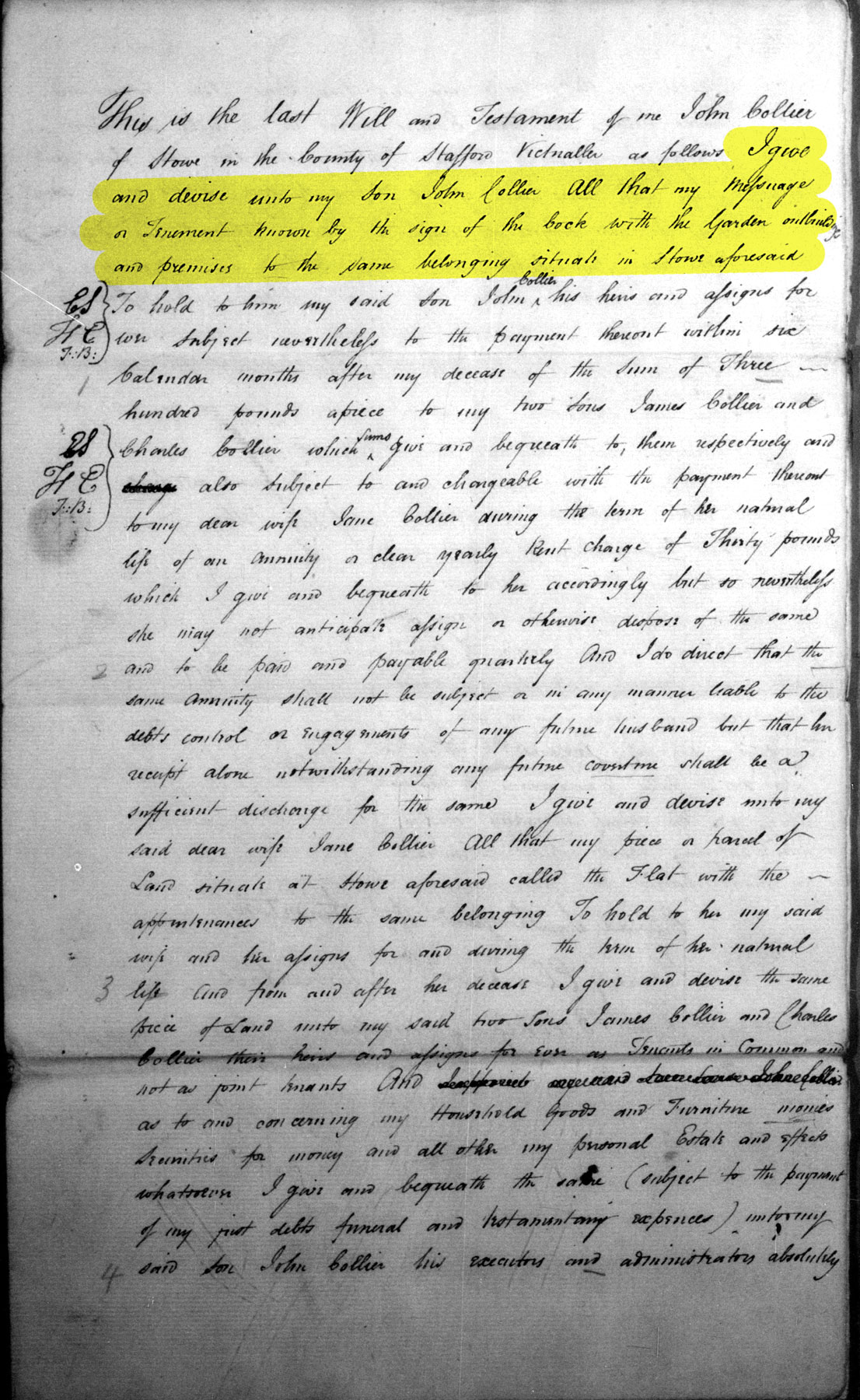 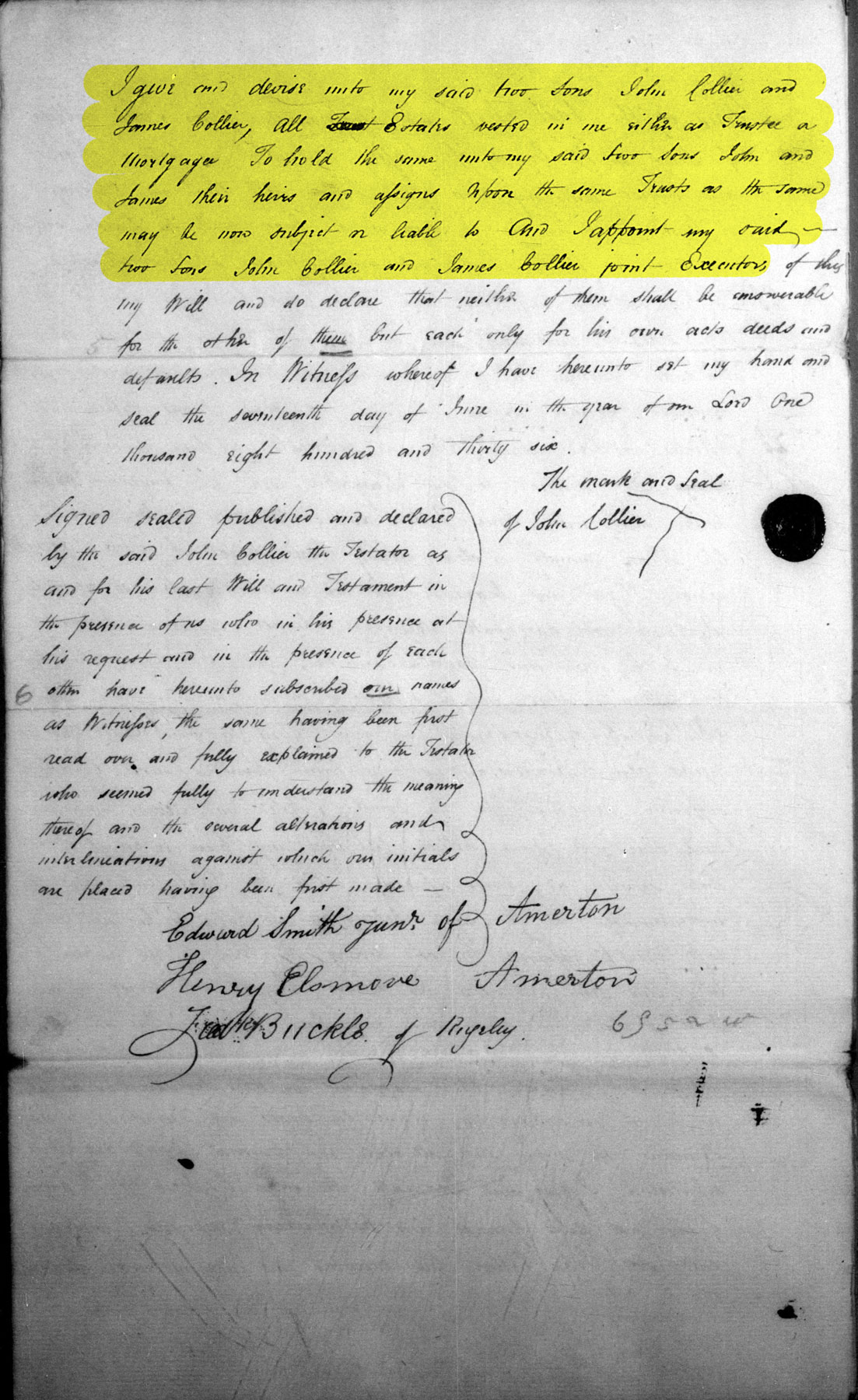 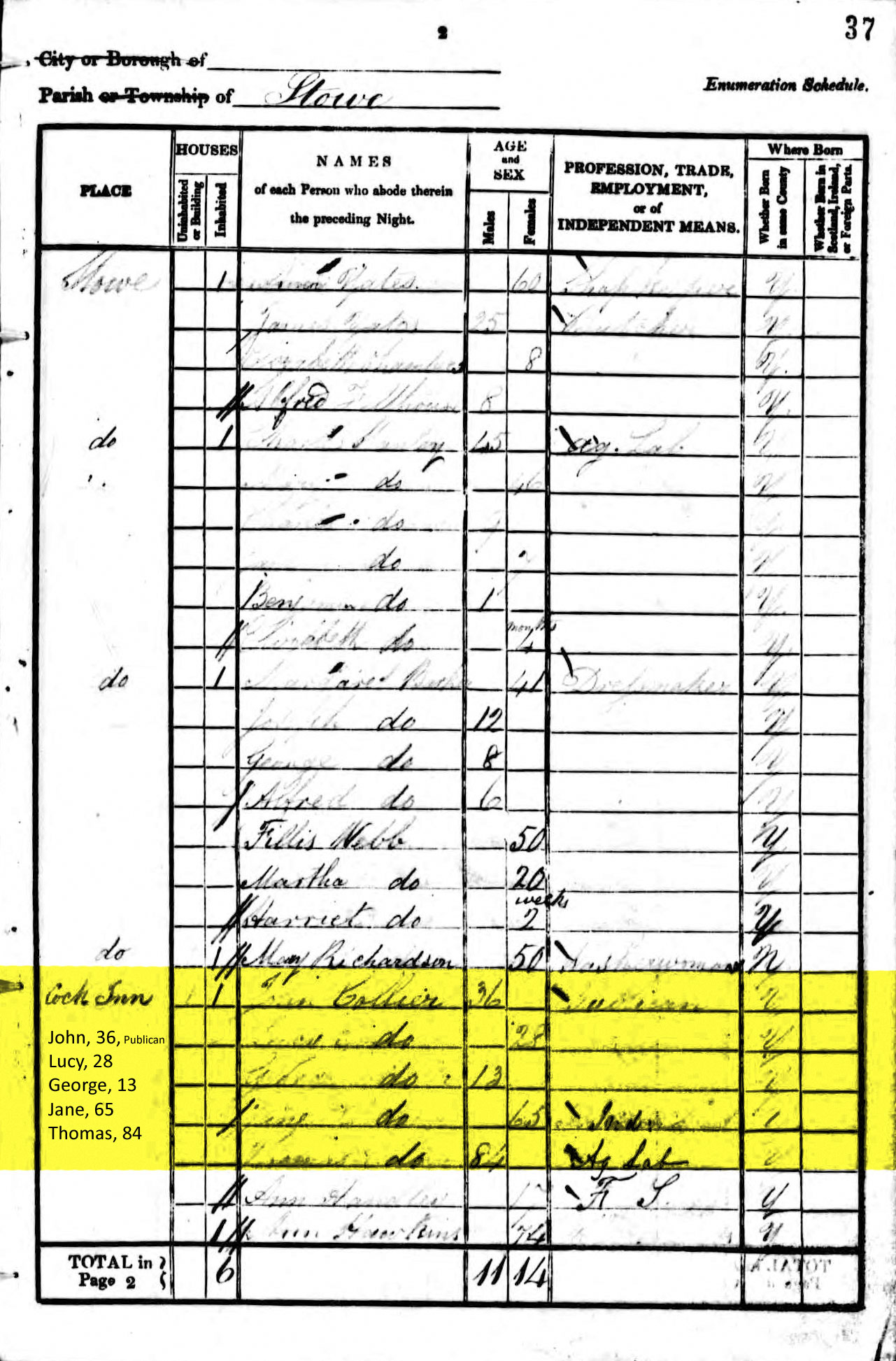 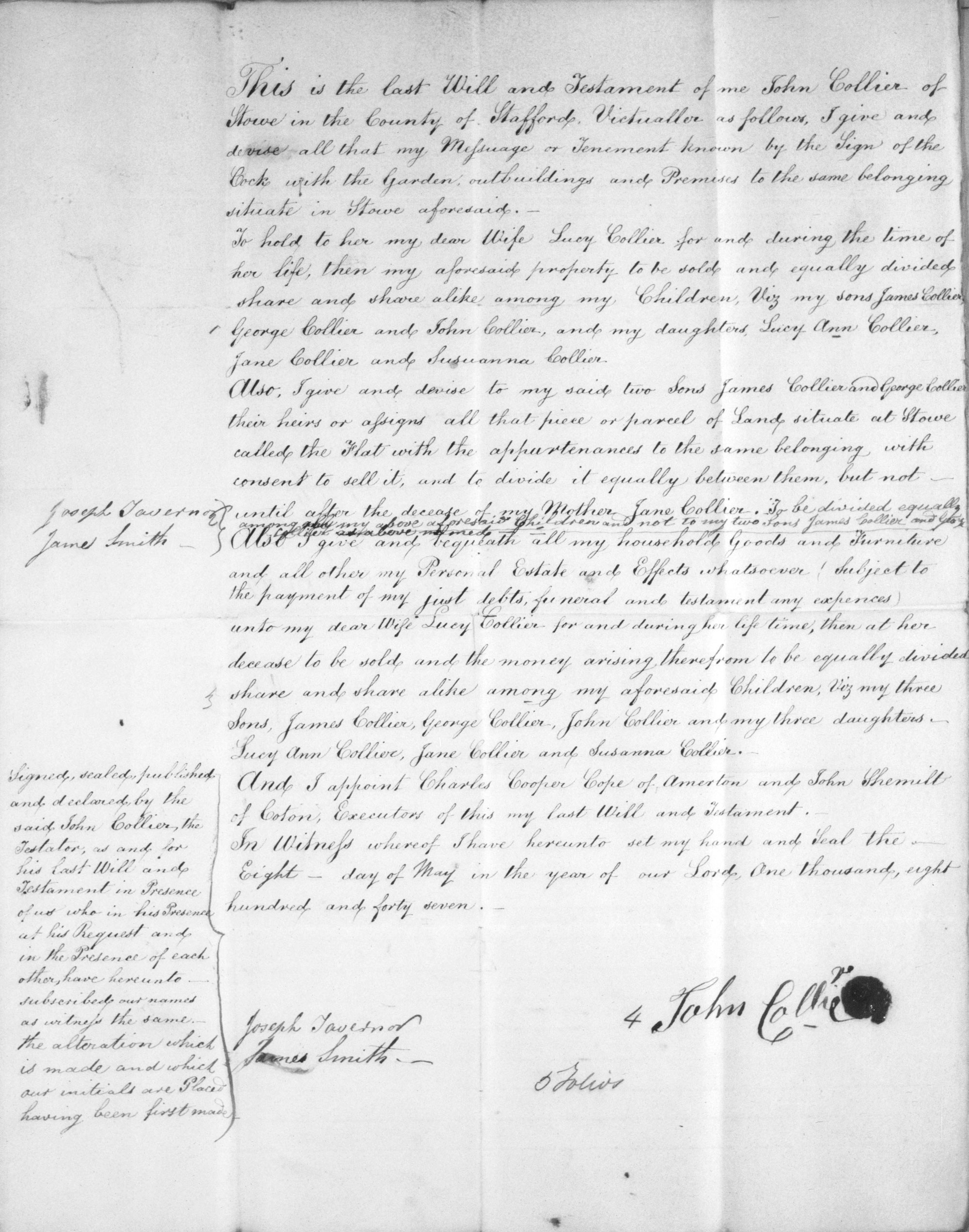 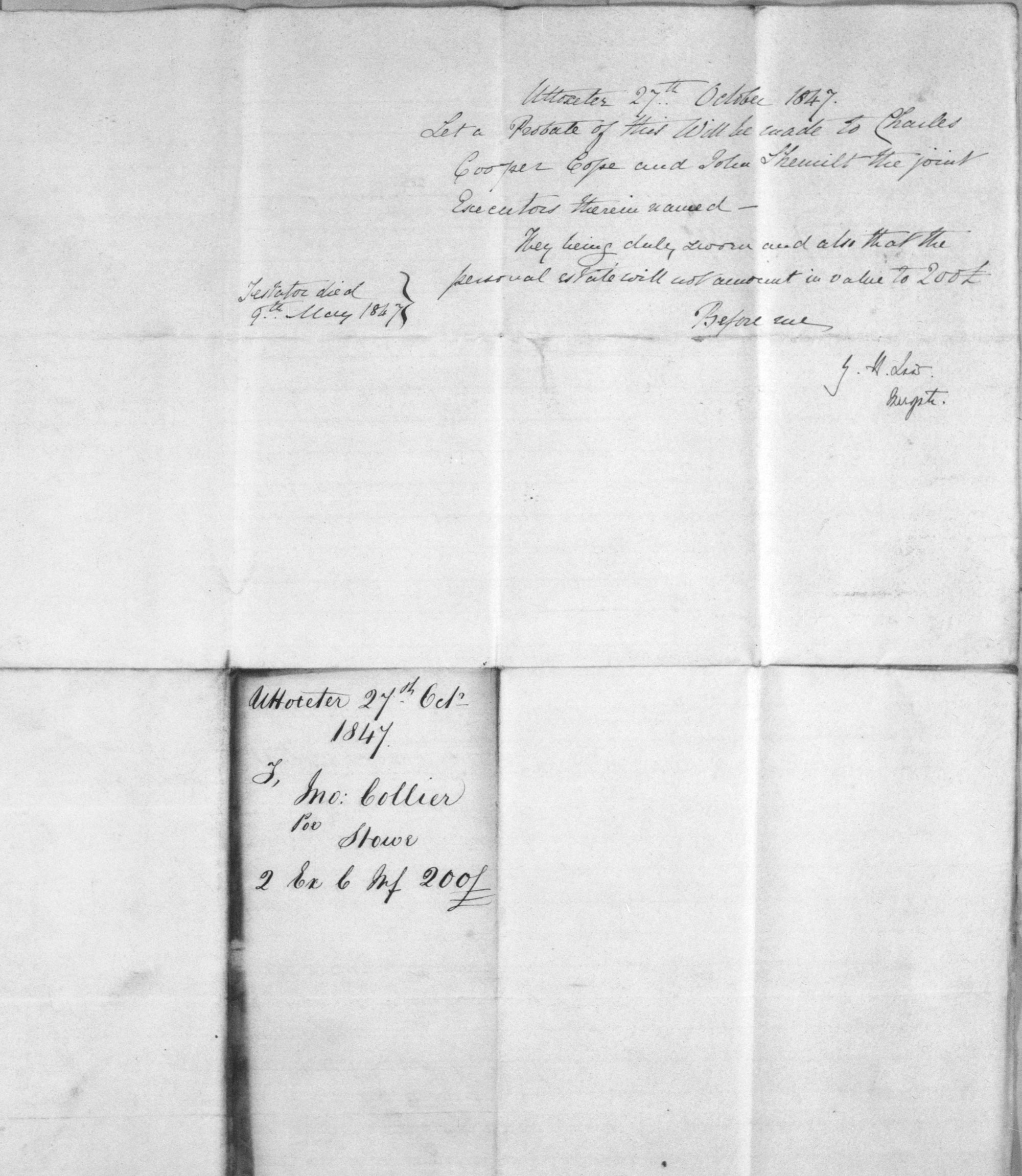 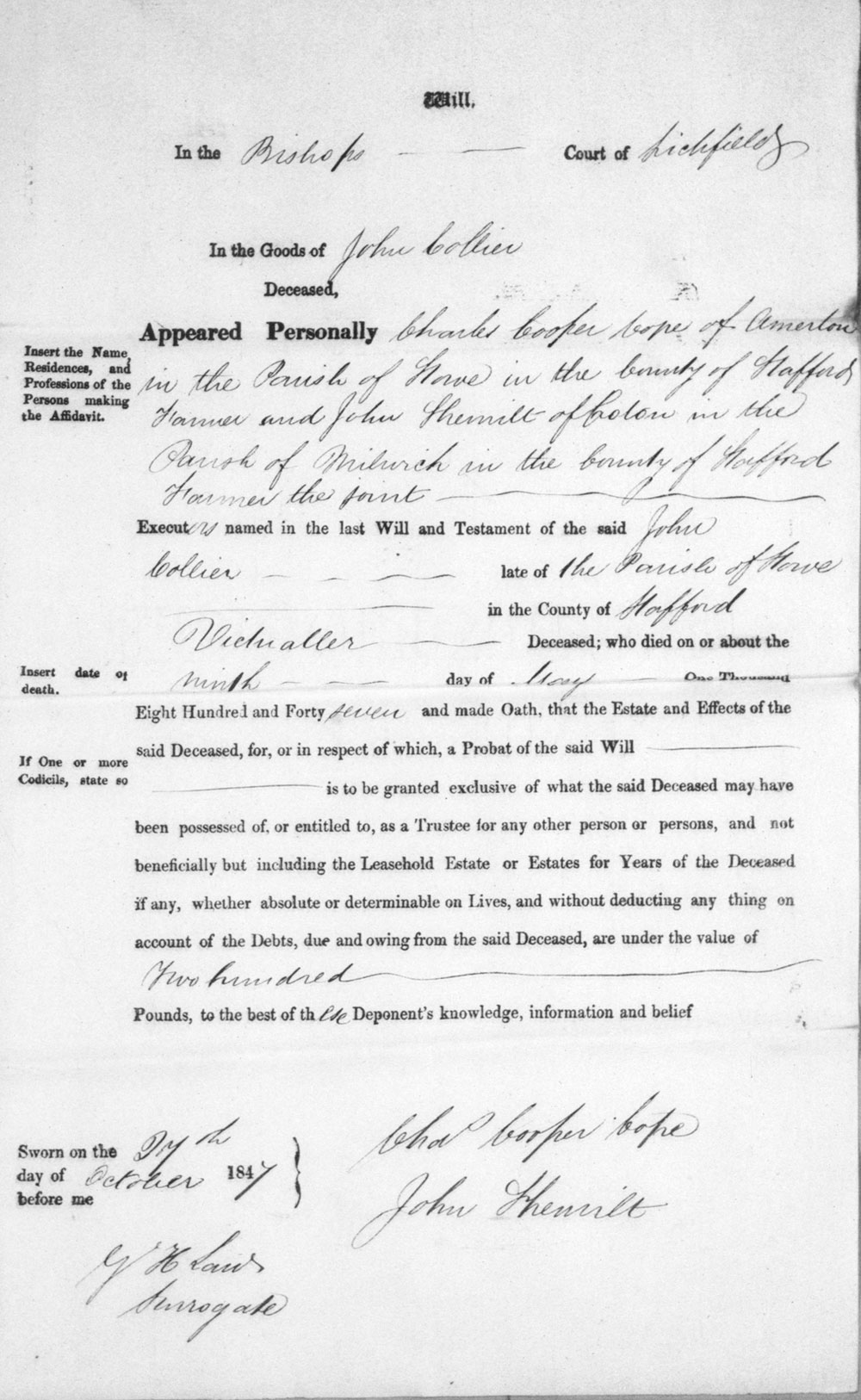 *Based on the popularity of the name William Collier and the inaccuracies in record keeping, we have been unable to locate any William Colliers that made it to adulthood that fit the description.

** England and Wales in 1847 saw a severe outbreak of typhus accounting for over 30,000 deaths as well as a severe influenza epidemic which took 13,000 lives. Also, taken together, measles and "hooping cough" accounted for fifty thousand deaths in England and Wales between 1838 and 1840. (Info taken from "The Healthy Body and Victorian Culture" by Bruce Haley)

*** The book "Inns and Alehouses of Stafford: Through the South Gate - Part 1 of 2" by John Connor (2013) states that John Collier was the Licensee/Occupier of the Goat Inn from 1823-1837 before "moving next door". This is incorrect. While the timeline is accurate, John's occupation of the Goat Inn ended when he was willed his father's tavern & public house, the Cock Inn, in Stowe. He proceeded to sell the Goat Inn to brother Charles & relocated back to his childhood home in Stowe, not next door. 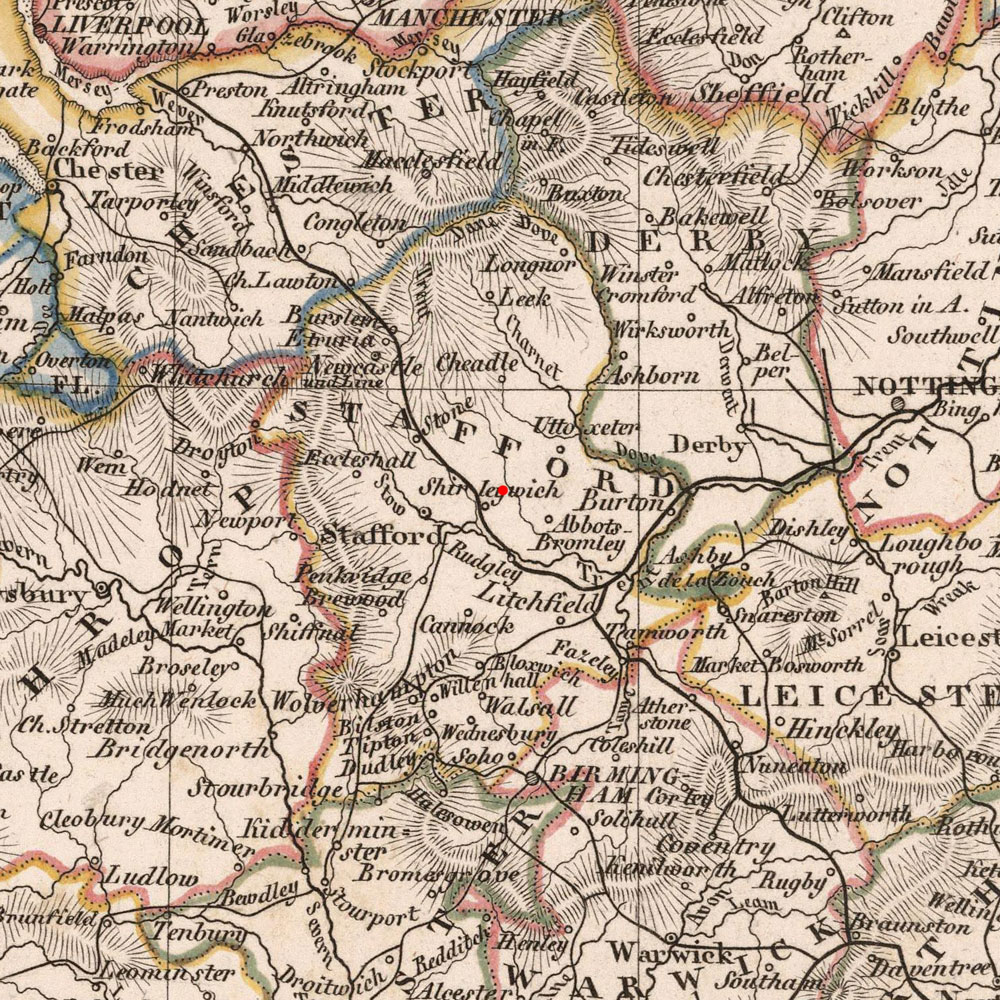