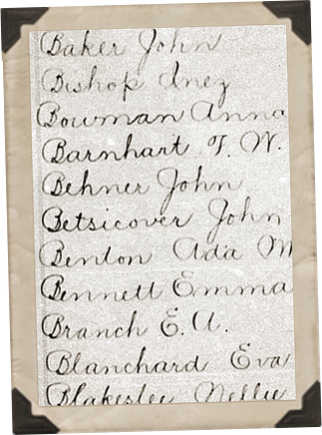 John is currently assumed to have been born in Sigmaringen, Baden-Württemberg, Germany in 1824 under the name Justus Betzikofer.

While research is still underway, this is all we know of John's early life at this current moment.

Even less is known on his wife Emily Zimmerman. She was born in the region of Bayern, Germany about 1828 and seems that her birth name was Apolonia even though she frequently went by Emily and Emma.

That is the total extent of our early knowledge. As a matter of fact, we don't know much about their arrival in America either. John stated later in life on his naturalization paperwork that he arrived May of 1852, but we don't know where or if he was alone or with his brothers Gregor and Augustus.

We also don't know when he was married.

Currently his oldest known son, John, stated he was born in Ohio in 1854. Other children state they were born in the Liverpool Township/Valley City area (including Emma and Mary in '56 & '58), but no records of the family's residence appears in Liverpool until the 1870 census, and no record of John in the county until his naturalization in Oct 1865.

When the family is finally listed on the federal census. The family can be found 04 Jun 1870 in Liverpool Township, Medina County, Ohio where John, wife Emily, and children Henry, Emily, Mary, Barbara, Joseph, George, Cathrina, and Saphronia are living. Oldest son John has seemed to already move out of the house.

Daughter Saphronia dies in 1871, followed by Sons George in 1872, and Henry in 1875. At this current time we no nothing about the situations that led to these children's untimely demises.

Daughter Emma married in 1873 and left the house, followed by Mary Ellen in 1875.

The rest of the family kept their roots in Liverpool Township where they're counted on the 1880 census. This time, John is working as a farmhand (not a farm owner himself) and his son Joseph, now 18, is living next door where he works as hired help.

Daughter Barbara married away and left the family home in 1887.

Wife Apolonia died on the 23 Oct 1889 at 61 years old. The cause of her death was not documented in county records and not noted in the newspaper.

John died on the 13 Apr 1899 of paralysis at the age of 75. It appears the family residence was on the east end of Vally City in Belden as the papers note his residence as Grafton Township. (Somewhere around 1818 Beldon was switched from Liverpool Township to Grafton Township and referencing it under both locations persisted for quite a while).

Both John and Emma were buried at the Betsicover family plot in Myrtle Hill Cemetery (sometimes referred to as Hardscrabble Cemetery). The family plot is on the south side of Myrtle Hill rd., East of Columbia Rd., in the Old Section on hill near the road on West end.

There is no telltale sign as to when or where the family chose to adopt in changing their name from Betzikofer to Betsicover, but what I do know is that from research, this evolution is exclusive to John and his children. His brothers never changed from Betzikofer. John himself is seen using Betsicover on his naturalization paperwork, yet almost 30 years later a version of Betzicofer is used delivering notice of Emma's passing. 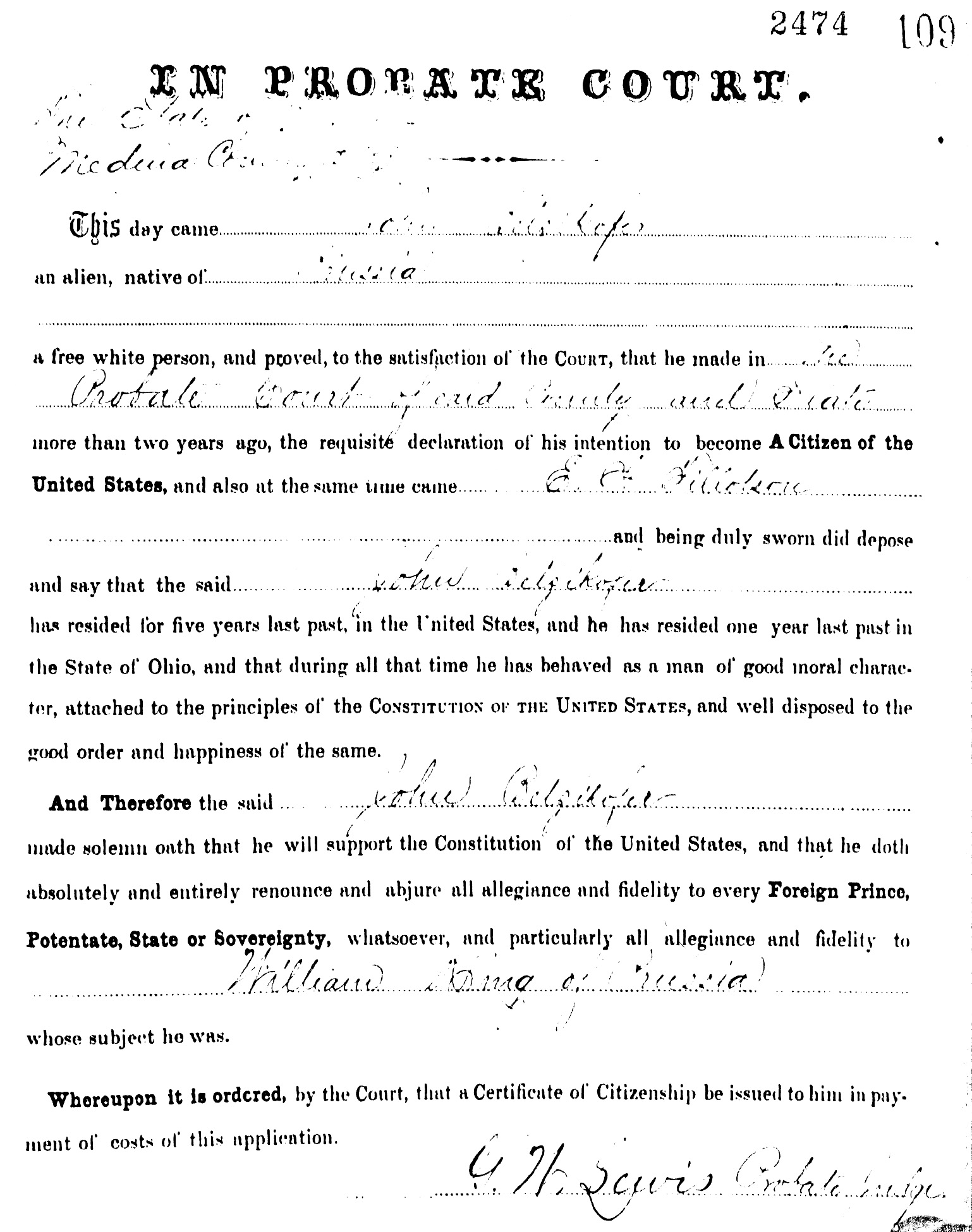 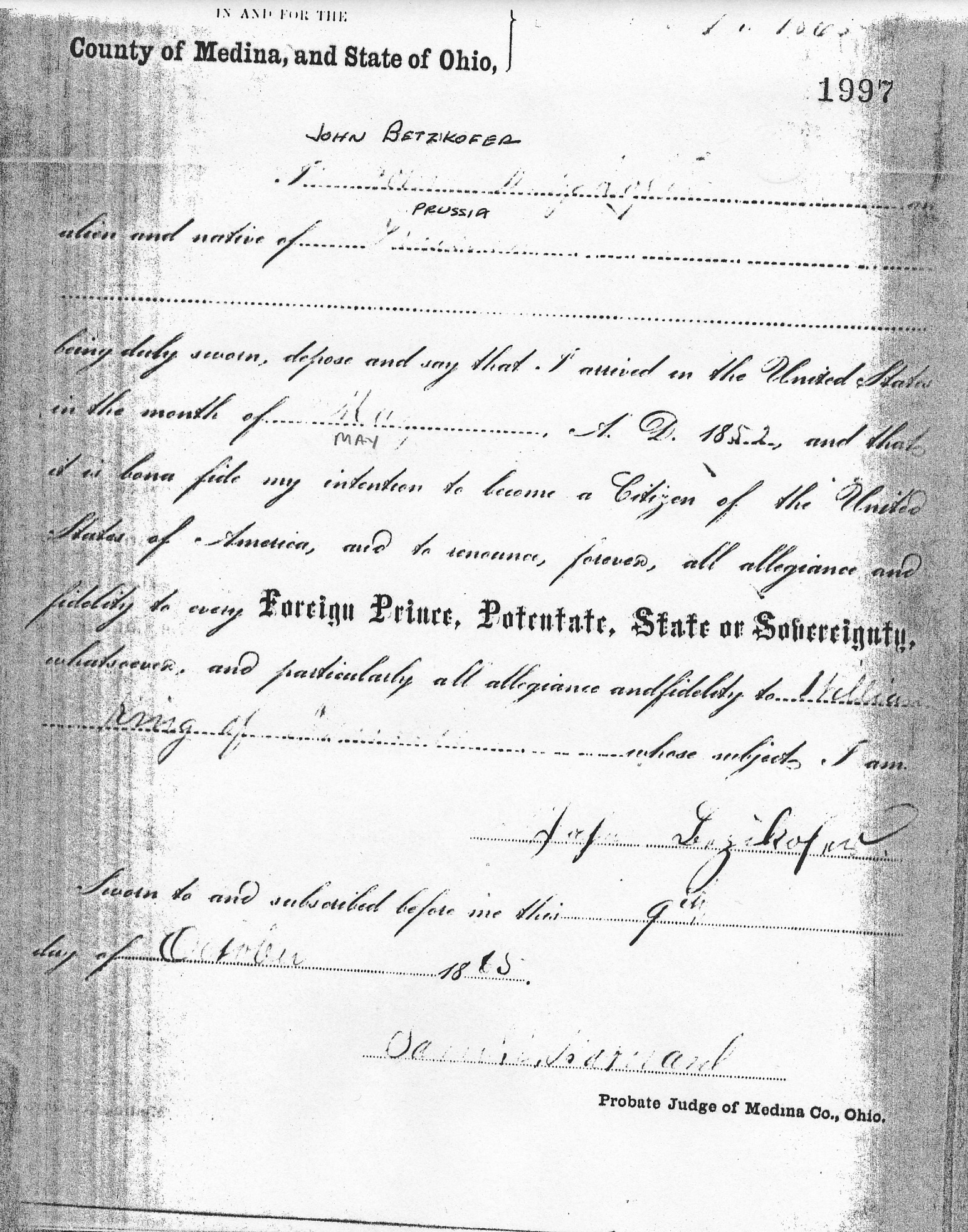 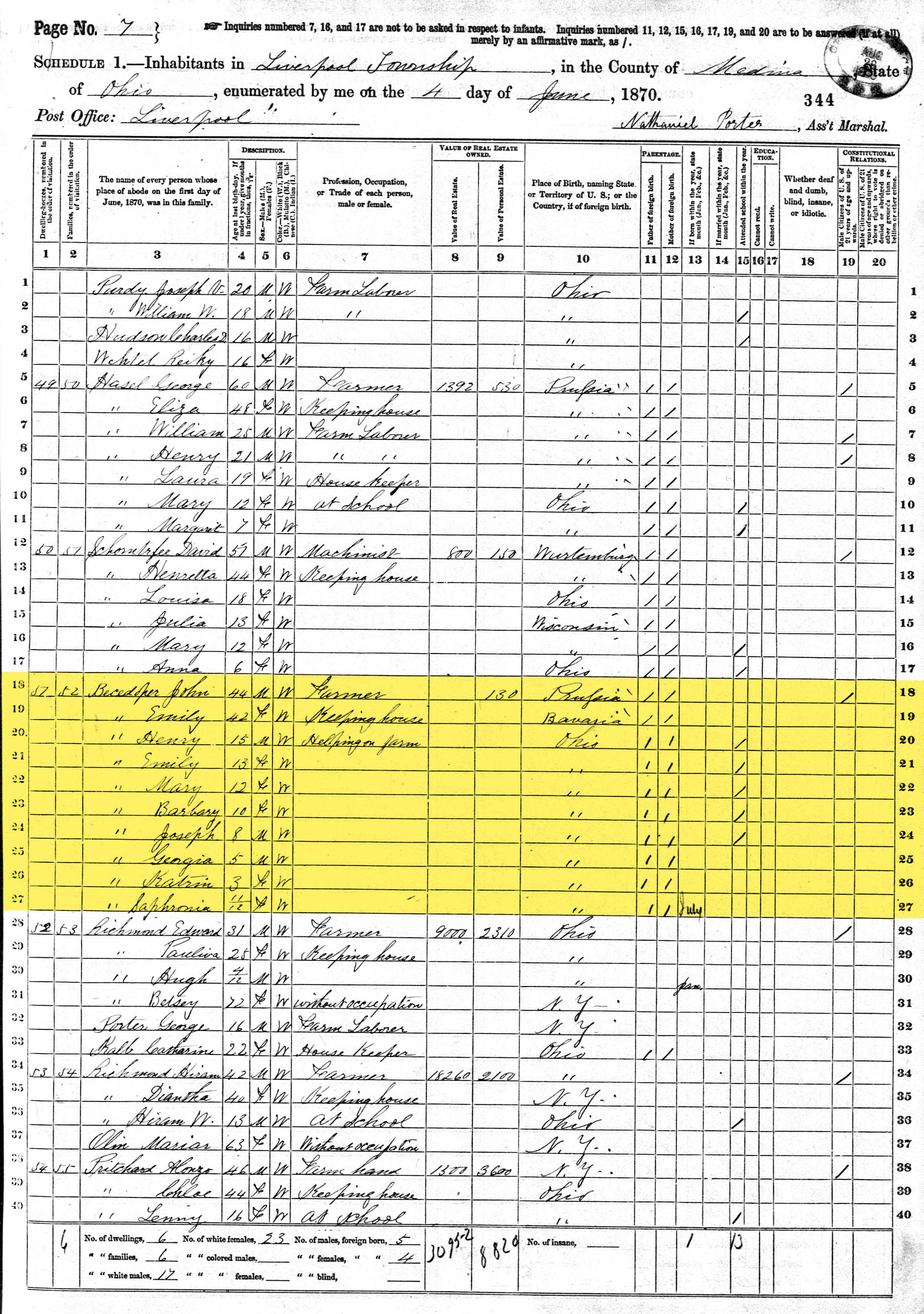 A While we have no proof to be certain, the extreme rarity of the Betzikofer name in general, and more specifically the United States, points to 3 men born around the same time, all from Germany and all being naturalized on the same date, in the same state and same courtroom as all being brothers (or at the very least close relatives).

B Various documents of the children of John and Emma Betsicover state that they were all born in Valley City, Ohio. While this is not concrete proof, it leads me to believe that even though the family is not mentioned on the 1860 census they were living in Liverpool Township. 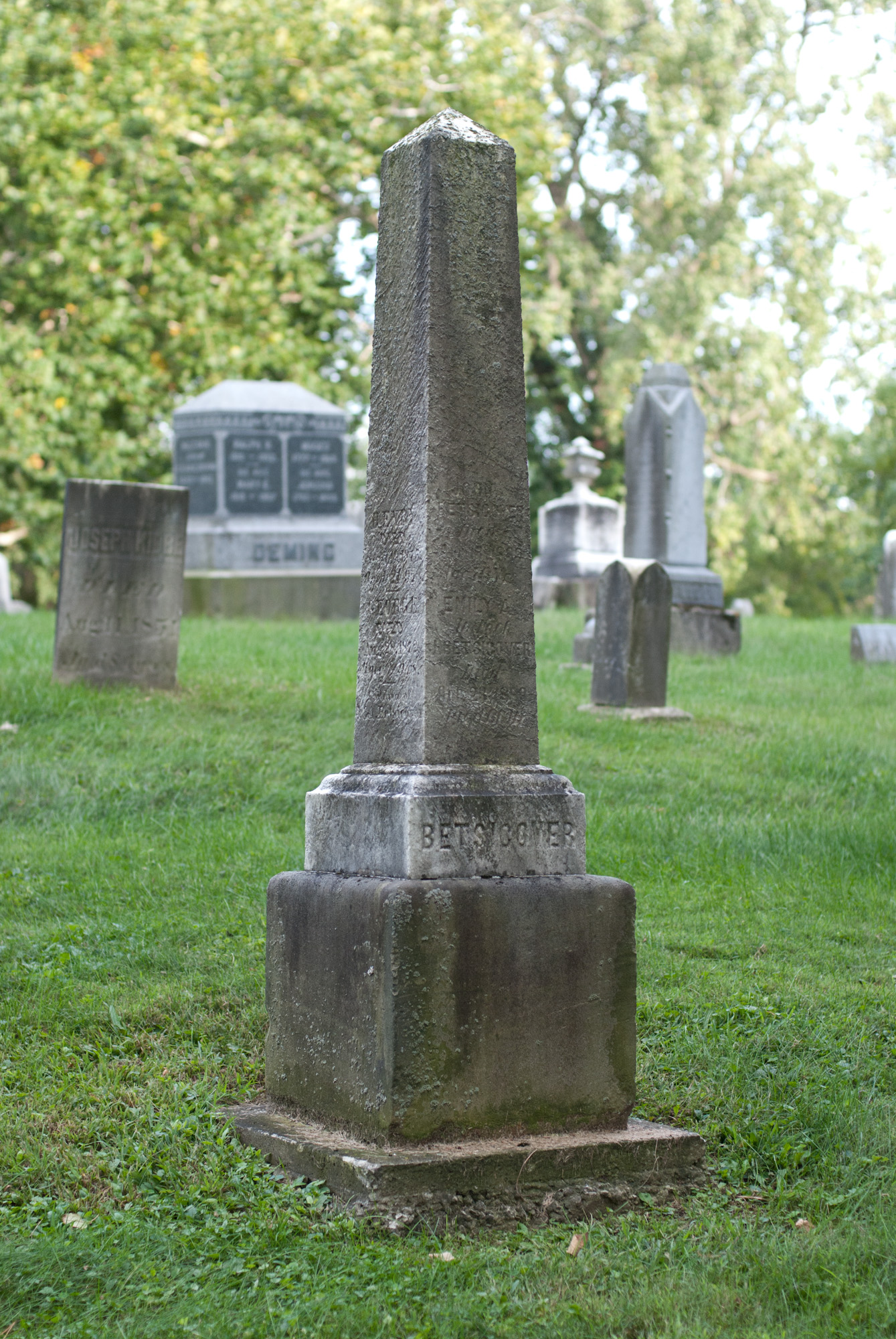 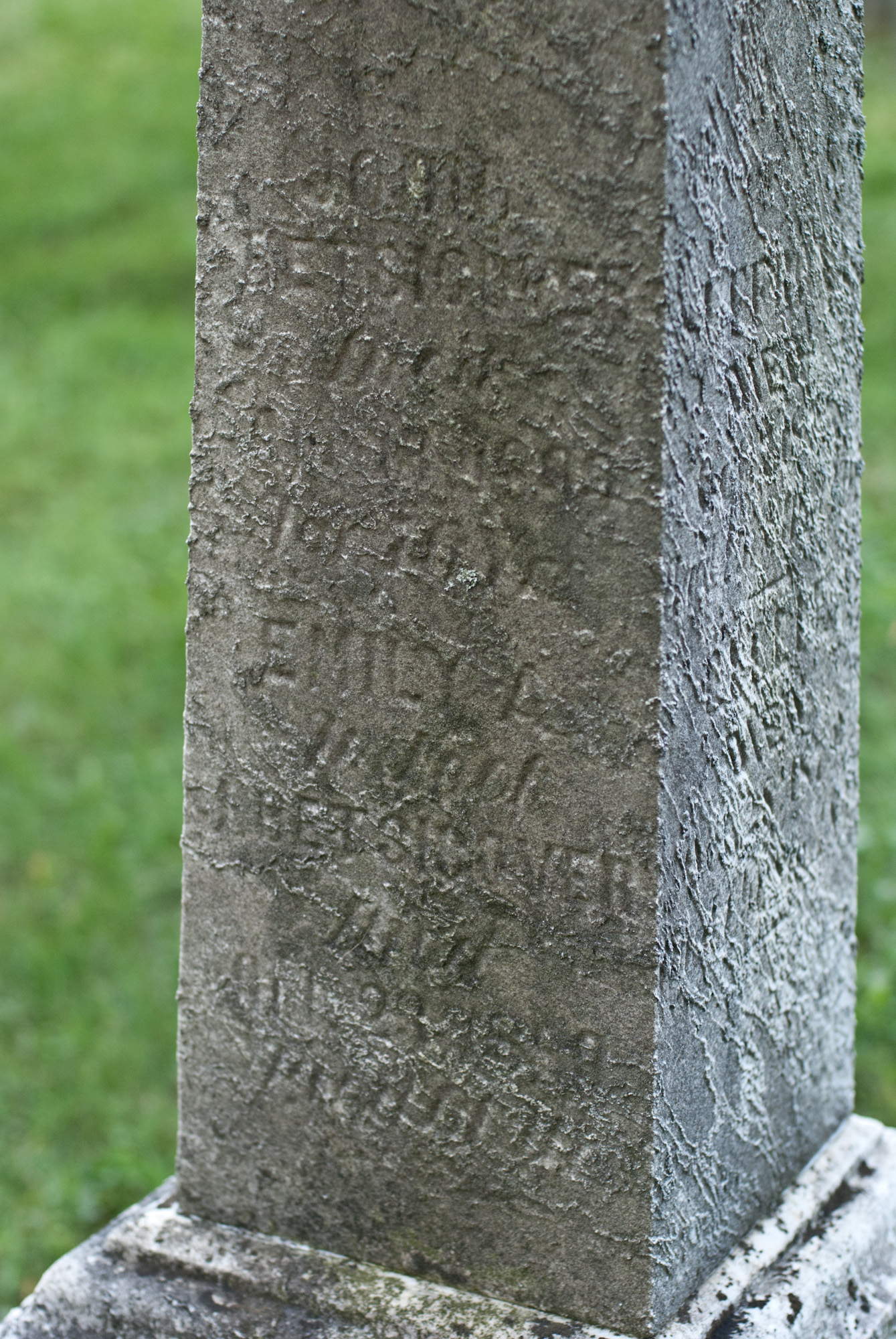