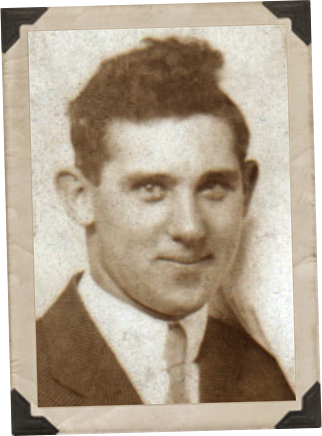 Not long after George was born his family moved to Columbia Township in Lorain, Ohio, which is where they can be found on the 1900 census. The census lists George as 6, living with his parents Samuel & Elizabeth, and siblings Harry, Elizabeth, Phillip, Arthur, and Samuel Jr on rented farm property.3

The following year, on 23 Jun 1901, George was baptized in the Columbia Township Methodist Episcopal Church by Rev. George L. Hanawalt.

Times were hard and the family was extremely poor. Stories passed down through the family says that George's parents were so poor that they were unable to provide for all their children. It's said they were sent out of the house at a young age to find work. George was said to have left home around the age of 12 to find a job and potentially provide for himself.

George against Wright Bros. Backdrop (1913)In early January 1910, at the age of 15, George's life changed forever. He was offered the opportunity to work a steady job for Mr. Gottlieb Mueller at Mueller's Meat Market in Cleveland. This is confirmed by The Elyria Republican newspaper which reported on the 13 January 1910 that "George Rogers has accepted a position at a city meat market."4

Before this time, George had never owned a pair of shoes. George told his grandchildren that to start out their relationship, Mr. Mueller bought George his first pair of shoes. It's also believed that the original terms of George's employment weren't as much for a paycheck as it was working for room & boardA. From this point on, Mr. Mueller became not only a boss for George, but as much of, if not more of a father to George than that of his own father.

George seems to be missing from the 1910 census. He would most certainly be living in Cleveland now that he's employed by Mr. Mueller at the meat market. He's probably living with Mr. Mueller at this time since he is only 15 years old, but wasn't counted for one reason or another. It's also possible he was already living above the butcher shop, but was somehow skipped over. The family belief was he was provided residence above the butcher shop from day one.

George and Edna RogersOn the 1 Jun 1913, Reverend E.T. MacMahon of Nottingham Congregation Church in Nottingham Township, Ohio (just east of Collinwood) married George Rogers and Edna GreeshaugeB. George was a 22 year old butcher, living at 9741 Lorain Ave. (the butcher shop) and Elna was 19, not working (or not listed as working, which was common), and a resident of Nottingham, Ohio.5

After marriage, on the 21 Jun 1914, their first child, daughter Edna Marie Rogers was born in Cleveland, Ohio.6 Cleveland city directory says George & Edna were living above the butcher shop at this time while George was still listed as a clerk in Mr. Mueller's store.7

The family can be found at 3134 West 99th Street in Cleveland City Directories from 1918-1921.7, 8 We also find them here on the 1920 census where George is said to own the residence free of a mortgage (pretty remarkable considering he didn't even own a pair of shoes 10 years prior). Here, in what's listed as Ward 1, George & Elna are both said to be 26, able to read & write, and living with child, Edna M., age 5 who is attending school.9

On 10 Jun 1922 in Cleveland, George and Elna welcome their second child, son George Frederick Rogers, Junior into the world.

George with his wife and daughterBased on the 1922 Cleveland City Directory, the family moves 3051 West 101st Street. They can be found here all the way though the 1930 census to 1935. When they are counted on the 1930 census George is again marked as a butcher, living in a residence he owns that is valued at $8000 (around the median for the area). He and Elna are both listed as 36, with daughter Edna M, 15, and son George F, 7.10

By 1934 George entered into a partnership with Mr. Mueller and Mueller's Meat Market became Mueller & Rogers Foods which is how the butcher shop is listed on the 1934 Cleveland City Directory. 11

George saved every penny he could while working for Mr. Mueller. When hard times hit and the economy tanked, many customers and friends found themselves in the same position George's parents were in when George was growing up: poor, having a hard time feeding their families and close to losing their homes. George would hear about a family's trouble, go to the bank and purchase their house outright. The family would then have a place to stay without worrying about losing their home. All were extremely grateful for such generosity shown by George. Many families would eventually be able to pay George back, and when done so George returned them the deed to their house, but some never could. These homes, became rental properties for the family. George acted as landlord for these properties, managing and maintaining them over the years.

George behind the Butcher Shop (1941)On the 1940 census, George & family are living above the butcher shop at 9741 Lorain Road. George and Elna are listed as 46 years old, Georgie (Jr) is living with them and is 17 years old. The whole family is employed at the butcher shop. George is the butcher and is noted as working a 60 hour week, Elna is a saleslady and worked 12 hours, and Georgie is working as a delivery boy for the "retail meat market."12

Sometime around 1943 George would take all that money he saved working for Mr. Mueller, buy out his partner and officially purchase the butcher shop, changing the name to Rogers Foods.13 George would continue the partnership with Mr. Mueller keep him on as an employee until he was ready to officially retire.

In mid-late June of 1942, Georgie (Jr), now 20, ran away from home and against his family's wishes, joined the Army on 22 Jun 1942 at Fort Benjamin in Harrison, Indiana.14 This greatly upset the family because, as member of the "food service industry", George and Georgie (Jr) were both exempt from the draft and neither were required to serve their country. The government determined that their efforts were better served at home, providing the service his family supplied to the public.

The Butcher Shop (1942)Georgie was assigned to the 91st Calvary Recon Squadron, an infantry division of the Army.15 Here he saw action in Africa and was part of the capture and occupation of Rome, Italy where he was wounded on the 10 Jan 1944.16 After Georgie's recovery he again went back into service.

On the 8 Jul 1944 Georgie and his unit were on patrol somewhere in the vicinity of Montecatini, Italy when they took small arms fire. Georgie, who had achieved the rank of Corporal by the time, was struck and killed.17 It took a long time for Georgie to be brought home and buried at the family plot at Columbia Cemetery in Columbia Station, Lorain, Ohio. Temporarily, Georgie was buried at US Military Cemetery in Follonica, Italy until his body was able to be returned home.18

The news of Georgie's death nearly destroyed the Rogers family. George and Elna went into deep depression and were unable to do much of anything except mourn the loss of their son. If it weren't for the efforts of their daughter Edna and her husband Ralph Schnell, the family would have lost the butcher shop. Ralph quit his job as a chicken farmer and with Edna's help, the two of them took over the business' day to day operations.

George and Mr. Mueller at the Butcher ShopThe affects of Georgie's death got so bad that Ralph and Edna thought the two would never recover. They made plans and started construction on a pair of houses, side-by-side, sharing a single driveway at 19608 & 19610 Westwood Drive in Strongsville, Ohio. This was to be where George and Elna could move to and be cared for by Ralph and Edna.

This wasn't to be the case however and one day, George and Edna crawled out of their depression. While they were able to carry on, they never fully recovered. Georgie was never talked about, Georgie became a ghost that loomed over the family, causing grief and pain at just the mention of his name. (Even some 20 odd years later, grandchildren & great grandchildren would have to discuss Georgie with Ralph or other members of the extended family if they wanted to find out about him.)

In George's later years, the maintenance on all the properties he owned became too much for him to handle all by himself. George would eventually pass landlord responsibilities onto his son-in-law Ralph Schnell and they stayed in the family until the late 80's when they were sold off. By this time the neighborhoods were becoming less than desirable and the homes were of the age where there was always something that was broken or breaking.

Obituary in the Cleveland Plain Dealer (1972)
George sold Rogers' Foods in 1968, retiring after 55 years as operator according to his obituary (a newspaper noting his hire at the butcher shop marks retirement after 58 years in business).2 After retirement George kept ownership of the building and rented out the storefront to another business. At one point the place even became the home of a florist. George and Edna continued to live above "the butcher shop" and stayed there the rest of George's life.

Both Elna and George were buried at Columbia Center Cemetery at 13699 County Highway 60 in Columbia Station, Ohio next to their son Georgie. 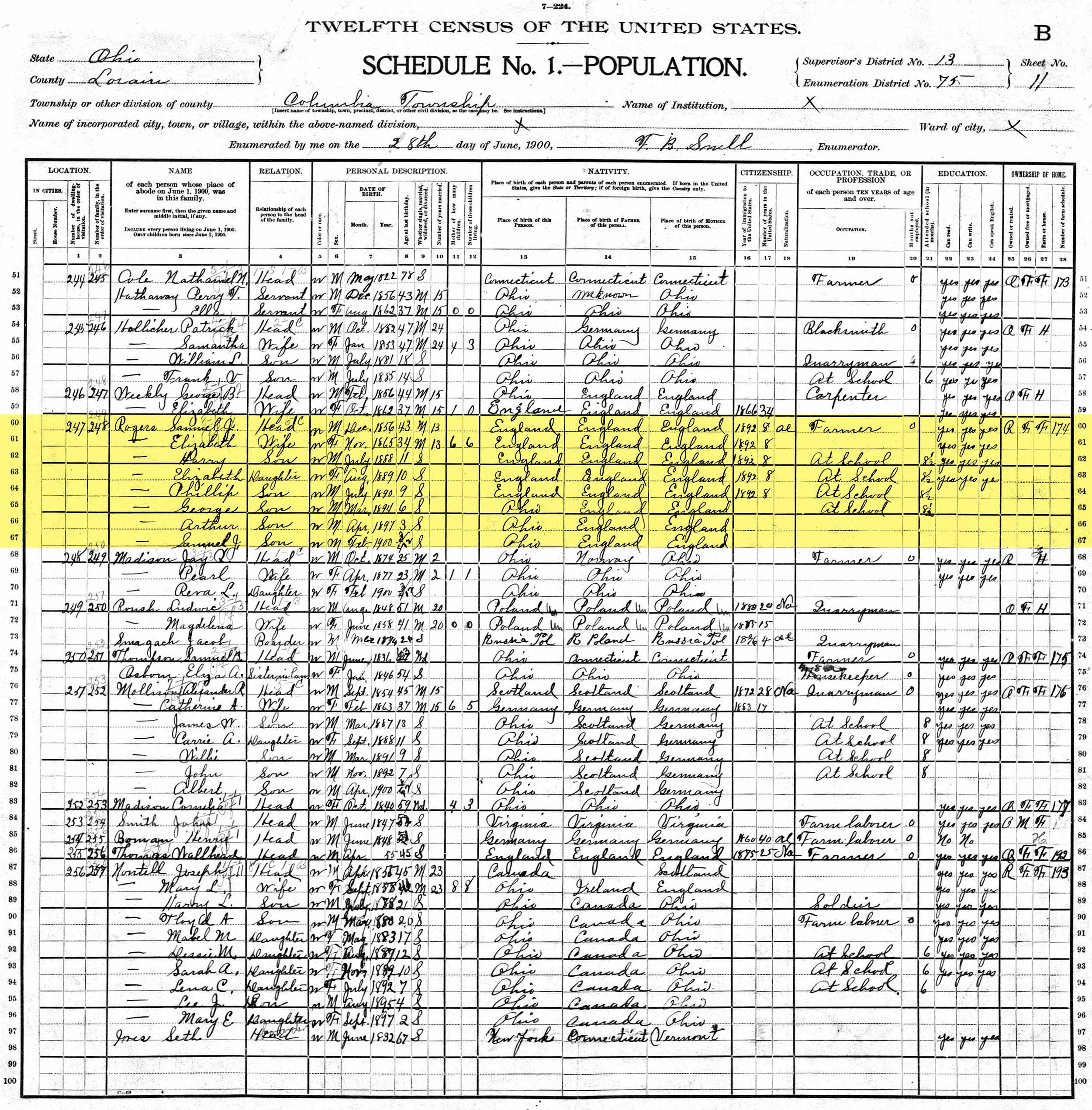 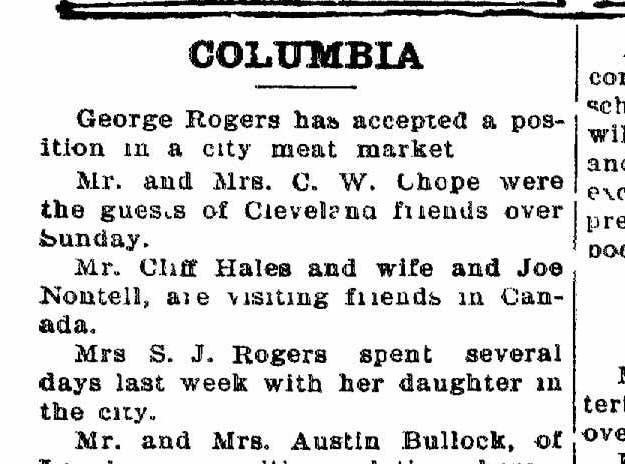 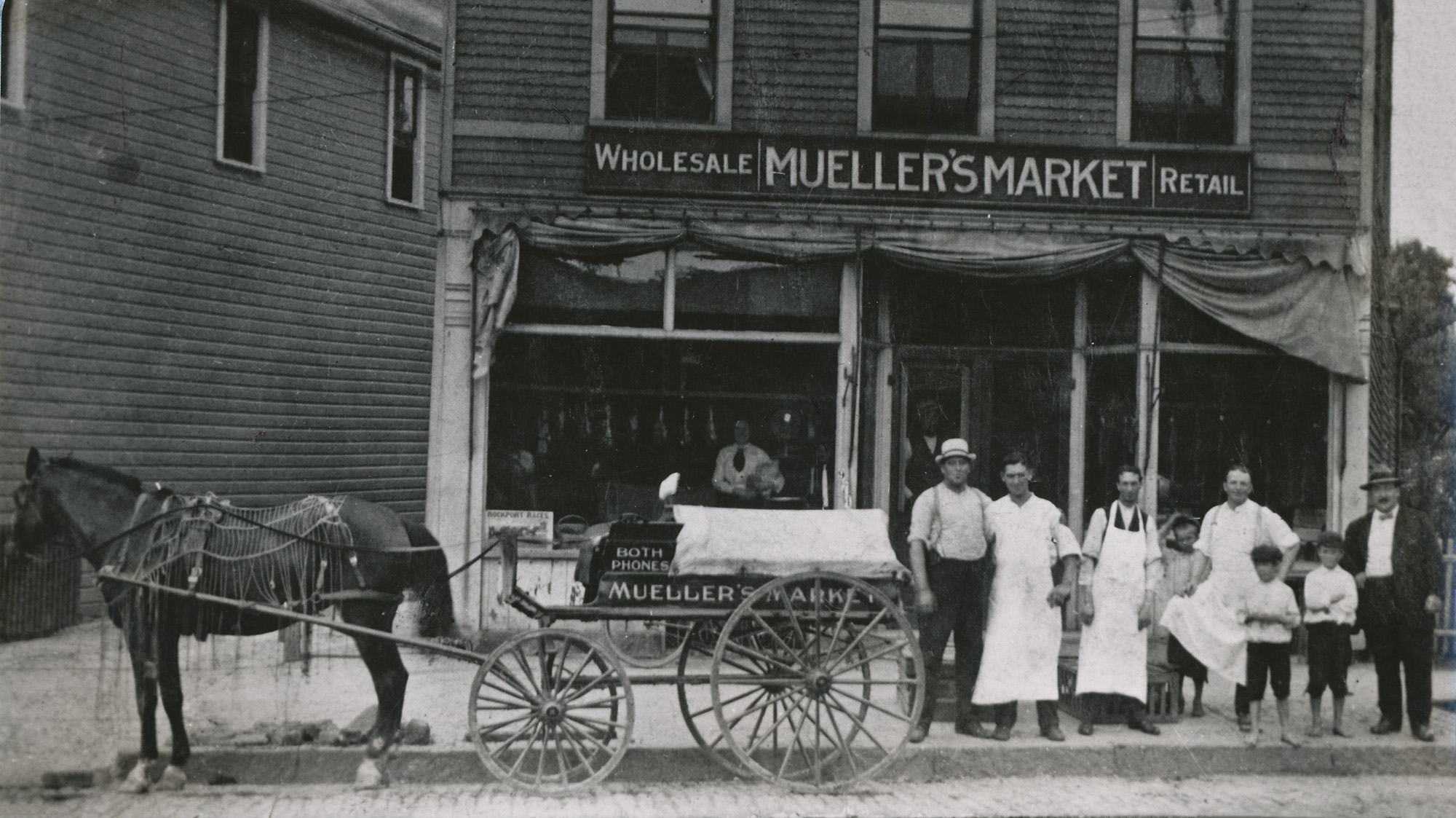 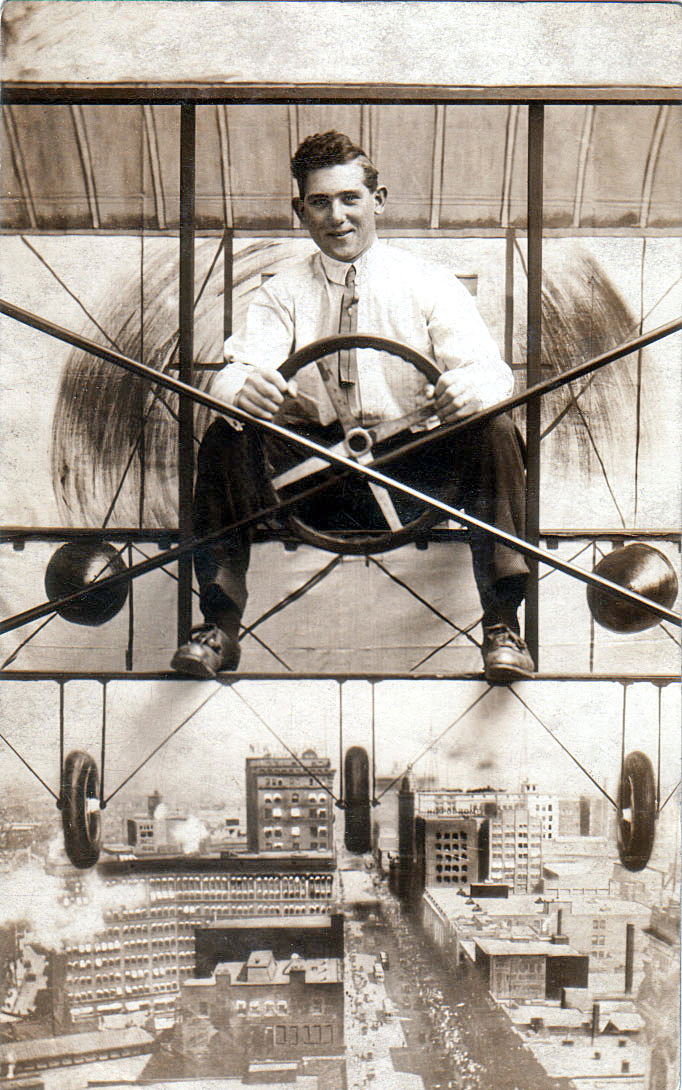 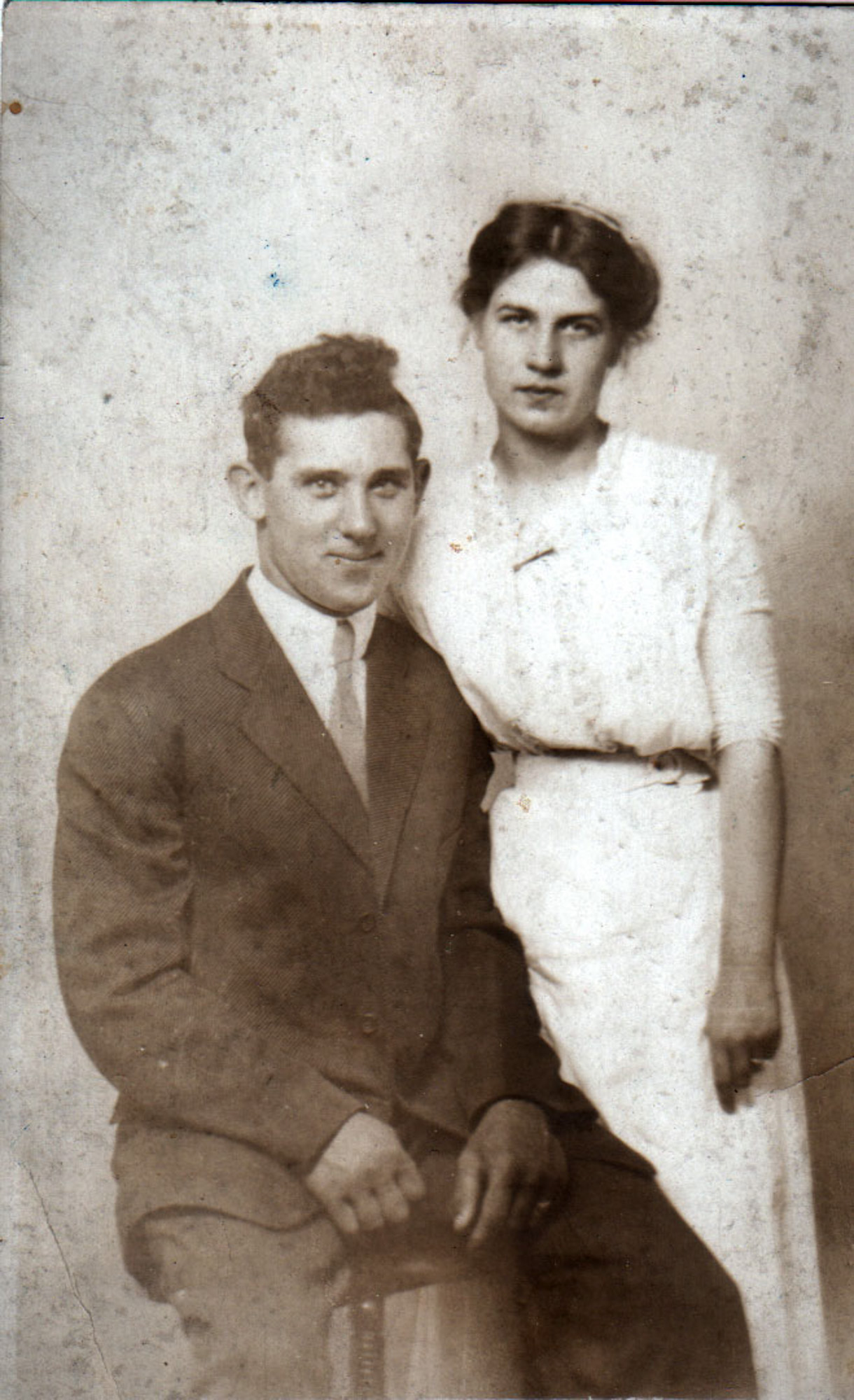 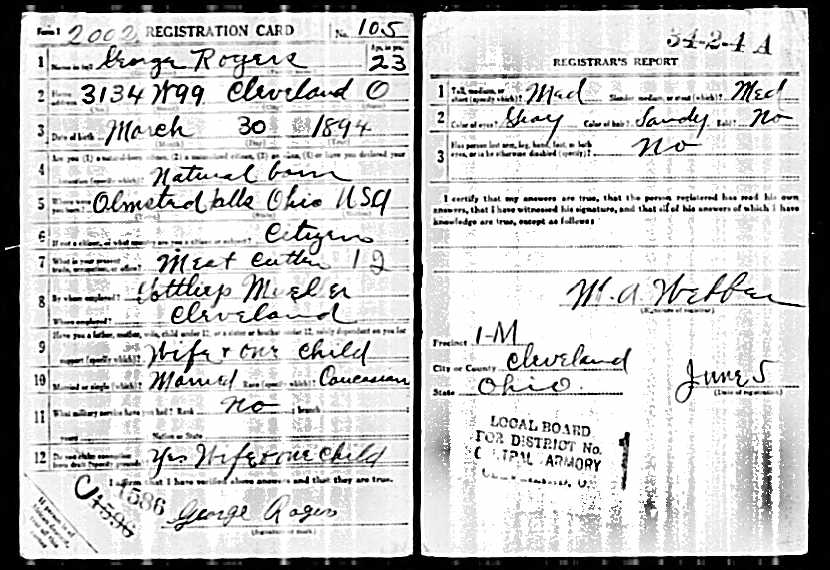 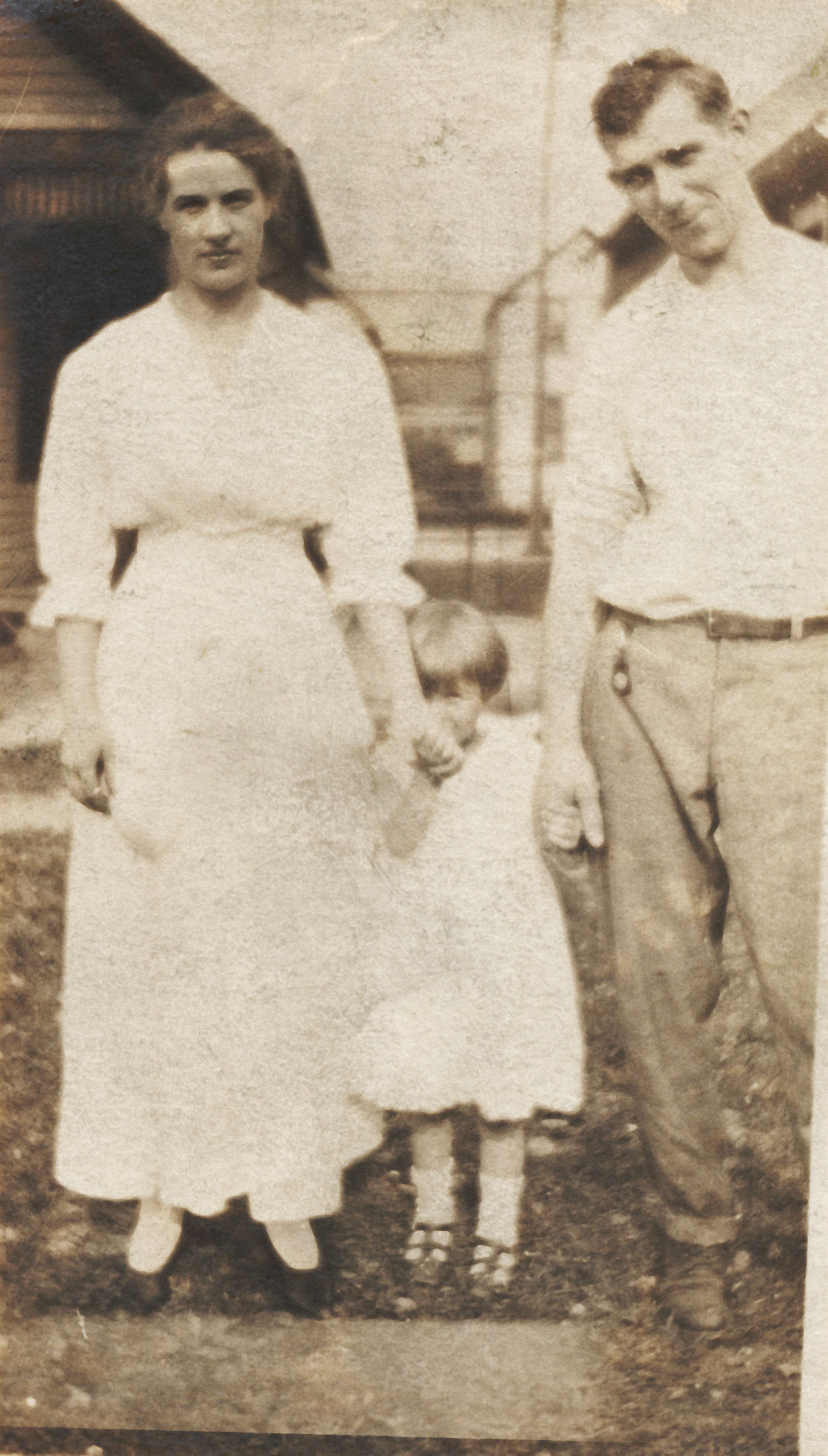 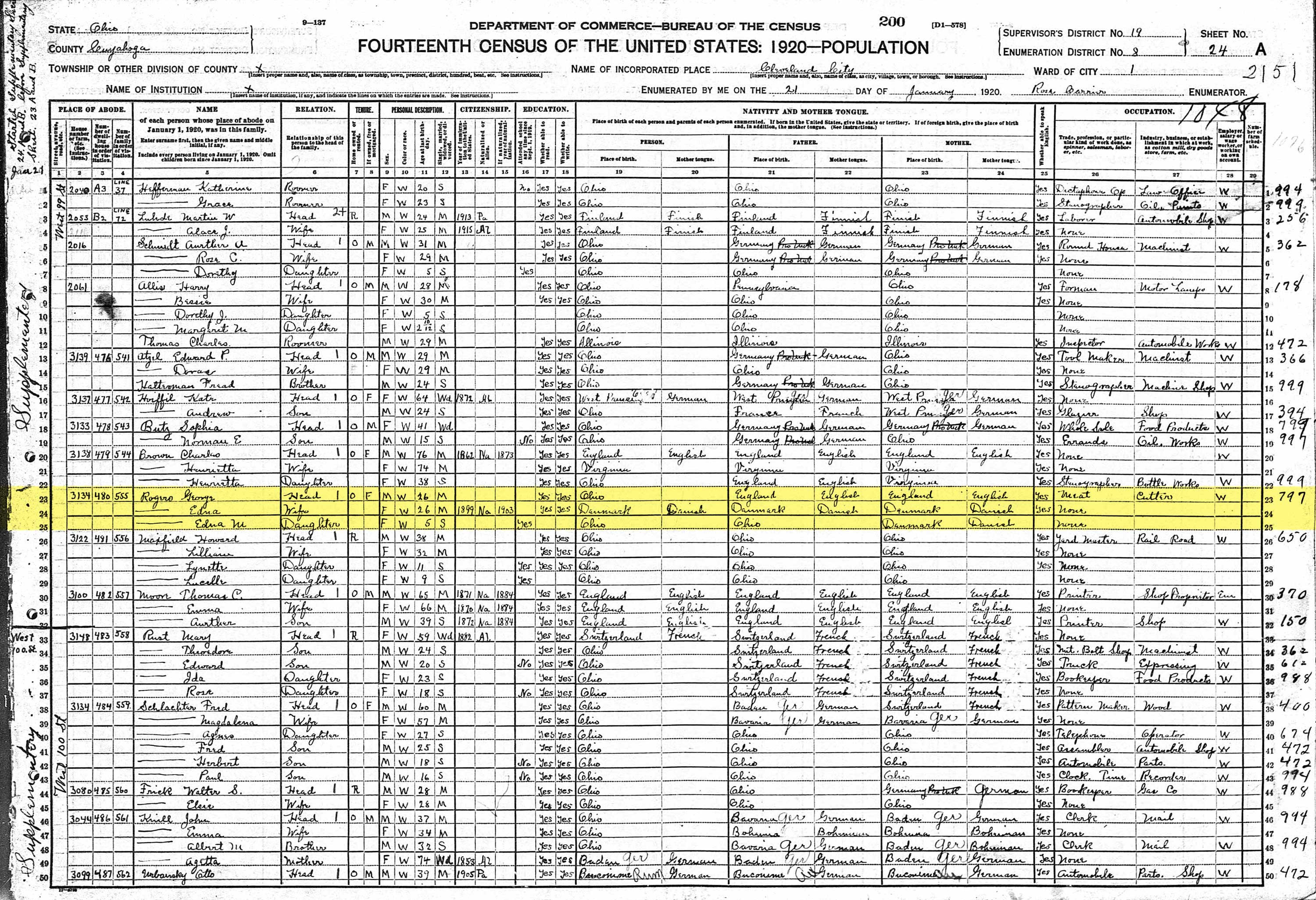 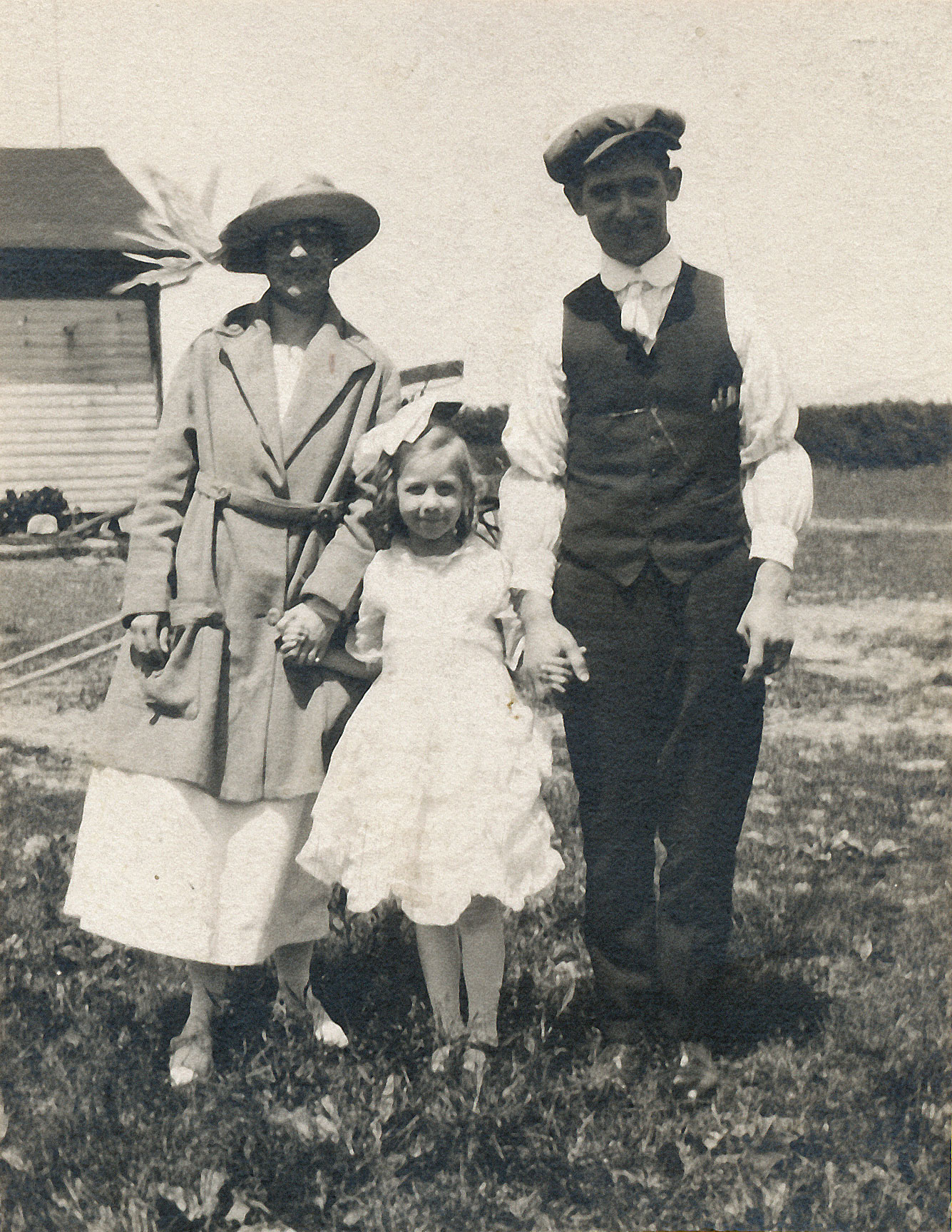 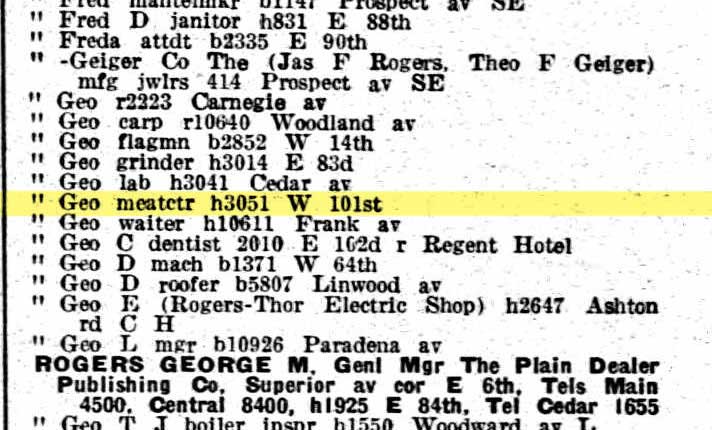 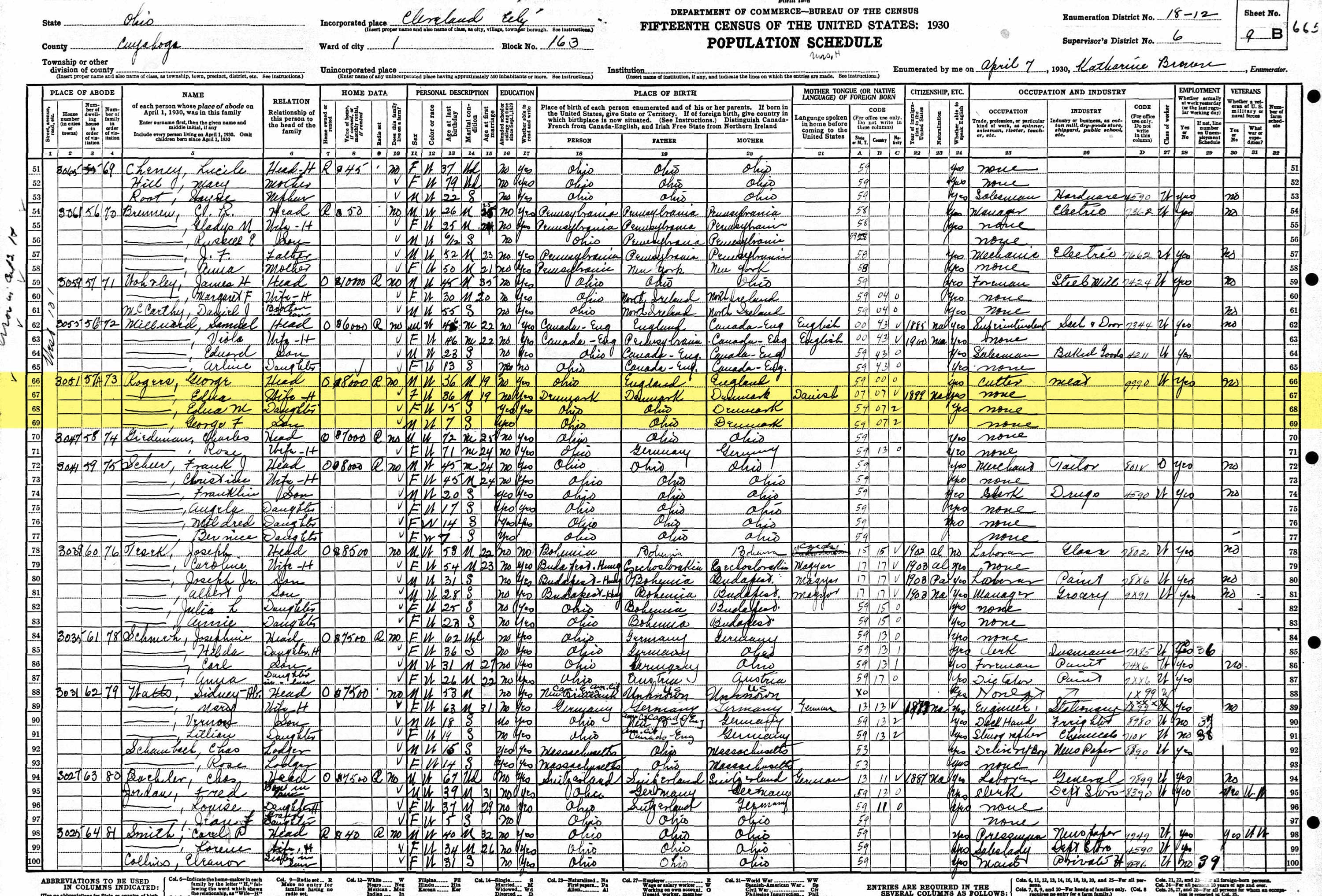 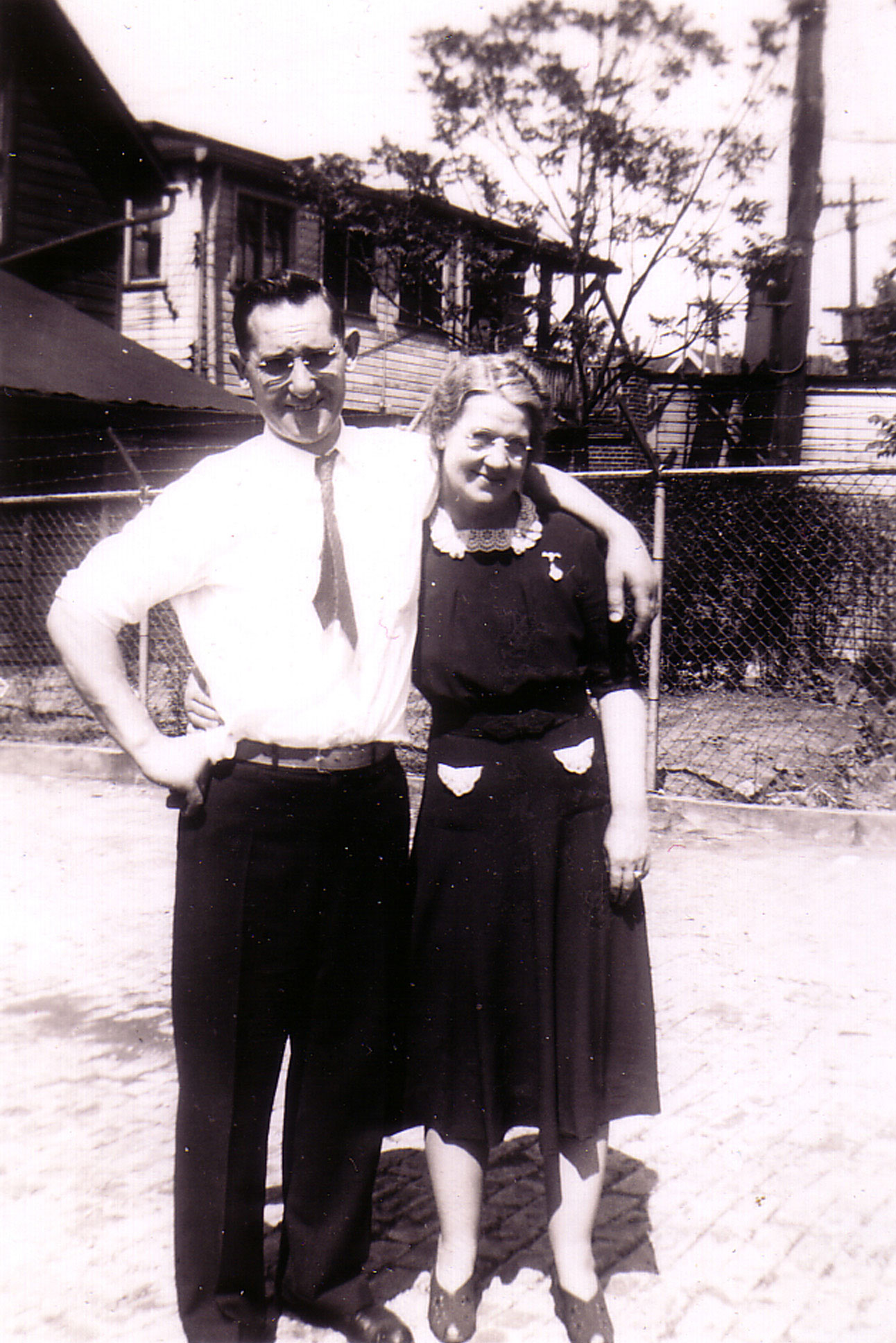 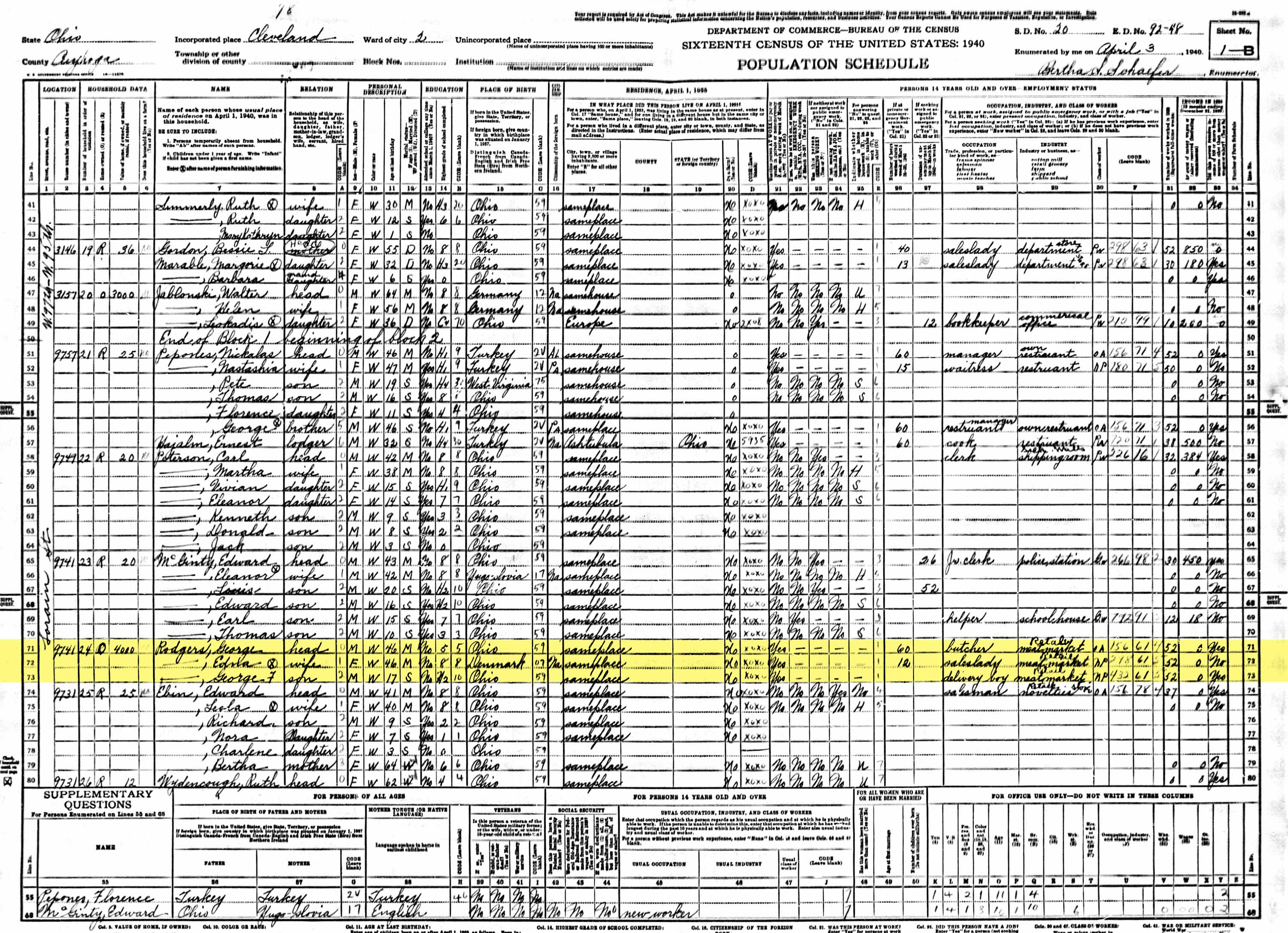 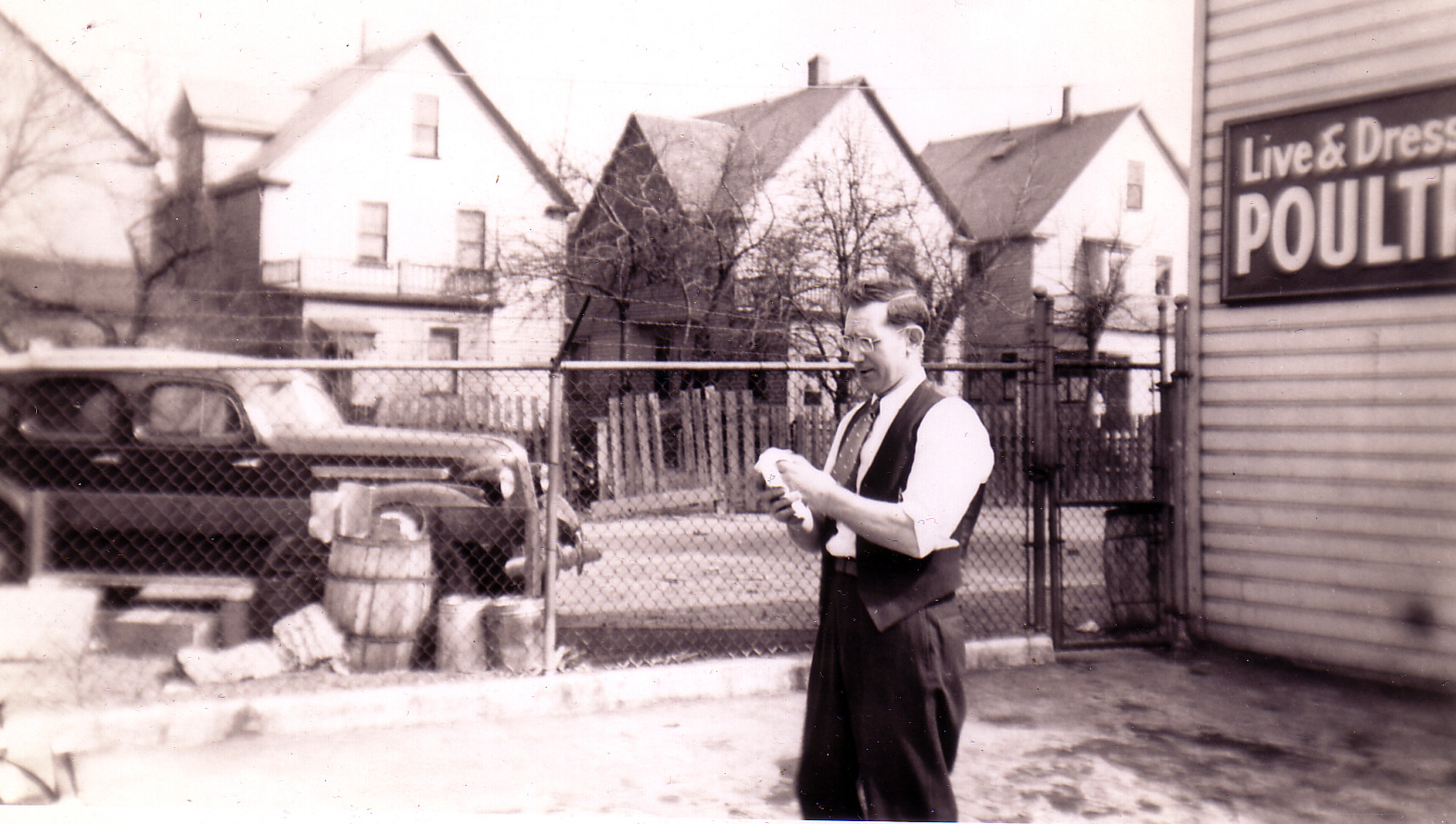 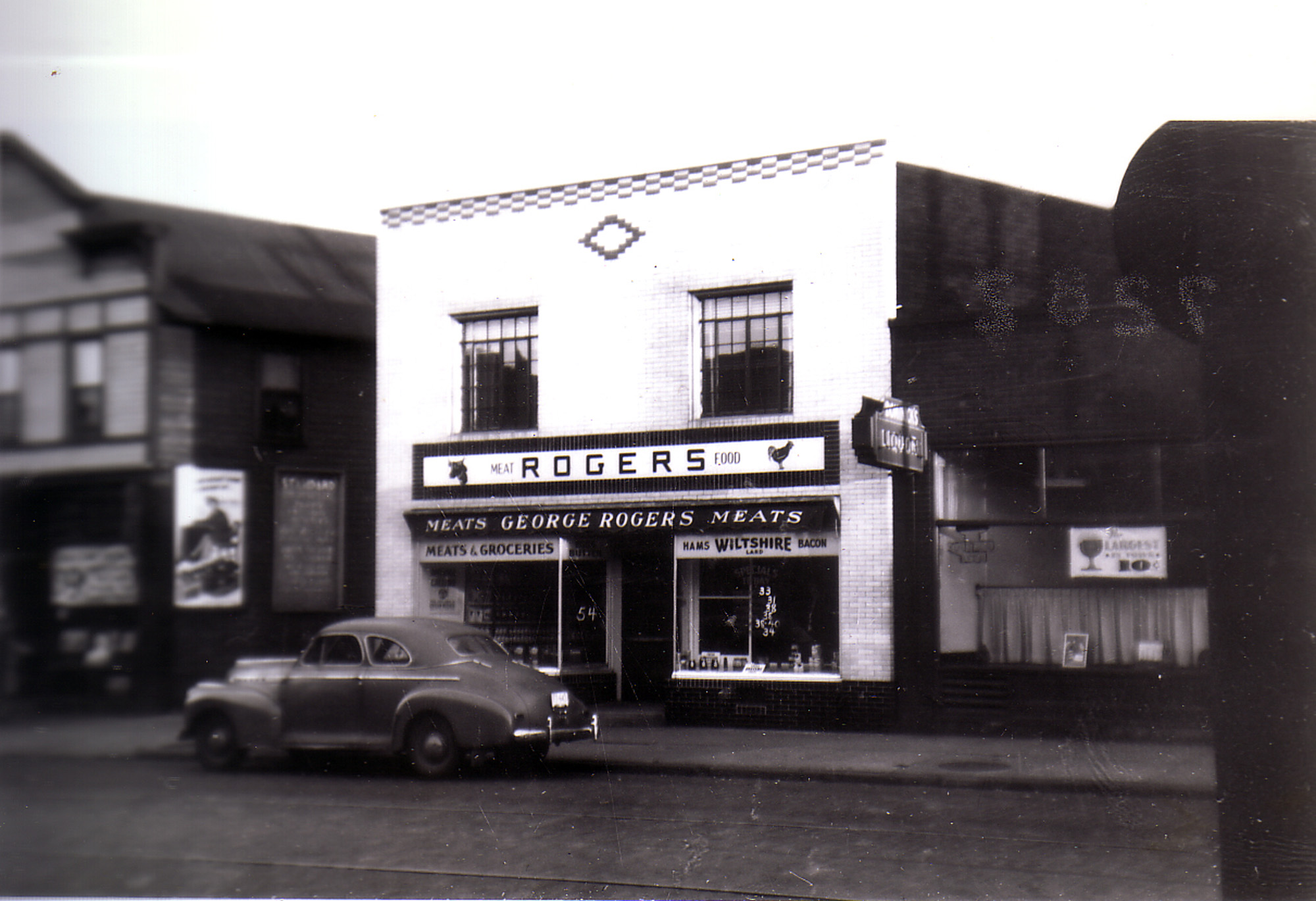 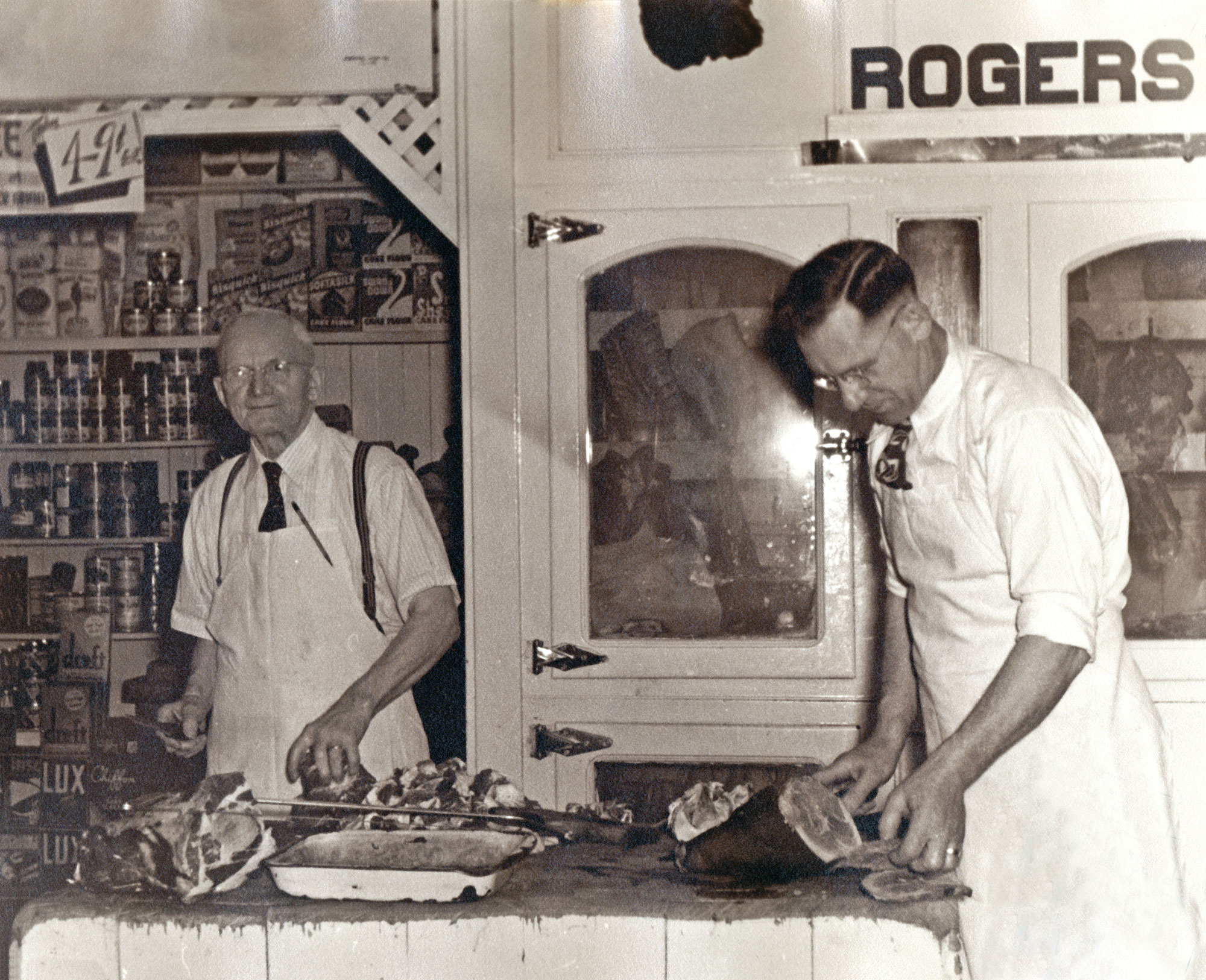 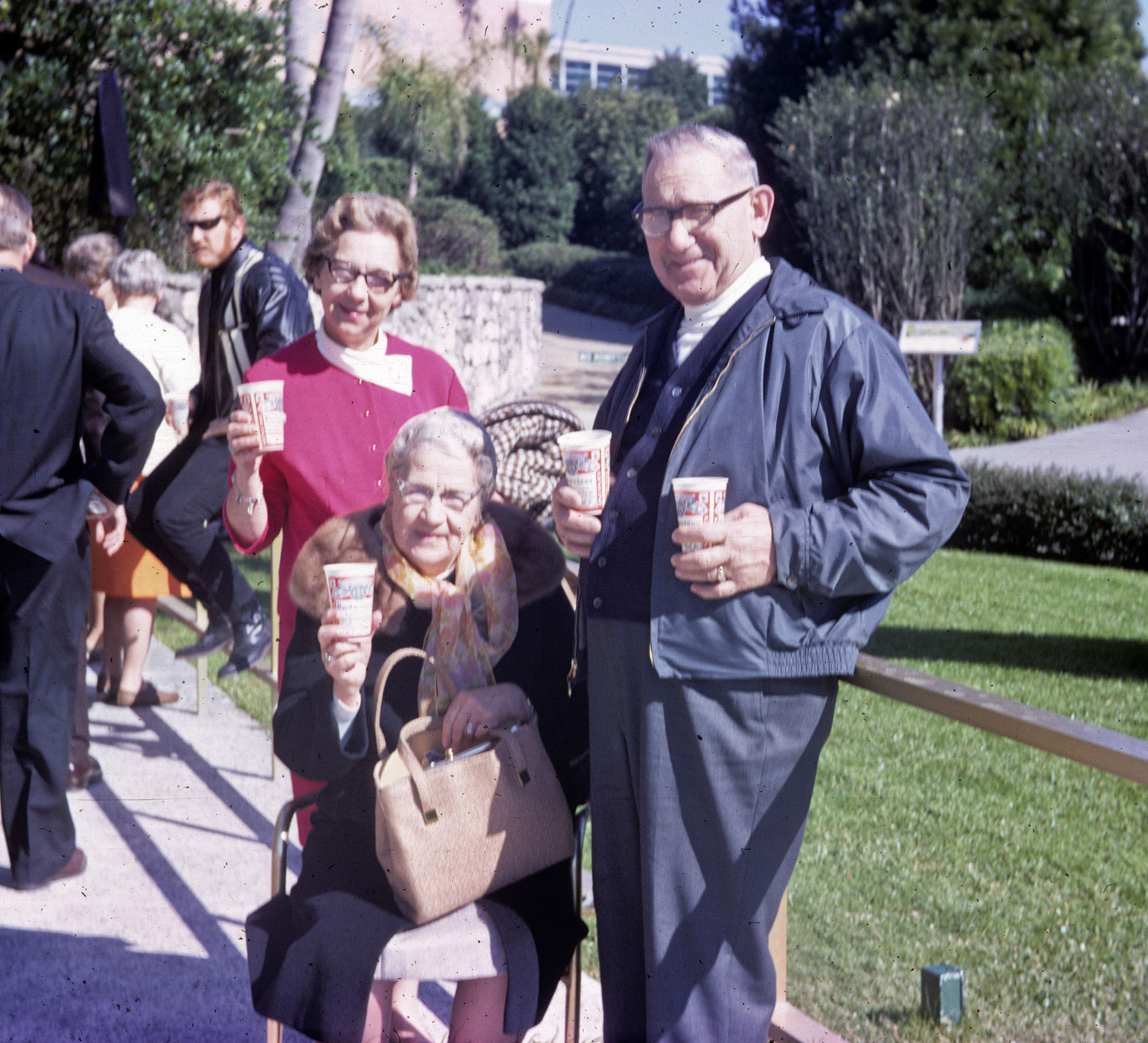 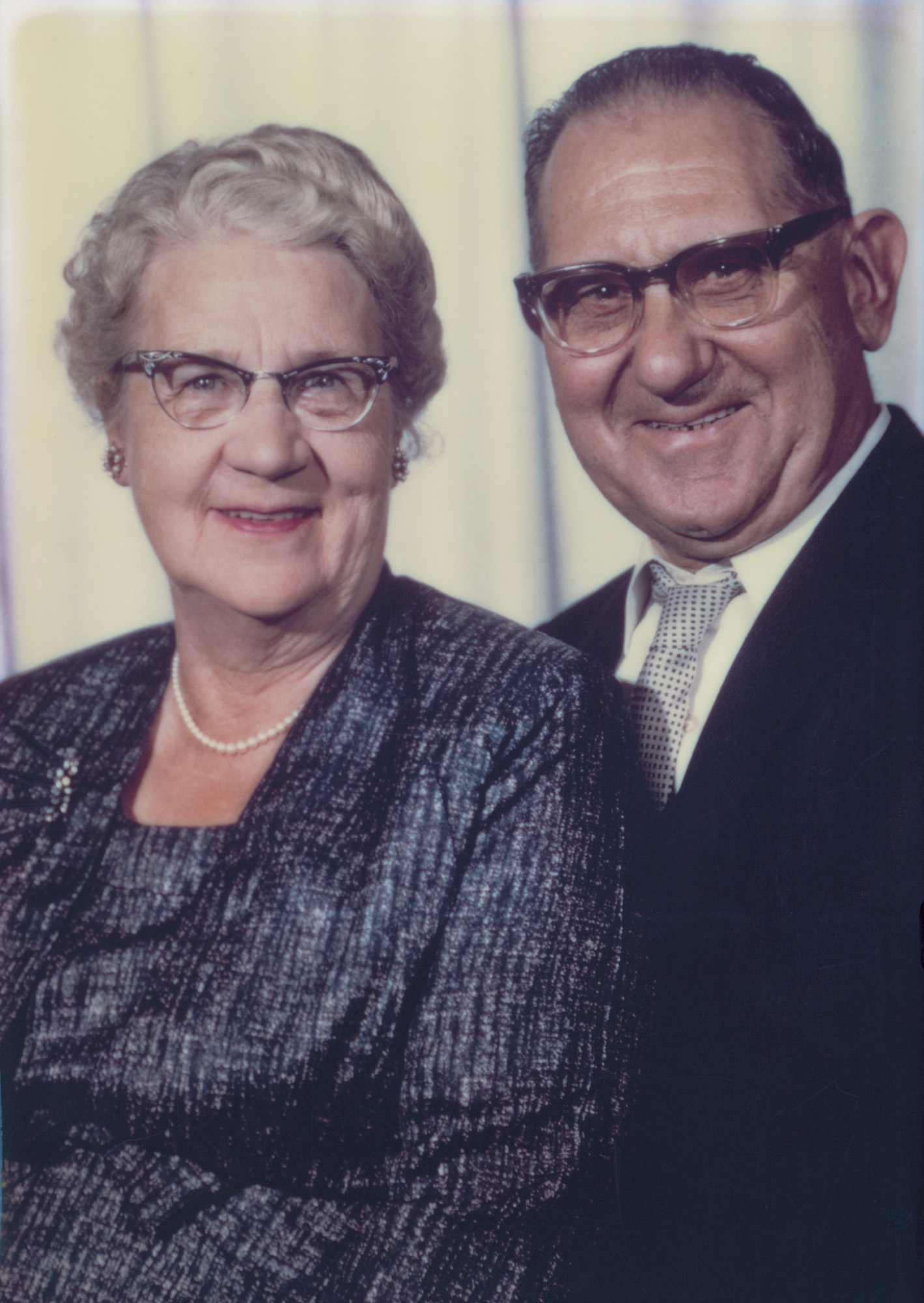 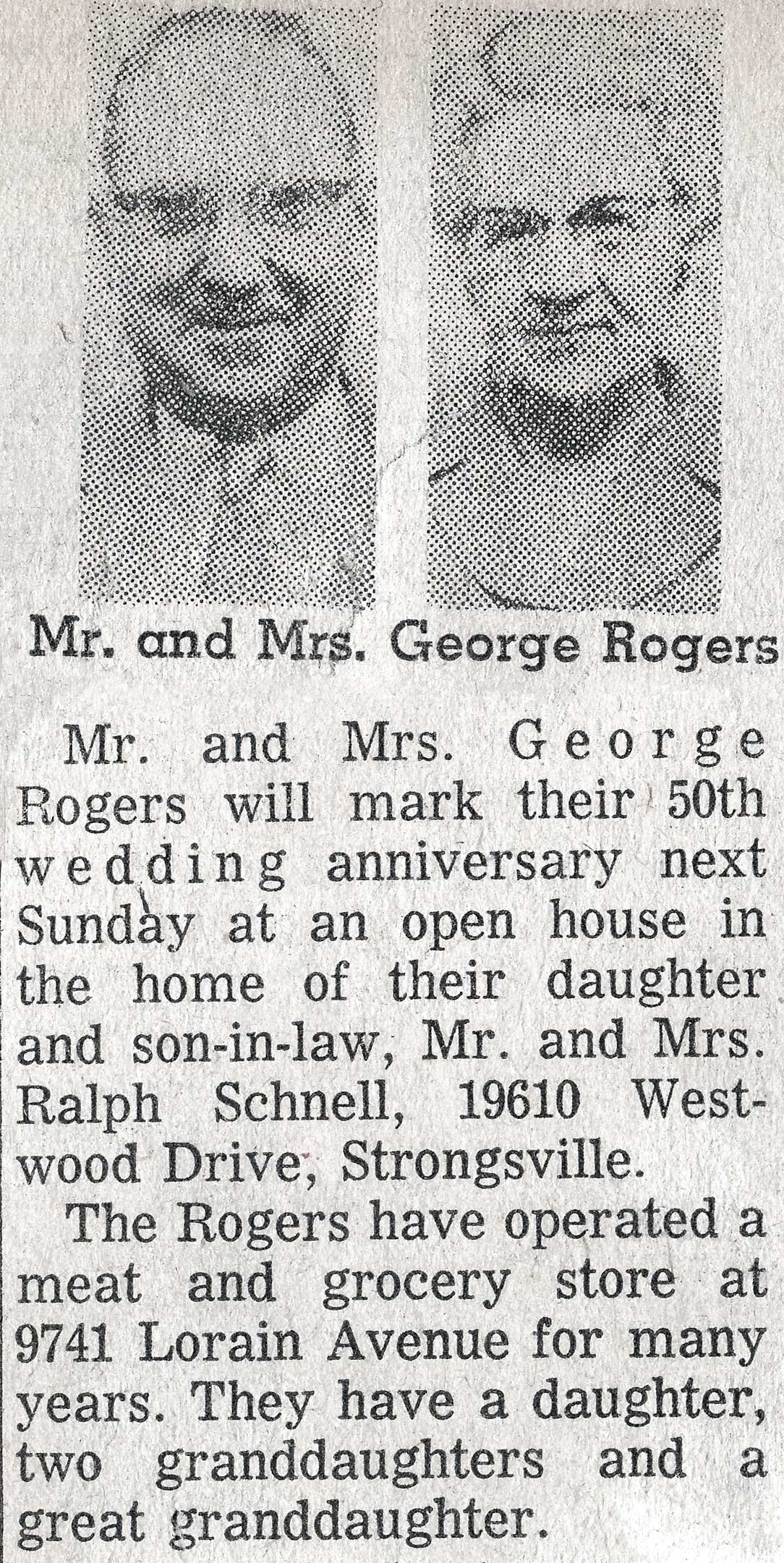 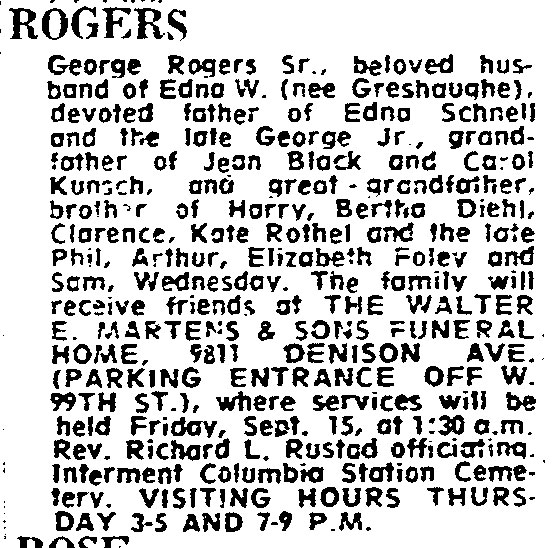 A This is further evidence that supports the assupmtion that George was sent out (read: kicked) of the house at a young age to provide for and shelter himself.

B Edna Greshauge was born Elna Wilhelmina Mortensen. Even though Elna was know for the majority of her life as Edna Greshauge, I will continue to refer to her throughout as ELNA so as not to create any confusion between her and her daughter who was named Edna by birth. So if Elna is stated, it's the mother Edna Wilhelmina, if Edna is stated, its the daughter Edna Marie.

* Any information here that does not have a specific source provided for it came from conversations with my family, whether that was George & Edna’s grandchildren or my mother, a great grandchild, all of whom were raised in the butcher shop. 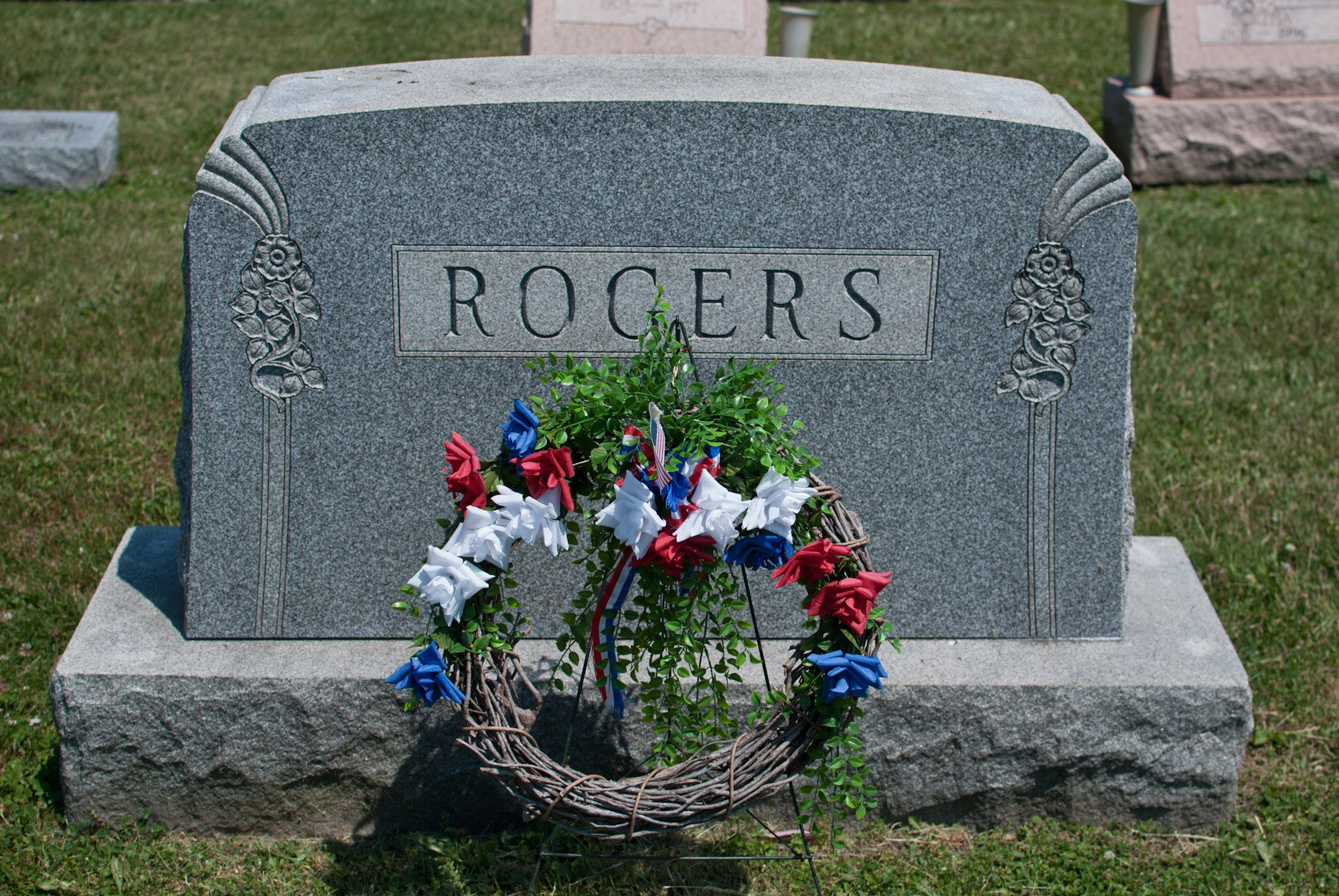 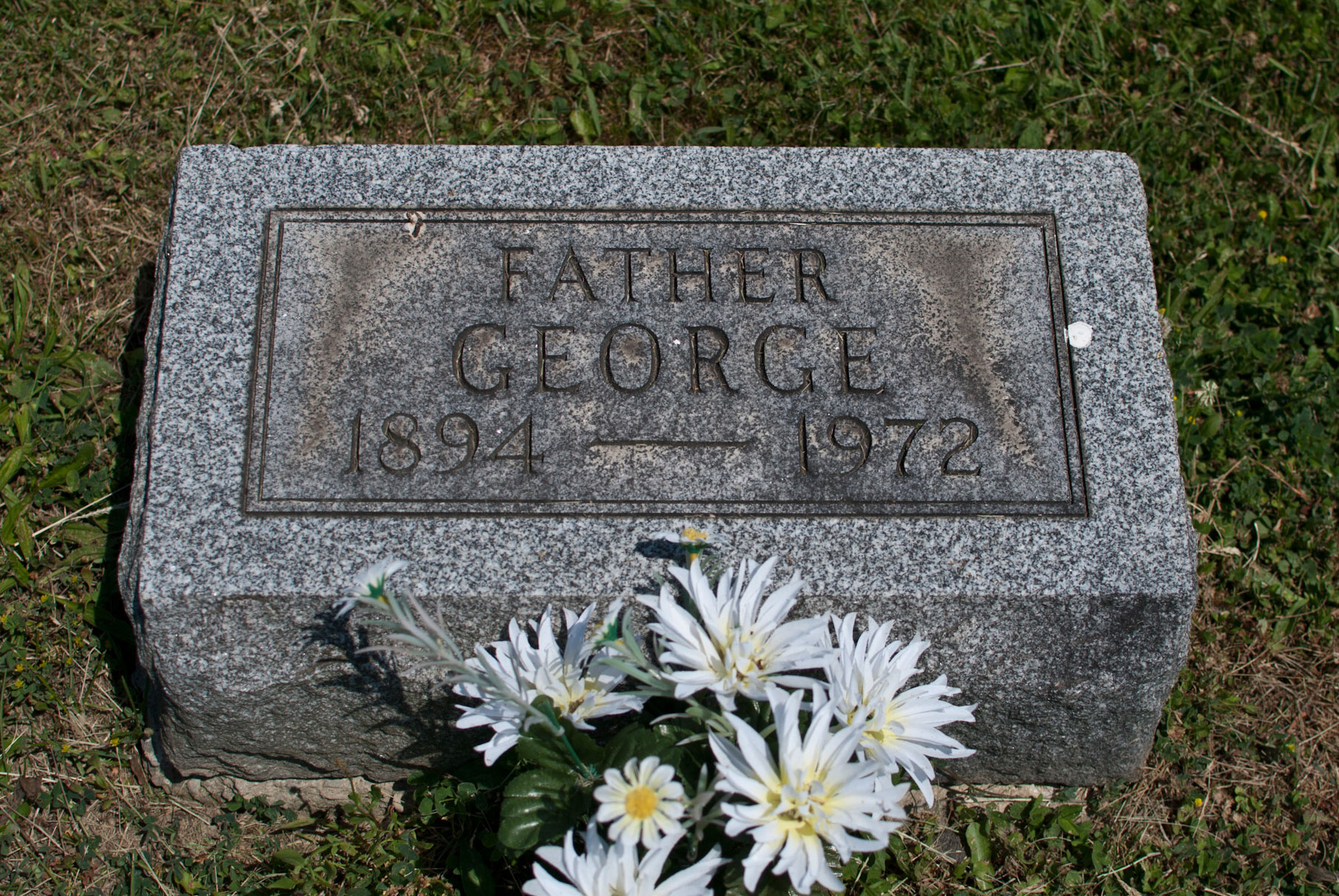