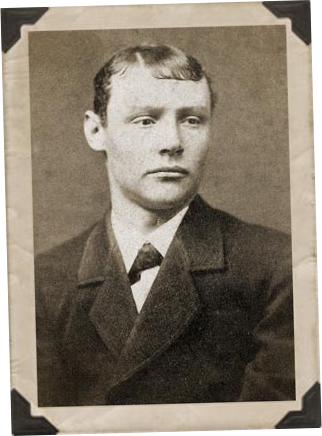 George and brother Frank (1863)George Edward Christian was born on 22 Nov 1858 in Berea, Cuyahoga, Ohio to parents Edward Christian and Maria Simons.1 George was the oldest of 9 children, 6 of whom were boys.

He grew up on Beech Street in the historic district of Berea, Cuyahoga, Ohio (known as the Village of Berea at the time). George was the son of an immigrant Tailor who was not only a prominent businessman, but also member of the local community who regularly had a hand in public affairs. While George was a child, his father rose to president of the board of education and later, after George had eventually grown, town mayor. Here in Berea, George was educated and learned to read and write. Once he got old enough, he worked as a laborer and machinist.2

On the 24 Sep 1873, George lost his younger brother Frank to typhoid fever. George was only 14 years old and Frank was 12 at the time. This time had to be tough for George as Frank was undoubtedly his best friend.

This wouldn't be the only tragedy to affect the Christian family however. Four years later, in 1877, brother Fred (who was 3-1/2 years younger than George) was also struck by typhoid. He would never fully recover from the illness. In 1881, his family sent him to Iowa to live with his mother's family, thinking the change in scenery/climate would help to improve Fred condition. This wasn't to be the case and after a while, Fred returned home. At the end of July 1882, around Fred's 20th birthday, a cold settled in his chest (lungs) and it never left. Fred died 27 Aug 1882.

While it was recorded on 8 January 1887, a deed of sale for 11 Gregg St. from Samuel & Alice Barker for $250 was likely signed in the final days of 1886. The property was otherwise known as Sublot 4 of Samuel Barker's subdivision in original Brooklyn Twp lot 56.

This means that in 1887, the family moved to Cleveland Township, Cuyahoga, Ohio at 11 Gregg Street where George worked as a machinistB. George and Frankie had a total of 5 sons & 2 daughters and by 1897 they were also caring for Frankie’s father Rufus Dodge who had recently moved in after losing his wife. Interestingly, the 1900 census describes that George spent 2 months unemployed in the previous year.4

George (center) surrounded by his family (1903)On the 04 September 1903, the Christian family sold their home at 11 Gregg St. and moved out to Medina Township, Medina, Ohio (an area also referred to as Weymouth) and bought a house near the intersection of Old Weymouth and Remsen roads (as referenced by the 1910 census). Here George took up work as a General Farmer.

Most of his children got married and moved out and by 1910 George and Frankie were living with son Howard, daughter Mona, and son Fred with his wife Valeska remaining. Daughter (Ethel) Lucille & her husband Merrill lived next door for a while before they moved to Hinckley. (The 1910 census states George owned their home)5, A

George died on 07 Feb 1917 at 5:30 A.M. in Weymouth, Medina, Ohio from Brights disease: a general term for kidney disease.1, C The Medina Gazette reported that George was a longtime sufferer of heart disease and had been confined to the house in his final days.6 The Medina Sentinel mentioned that George had fallen from a tree the year prior (1916) and it was believed the fall escalated his condition. His death occurred at 5 o'clock, almost 24 hours after his father's death (15 miles north in Berea). Funeral took place on 09 Feb 1917 in Berea at father's home on 95 Beech Street in Berea. George was buried in the Christian family plot at Woodvale Cemetery in Middleburg Heights with his parents.1 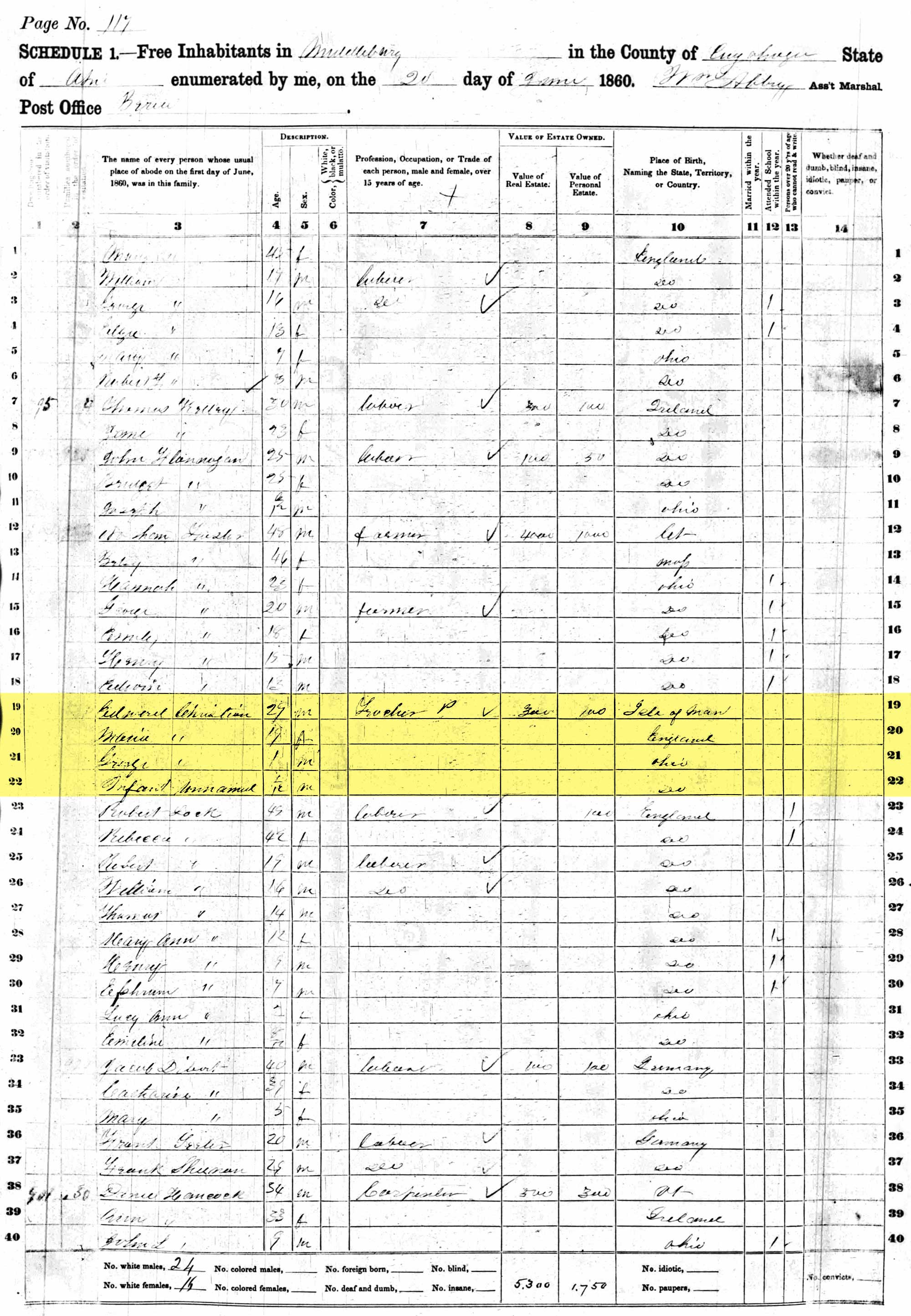 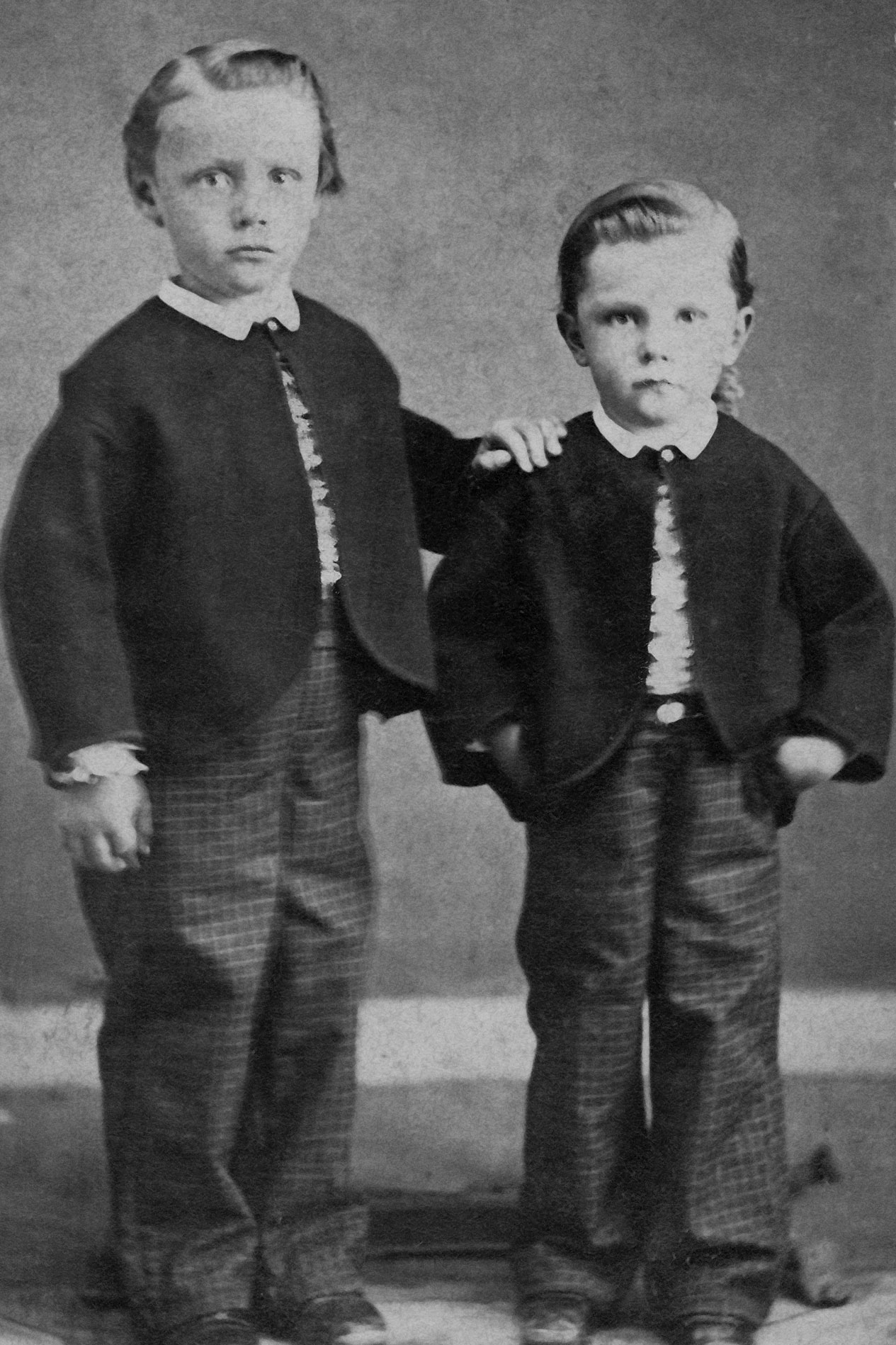 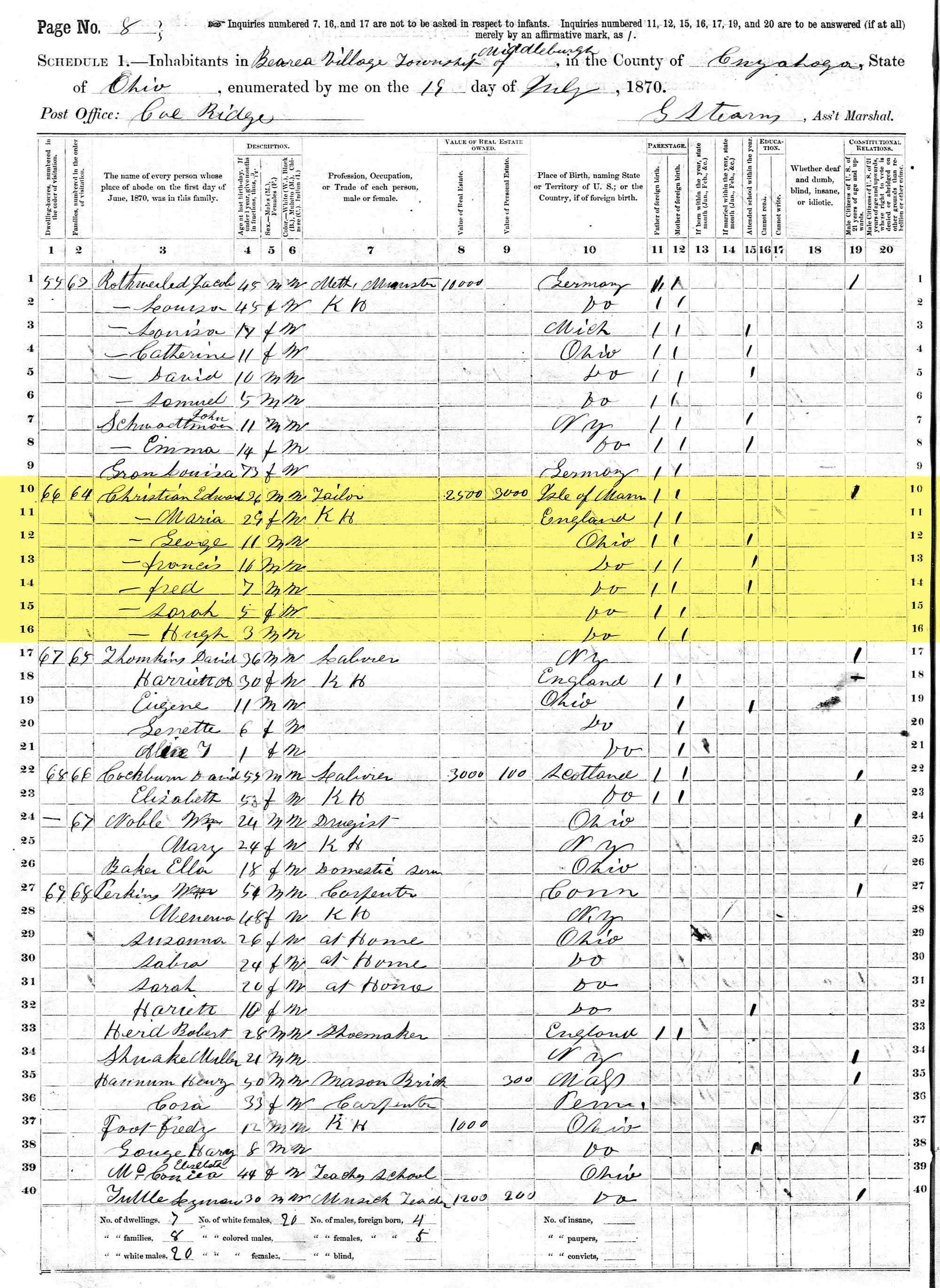 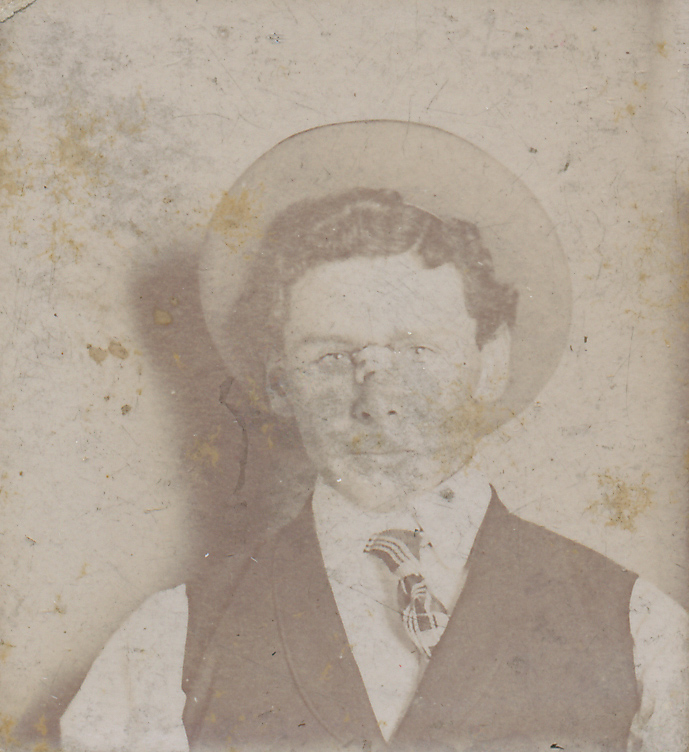 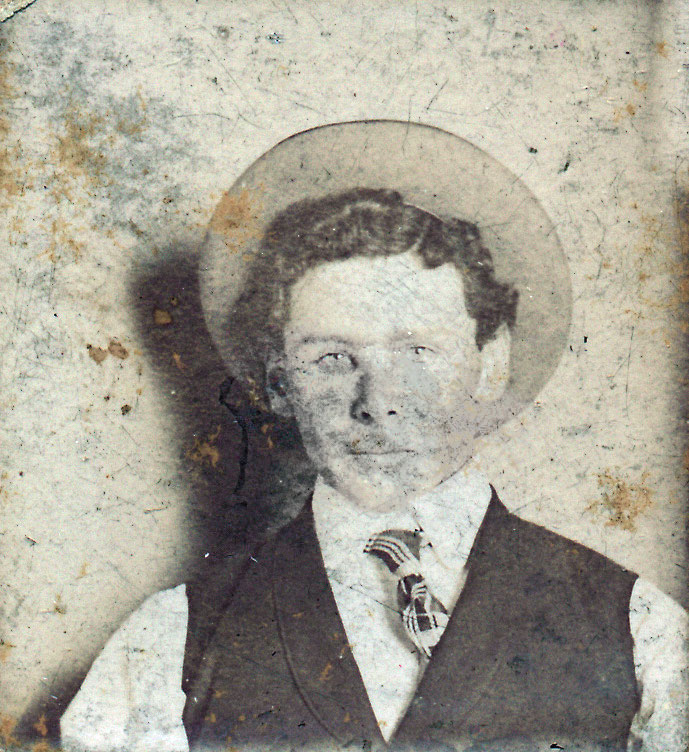 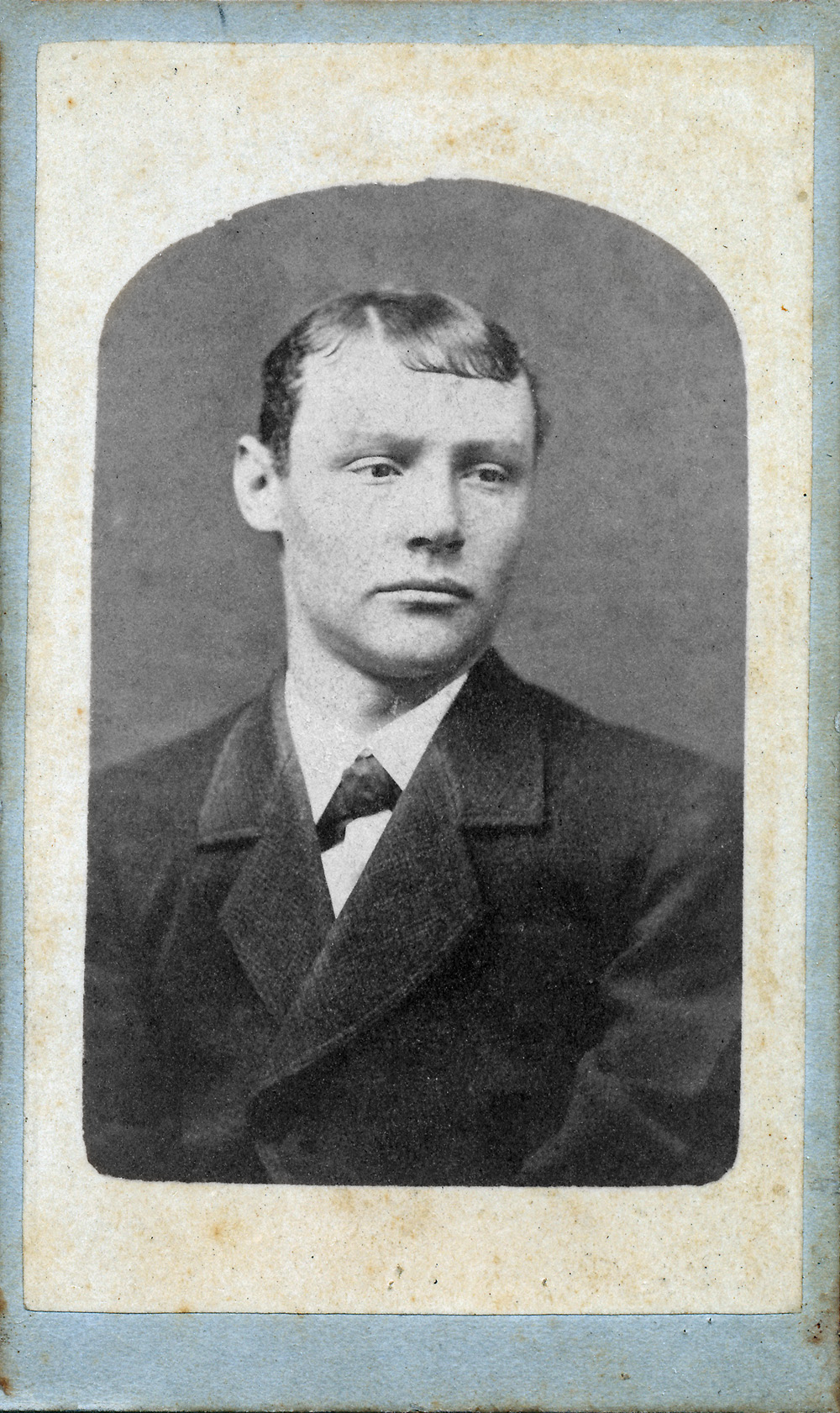 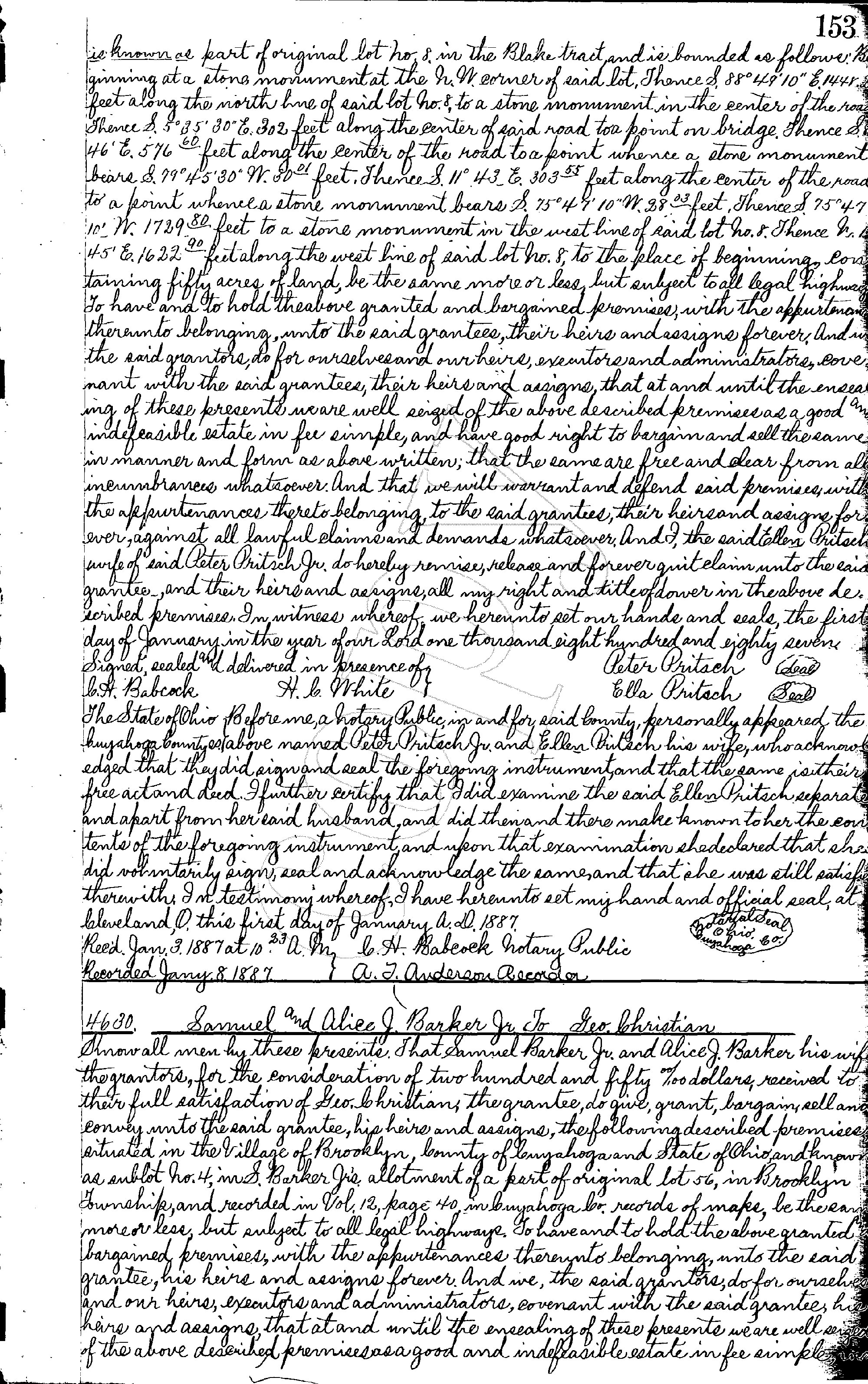 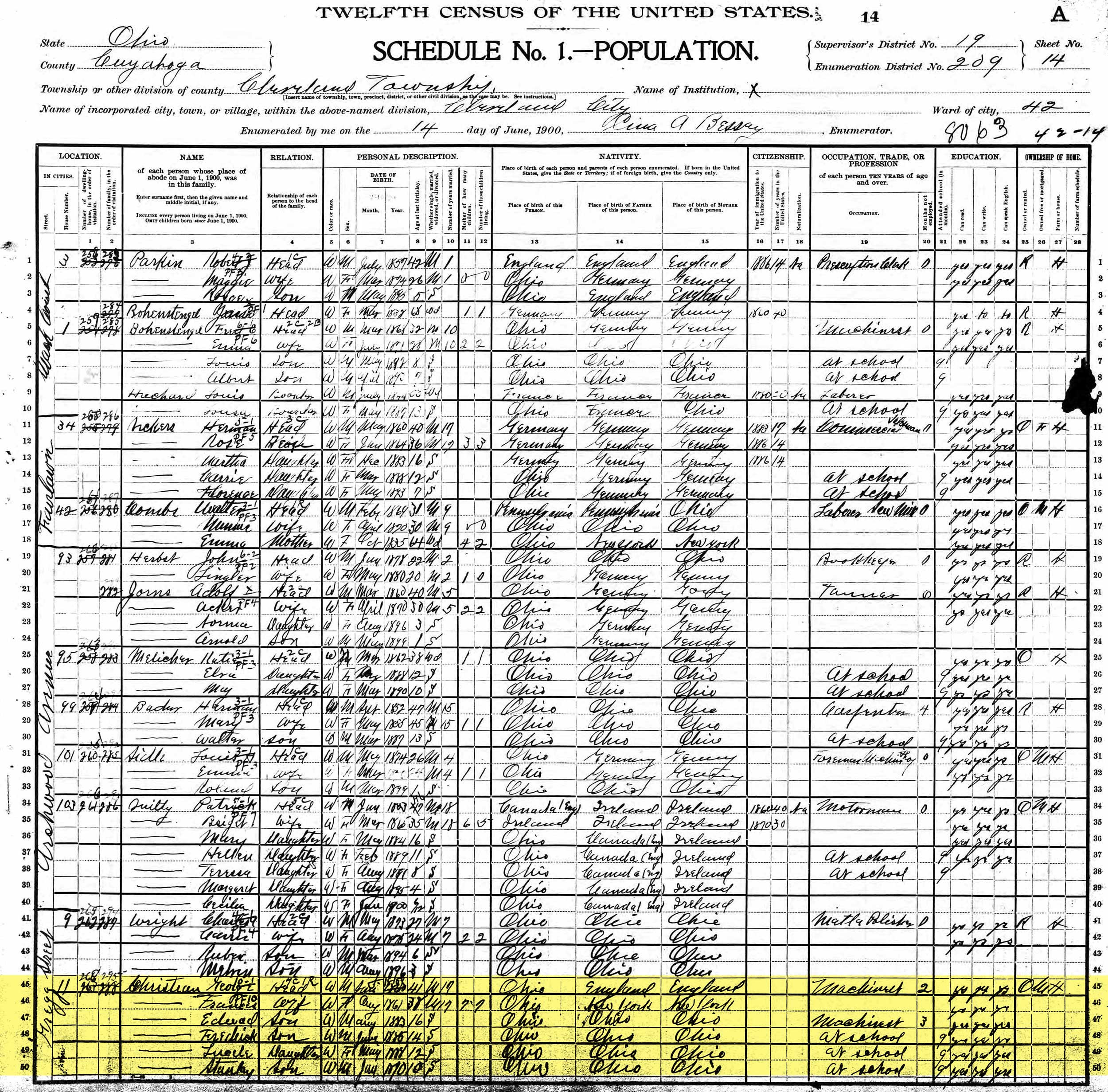 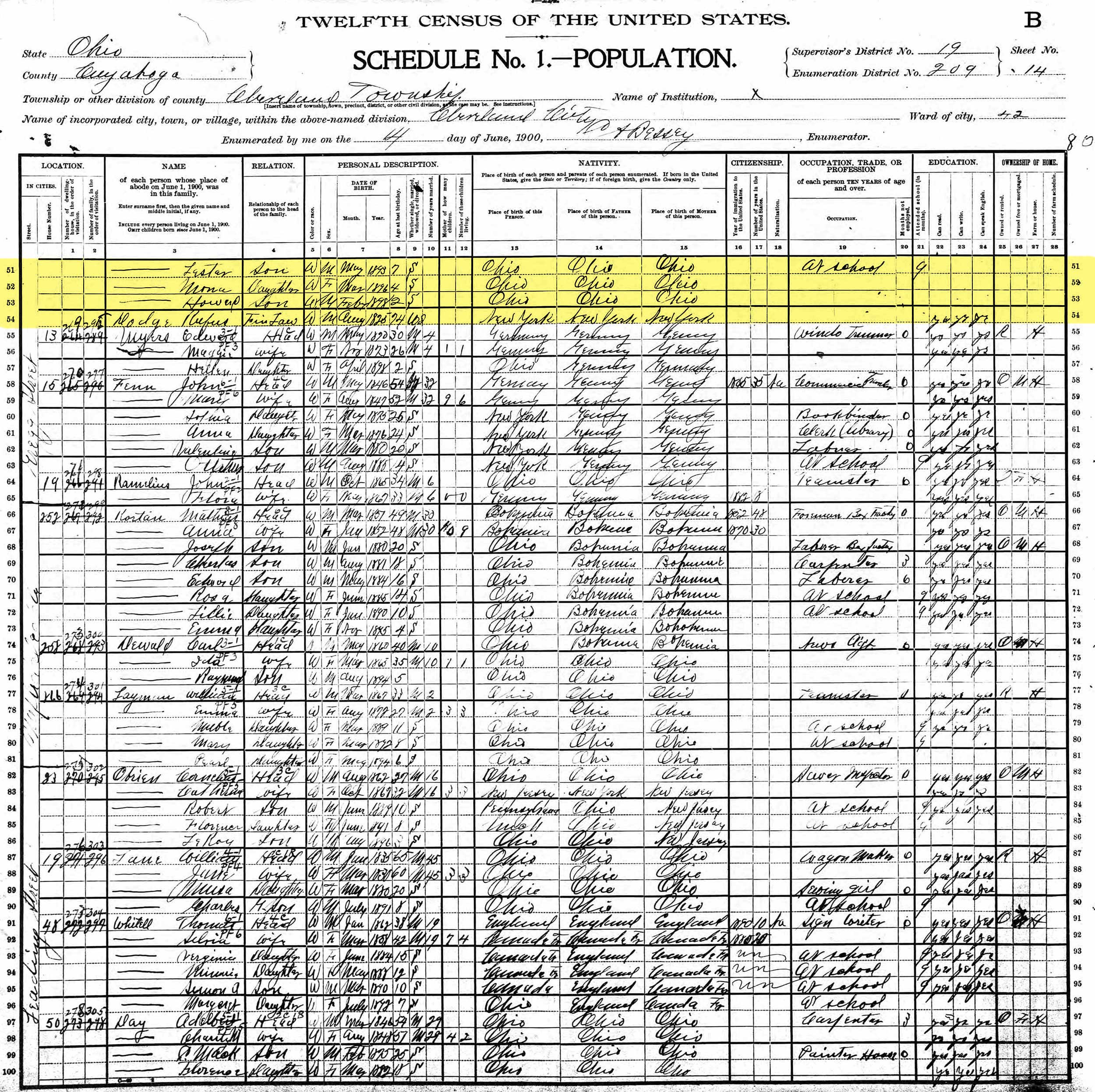 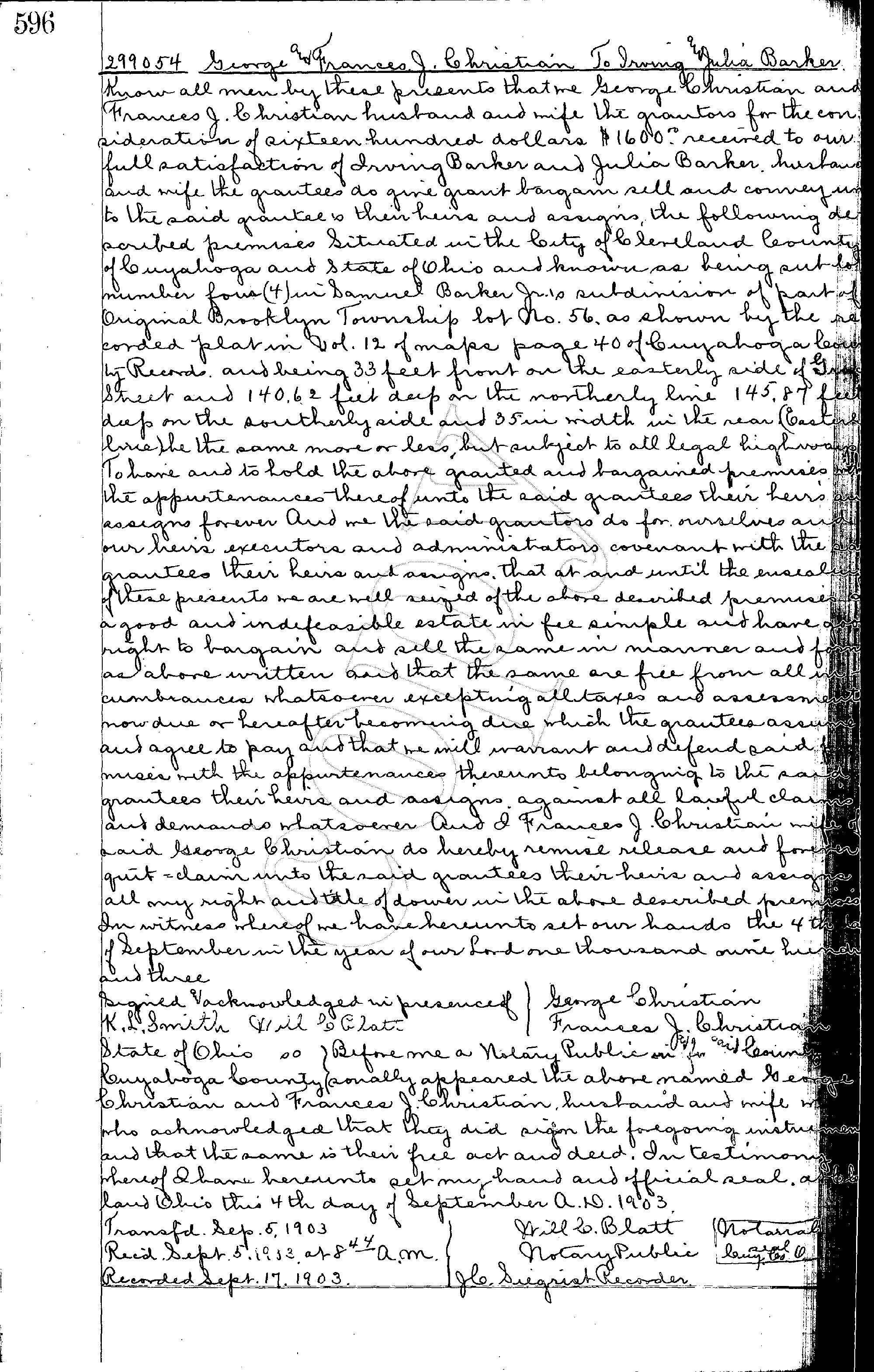 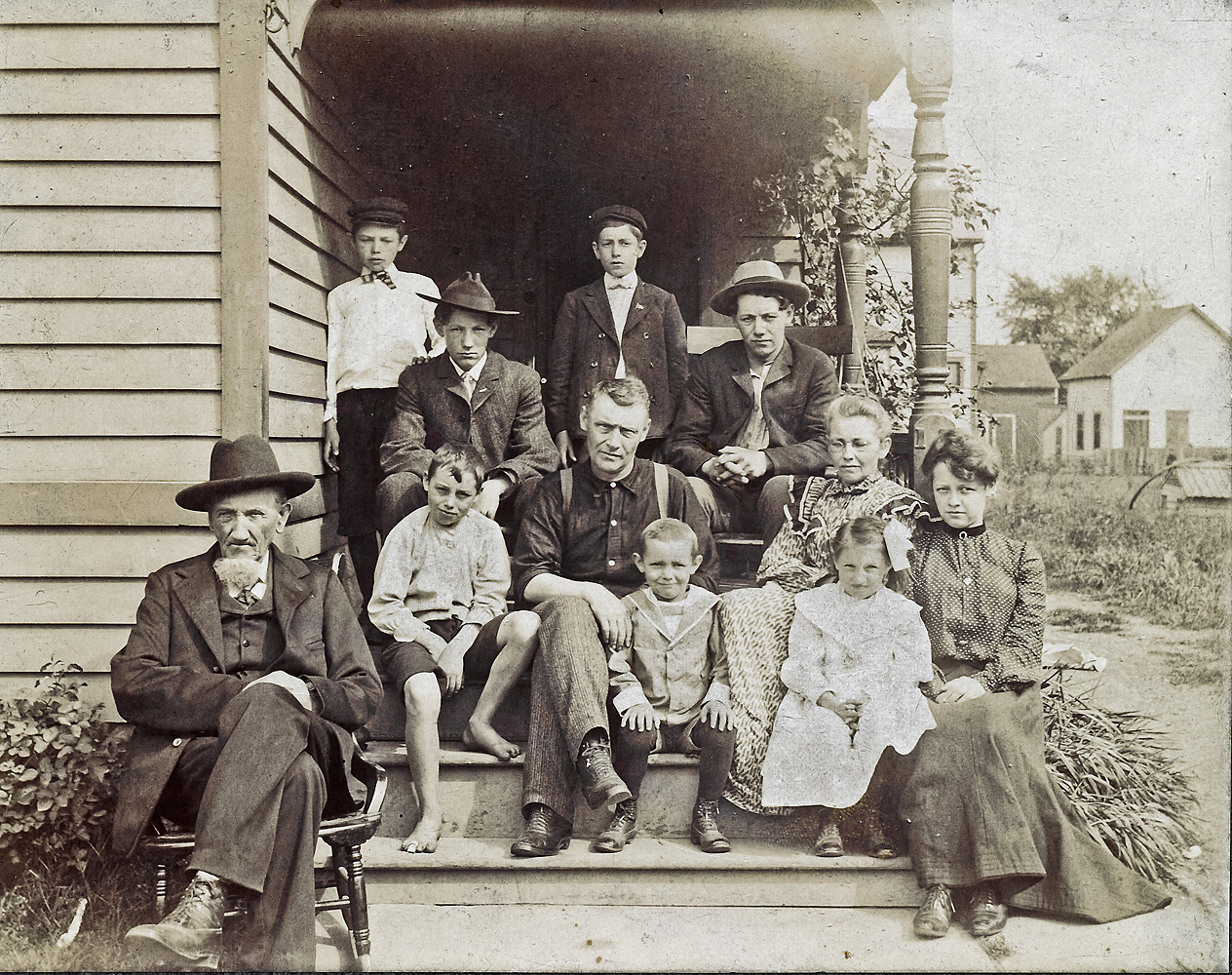 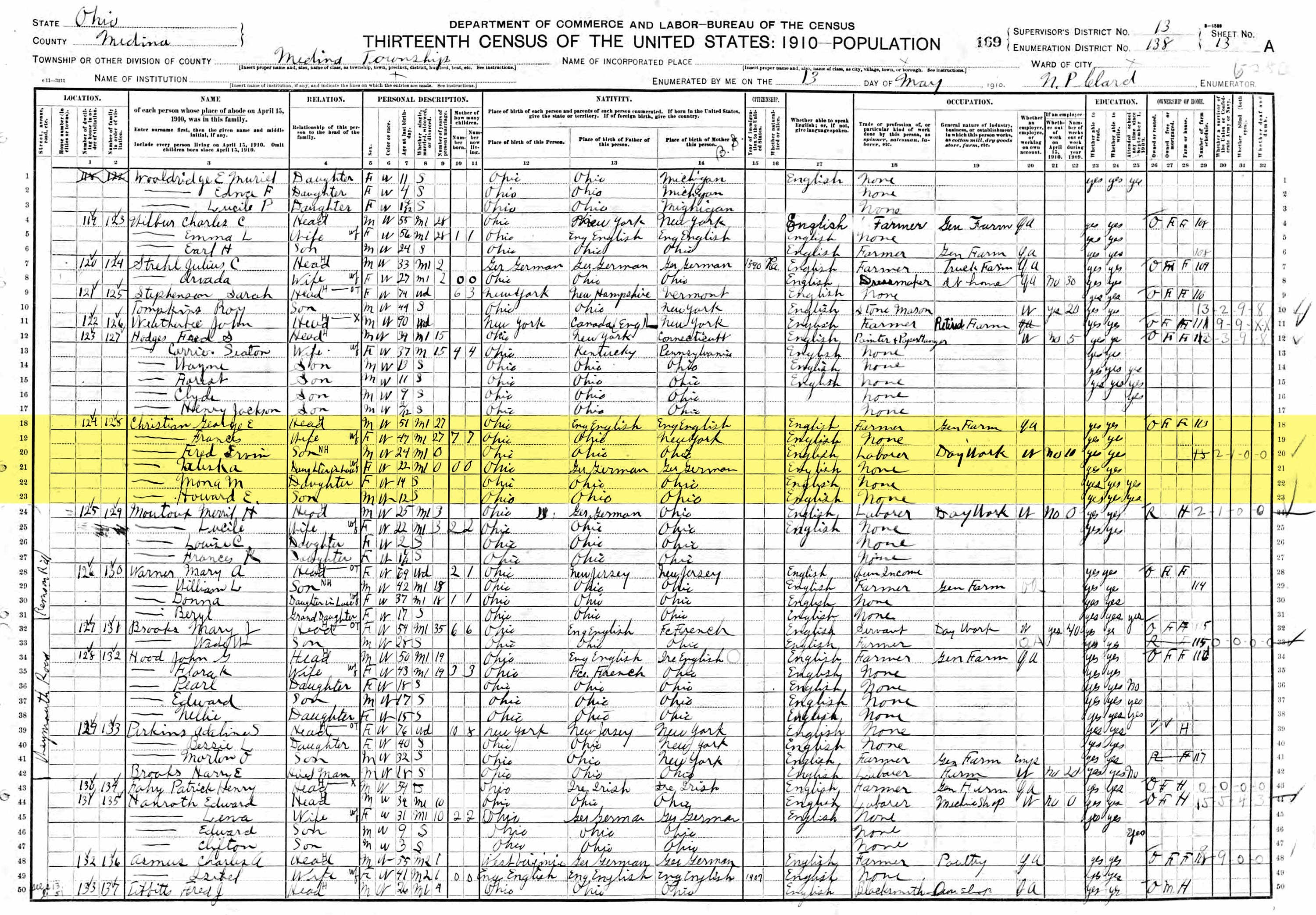 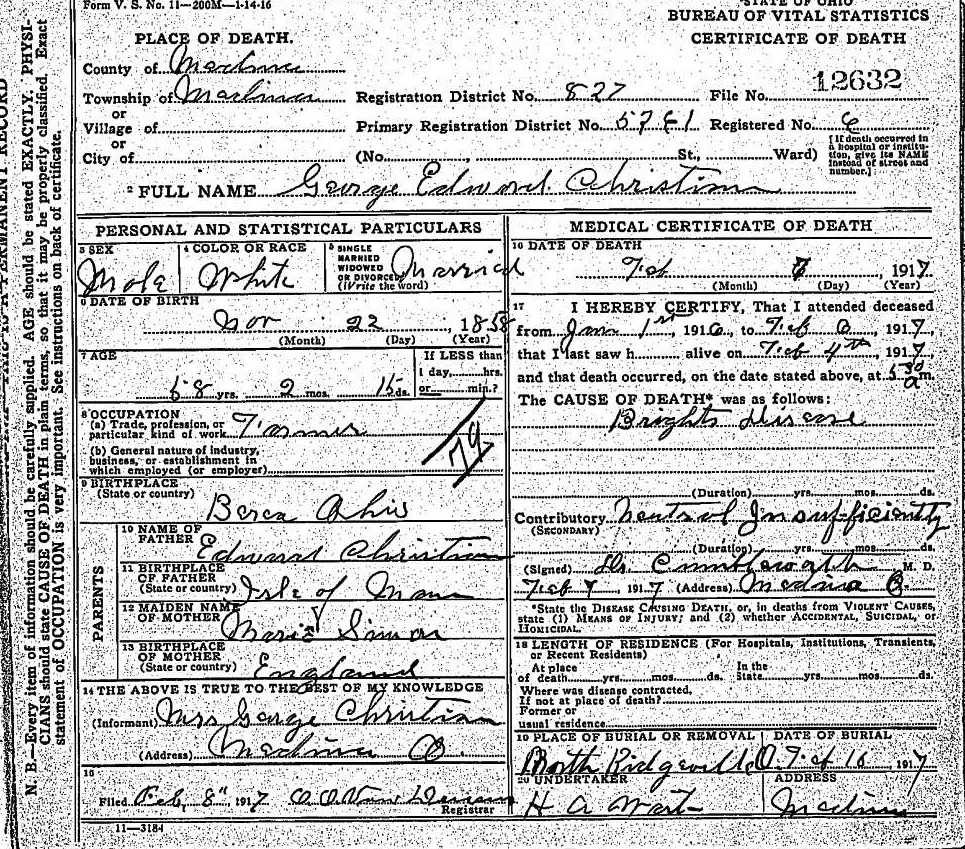 A I currently have nothing to confirm this by, but it's likely Merrill & Lucille moved out to Hinckley after George's passing. This window [1919] was the same time frame that wife Frankie and children Mona & Pete moved into the village (now city) of Medina.

B A machinist is to metal, what a woodcarver is to wood. They make and modify metal to make parts and tools.

C While I don't dispute the accuracy of George's time of death (there are enough sources confirming he almost died 24 hours to the minute of his father), there are things that seem "off" about his death record, which is just a complete mess. The coroner didn't even know what day it was and wrote the 6th instead of 7th before making the correction. George was confined to the house and cared for in his final days, but daughter Alice, who is interviewed for the coroner, claims to not have seen him after the 4th. And the biggest issue is that the undertaker signs off on removal of the body to North Ridgeville. I believe this was to head to Ridgeville Center Cemetery where wife Frankie's mother and grandmother were buried and where George had purchase a plot of land. However, George's final resting place is in Berea with his parents on a large family plot that was also was confirmed via multiple local newspapers noting the passing of both father and son at the time.

What was the reason for George and Frankie to move their family out to Medina?
Was the move to Medina related to a direct attempt to improve George's health?
Was his worsening health related to him working as a "machinist", thus switching to farming?
George was "confined to the house in his final days". At the same time, his father was confined to his bed after a fall on the ice that led to his death. Did George know of his father's condition and eventual death (I assume he was unable to visit)?
Why can't I find record of George's purchase of land in Medina County? I have George's deed of sale in Cleveland and 1910 census says he owned his home in Medina. I also have deed of sale from wife Frankie in 1919. How is this possible if no record of purchase or will to transfer ownership exists? 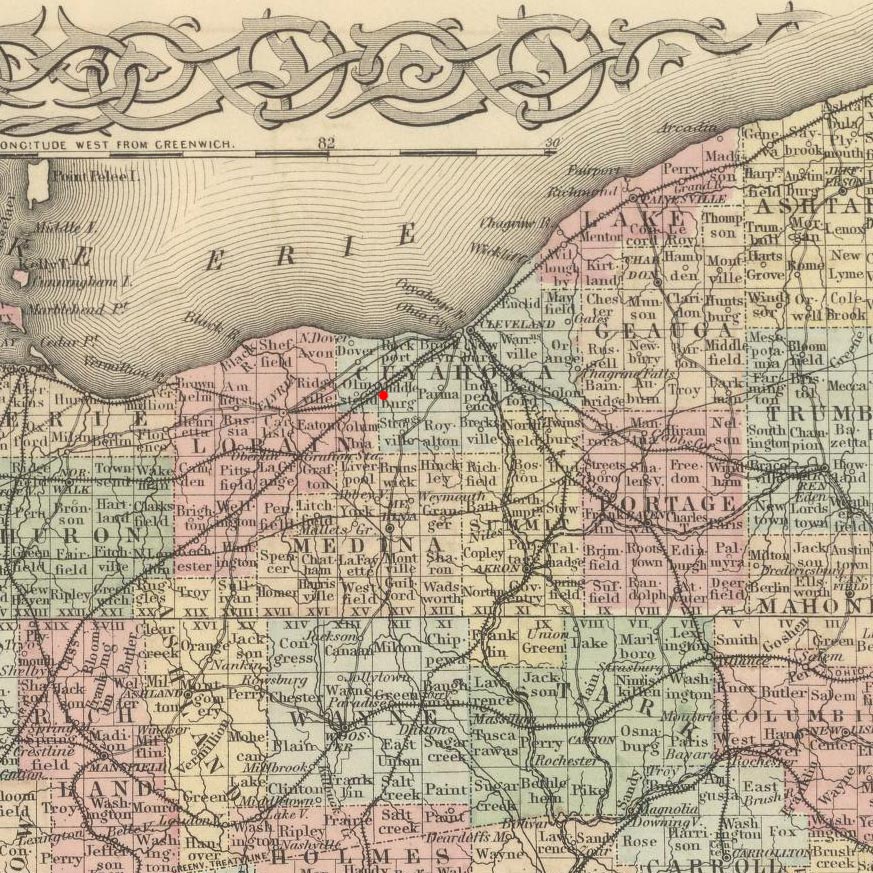 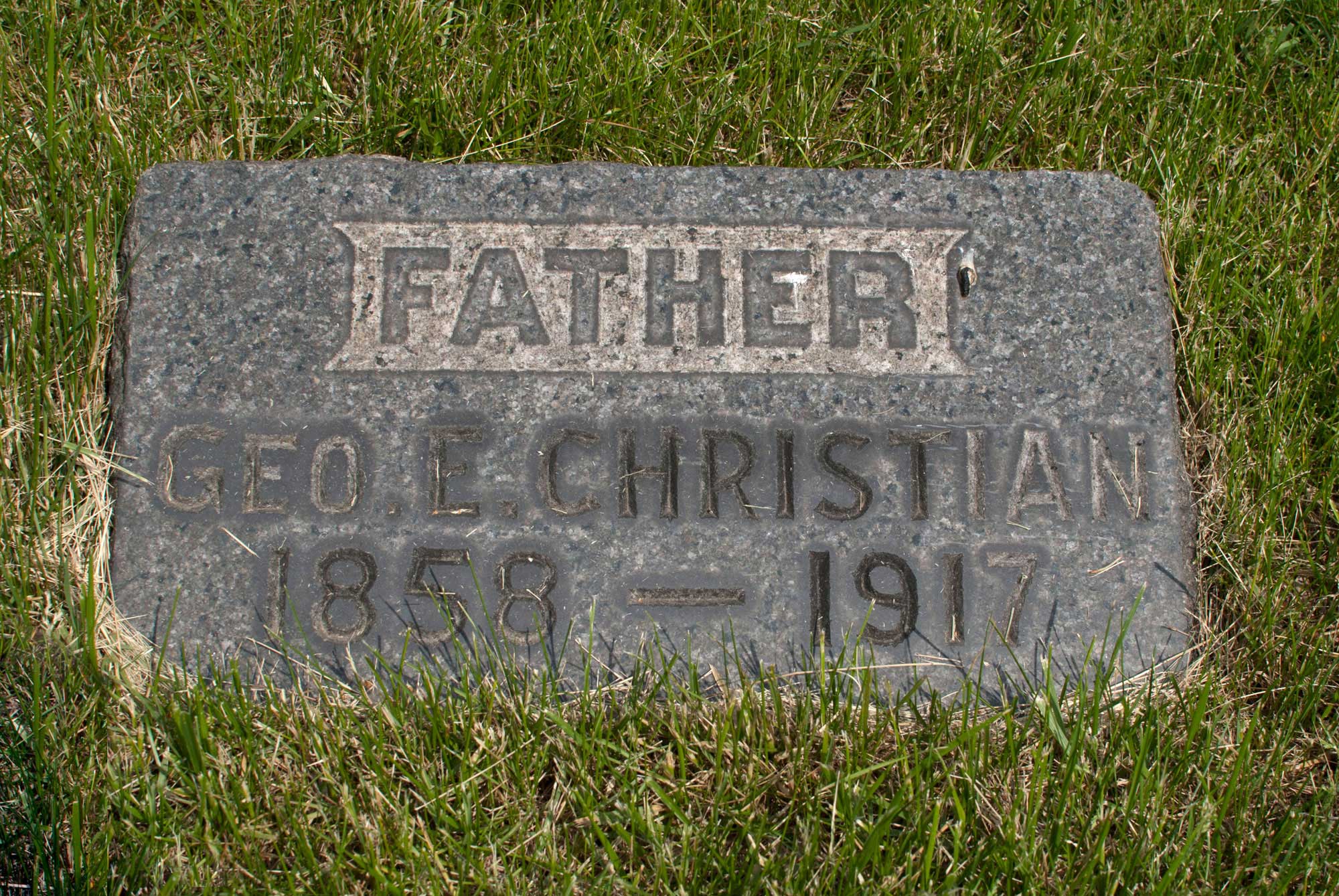 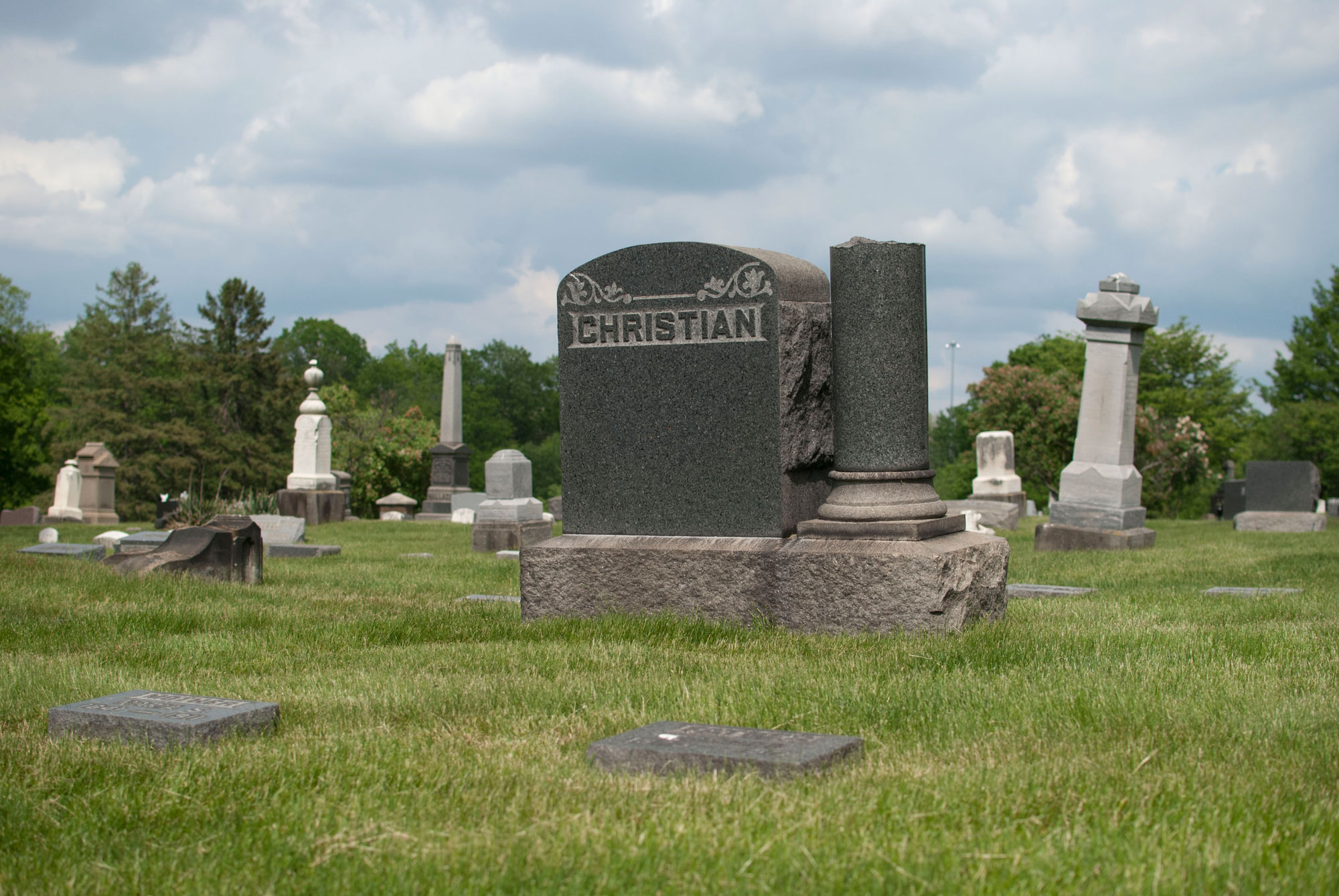