Baptism of Christian Alleman (1786)Christian Alleman was born in Middletown, Dauphin, Pennsylvania on the 11 Jun 17861 to parents John Alleman and Barbara Eshenauer; he was the 7th of 14 children.2, A

Christian was baptized at Saint Peter's Church in Middletown on 30 July 1786 where his sponsors were Christian Eshenauer (uncle) & Margaret Alleman (aunt).3

Christian grew up in the surrounding Middletown area in what was known as the township of Swatara. We believe he had a total of 13 siblings and many cousins in the area.

On the 22 Mar 1807 Christian Alleman married Sarah Heppick at the Zion German Lutheran Church in Harrisburg, not far from where he grew up in Middletown.5

Alleman-Heppick Marriage (1807)Shortly after their marriage, on 28 May 1807, their first child, daughter Magdalena was born. Her baptism would follow on the 14 Jun.6

We have record of Christian receiving communion at the Zion German Lutheran Church in Harrisburg in 1826.7 In 1831, Christian purchased property in Wayne Township, Wayne County, Ohio at section 18, partial quarter southwest and the family relocated to Wayne County. Not long after in 1833, son Christian Jr. married in Wayne County.8

The 1840 census places Christian in Wayne Township, Wayne County, Ohio neighbor to his daughter Barbara and son-in-law Jacob Winkler. The family is only living a few houses down from Christian's brother Leonard and his family. (Leonard was a Justice of the Peace in Wayne Country from 1840-1846).9

1850 Alleman Family CensusIn 1850, Christian is again living with his wife Sarah in Wayne Township, now a few houses down from Jacob and Barbara. This is most likely because new houses were built on farmland between the two families, not because one family moved.10

Both Christian and Sarah were buried at Lehman Cemetery on Canaan Center Road in Wayne Township (west of Madisonburg). Sometimes you will see it referred to as Salem Lutheran Cemetery.4, 11

NOTE: To those questioning the accuracy of Christian's parentage, not only have I provided my sources, but I also leave this: All information to contradict this claim comes from one record on Ancestry.com from the collection "Pennsylvania, Mennonite Vital Records, 1750-2014" stating that Christian is the son of Christopher Alleman and Elizabeth Schaffner. The problem with this is that this "record" is not a record at all, but a collection of others' research from the Lancaster Mennonite Historical Society. This states no sources and contradicts the vast majority of published Alleman family genealogy research including that of William Henry Egle from the Pennsylvania Archives in 1887 stating he is the son of John & Barbara. The final nails in the coffin of this argument should be not only that Christian came to Wayne Township and lived down the street from Leonard Alleman, also a son of John & Barbara (see 1840 census), but that Christian had a son named John and a daughter named Barbara after his parents and no children named Christopher or Elizabeth. He did not have any grandchildren named Christopher either. 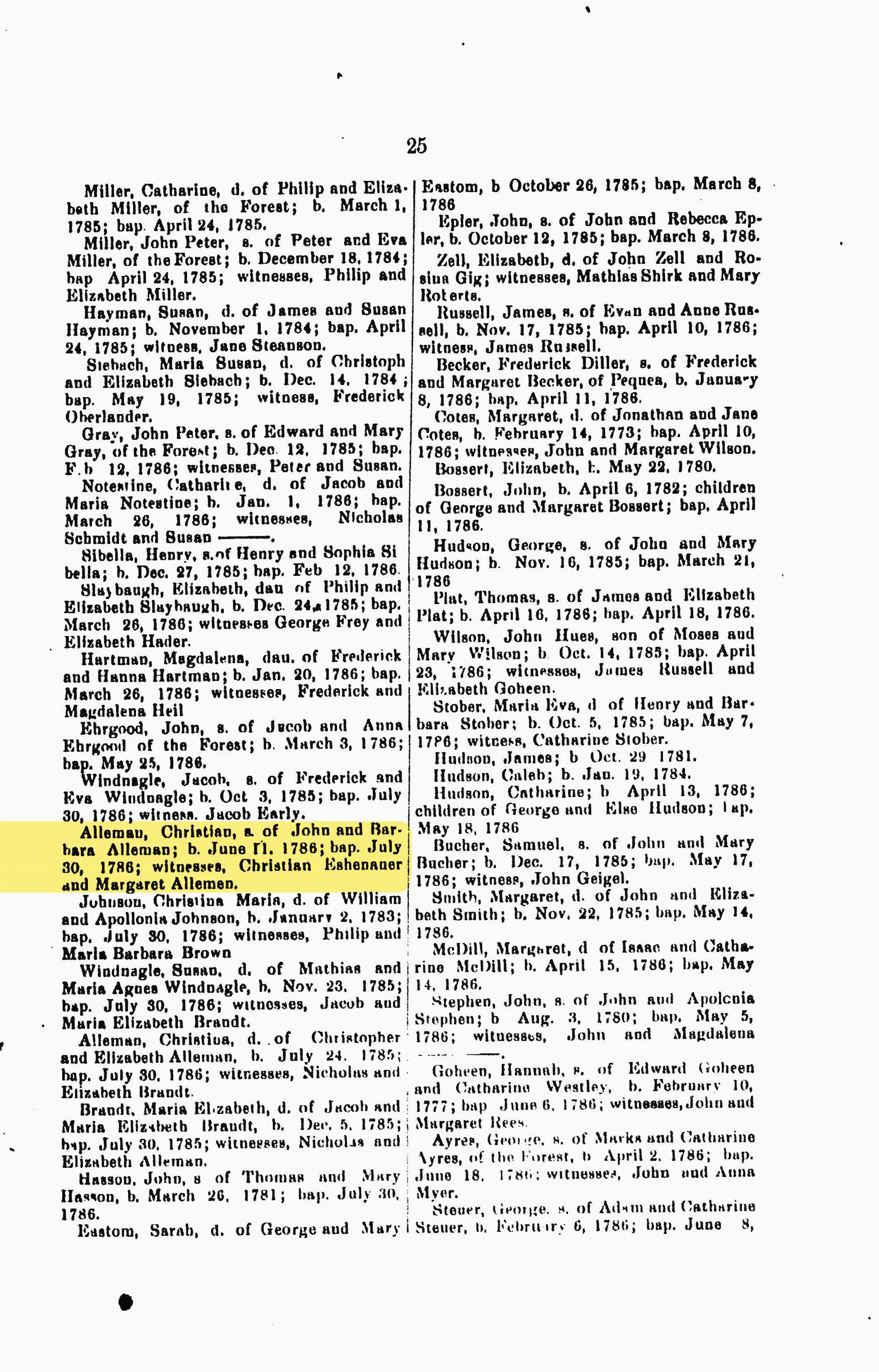 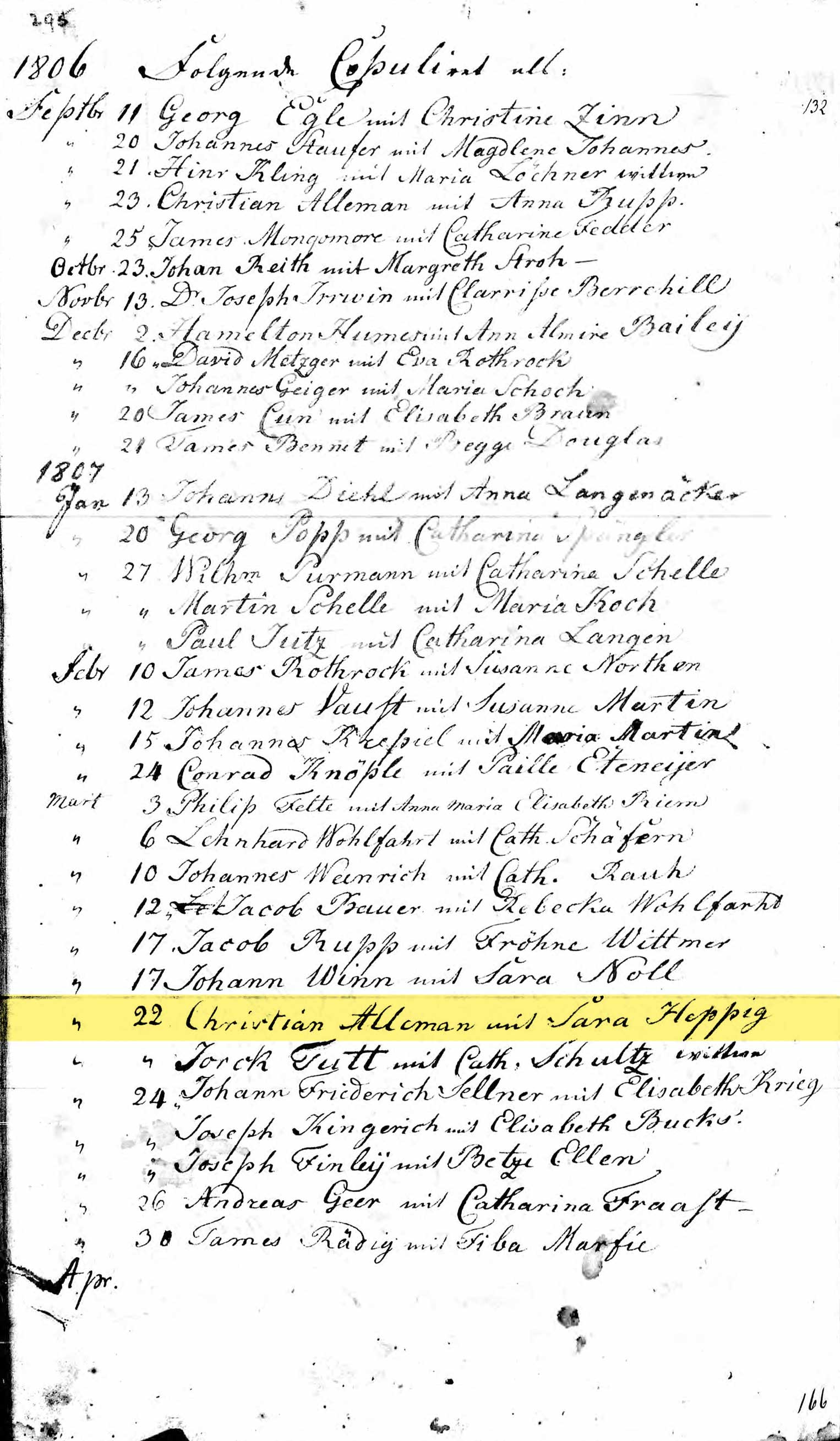 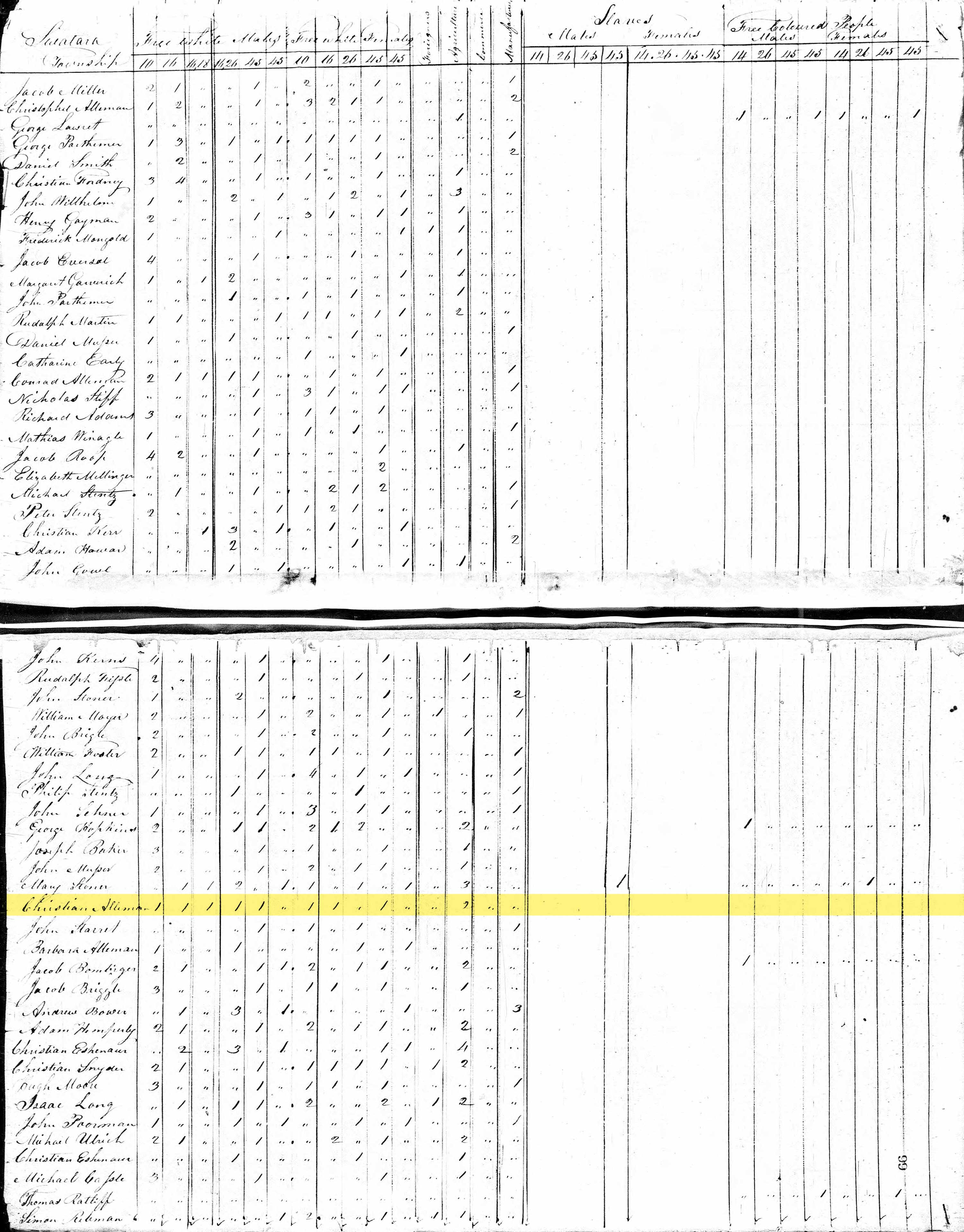 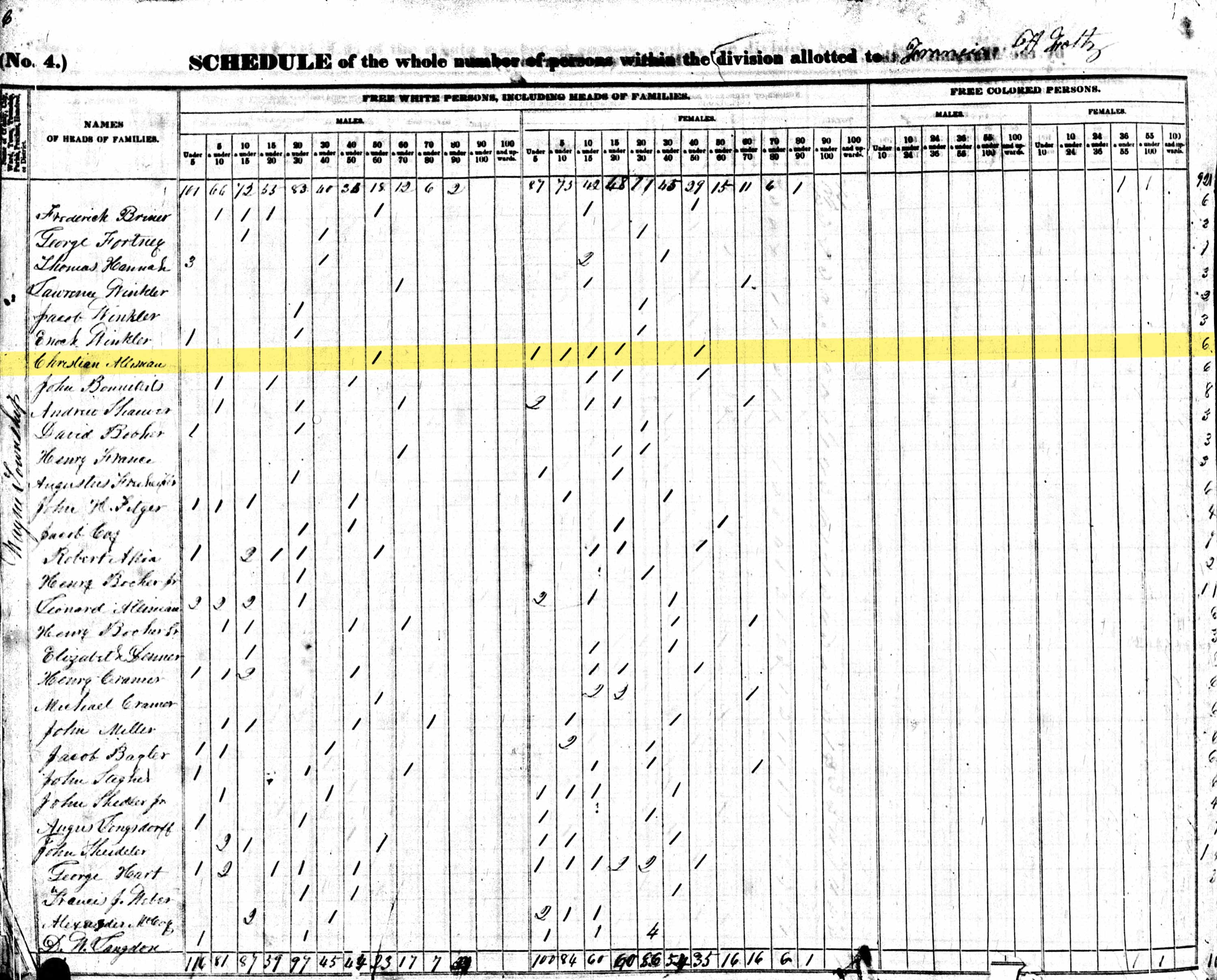 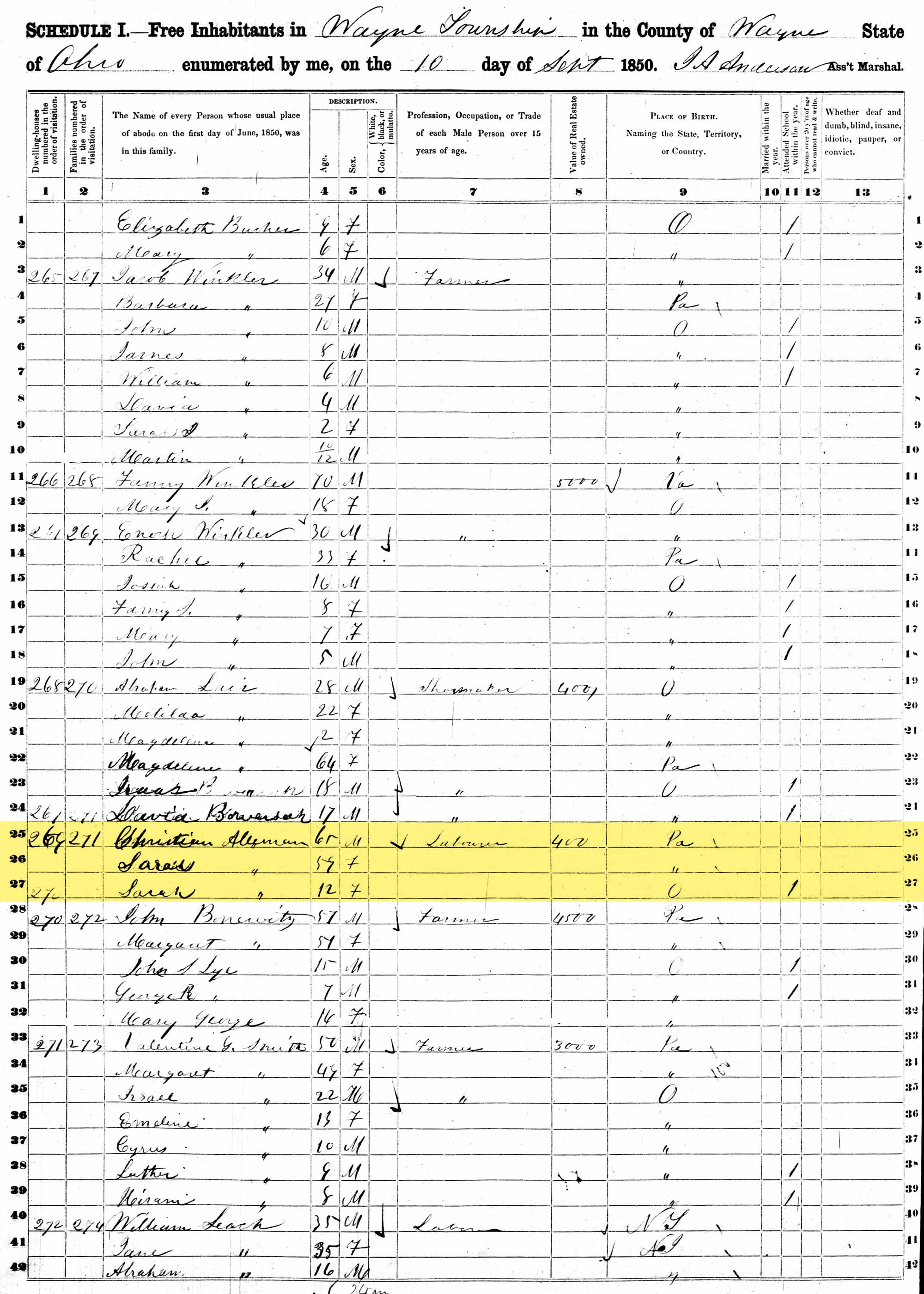 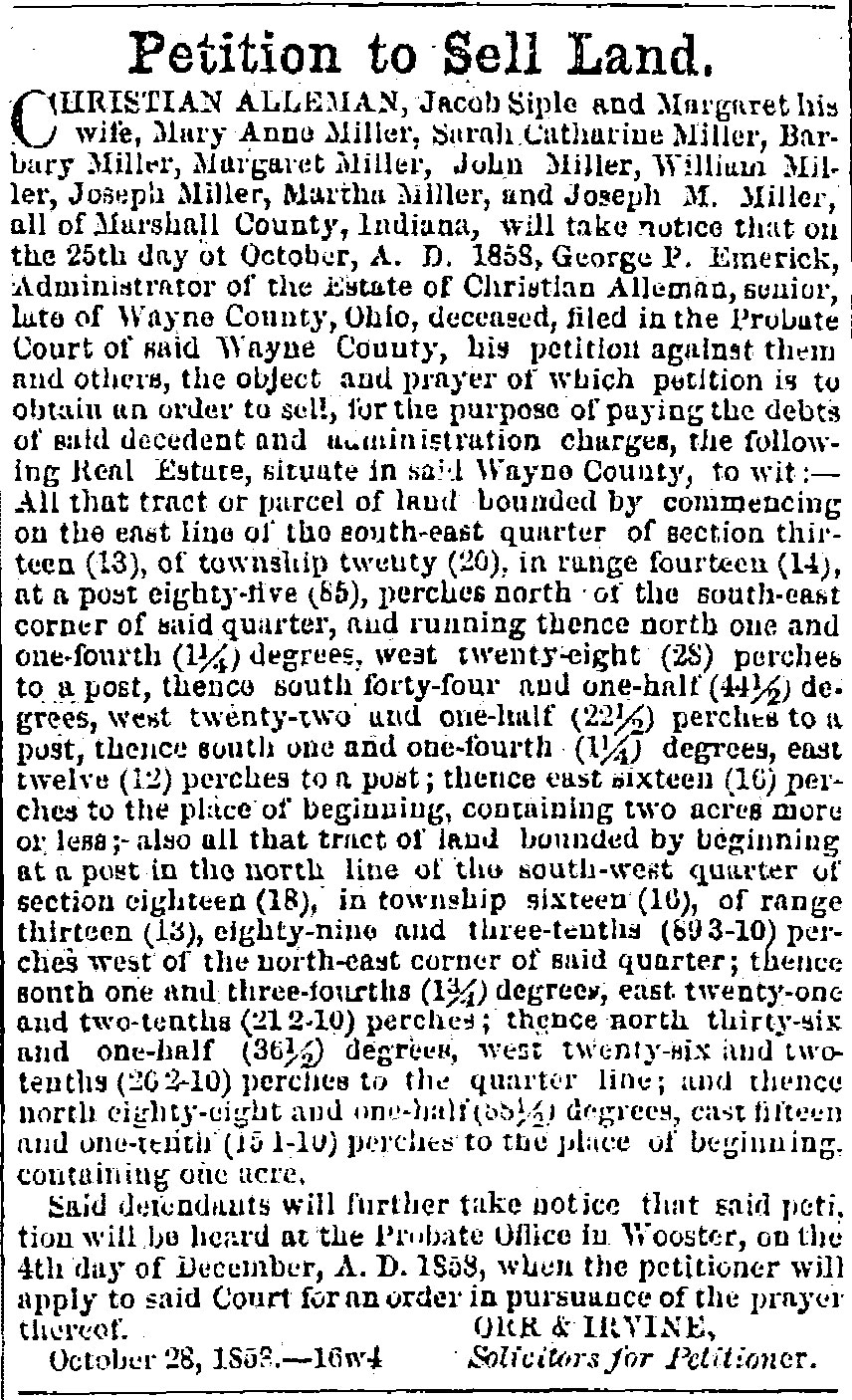 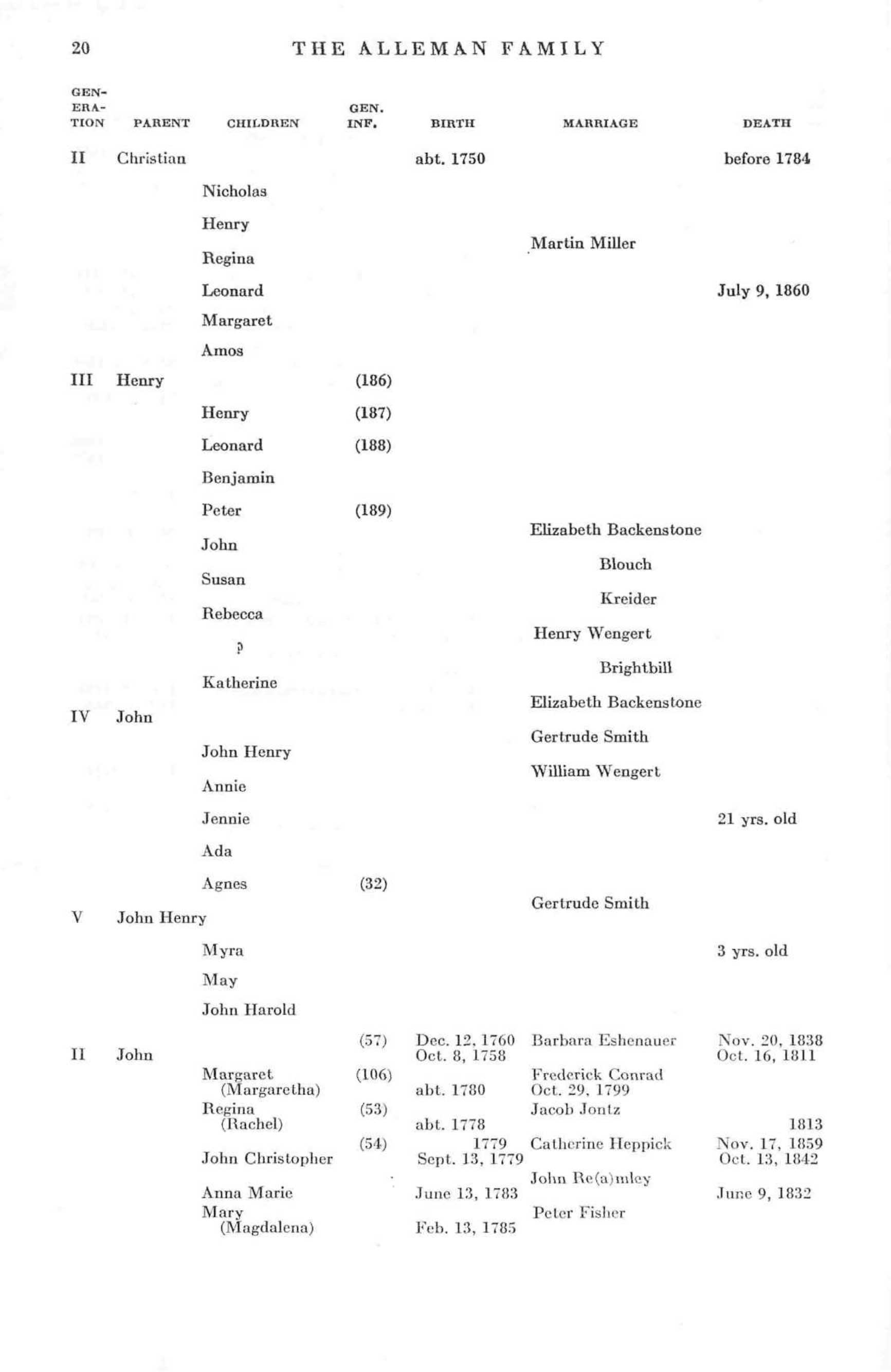 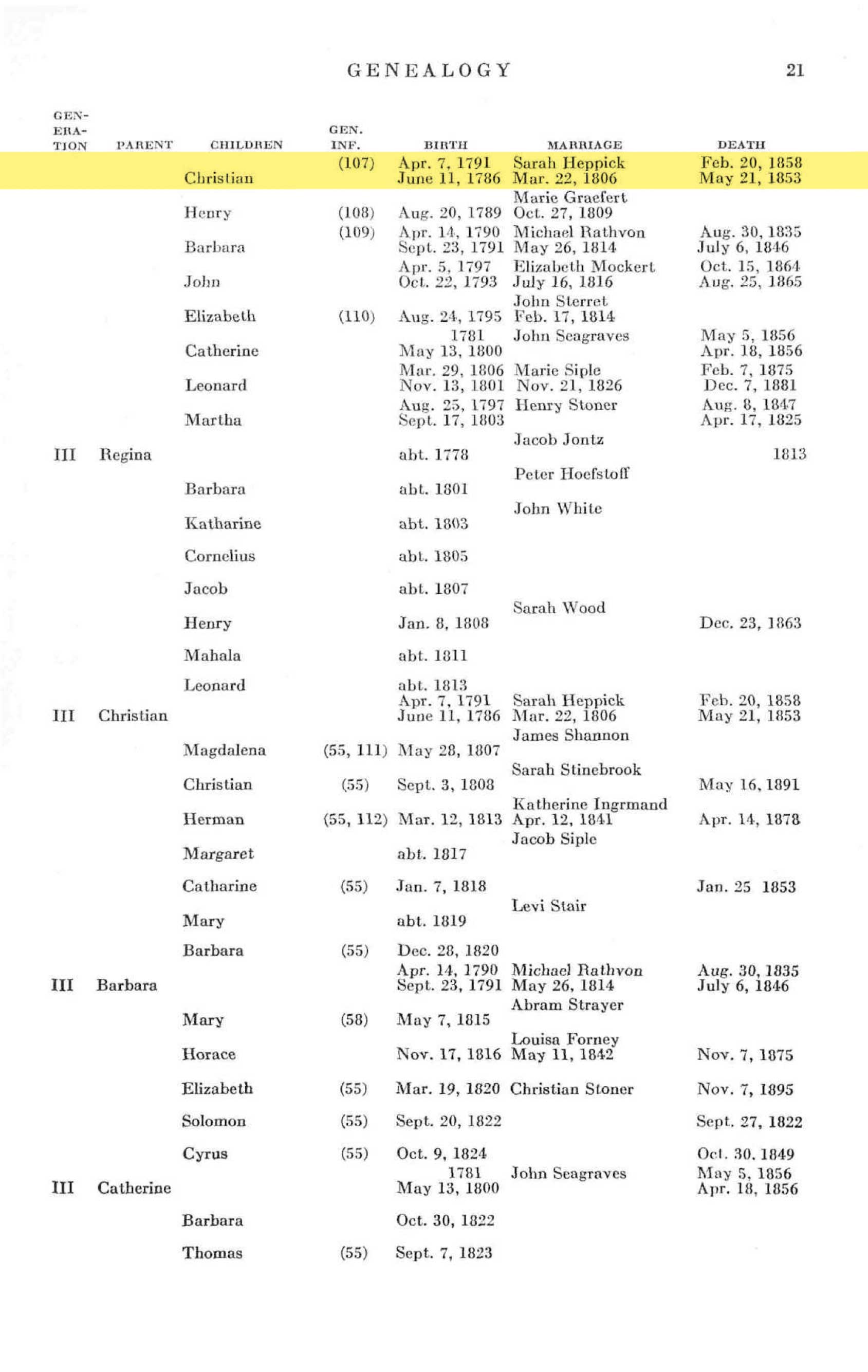 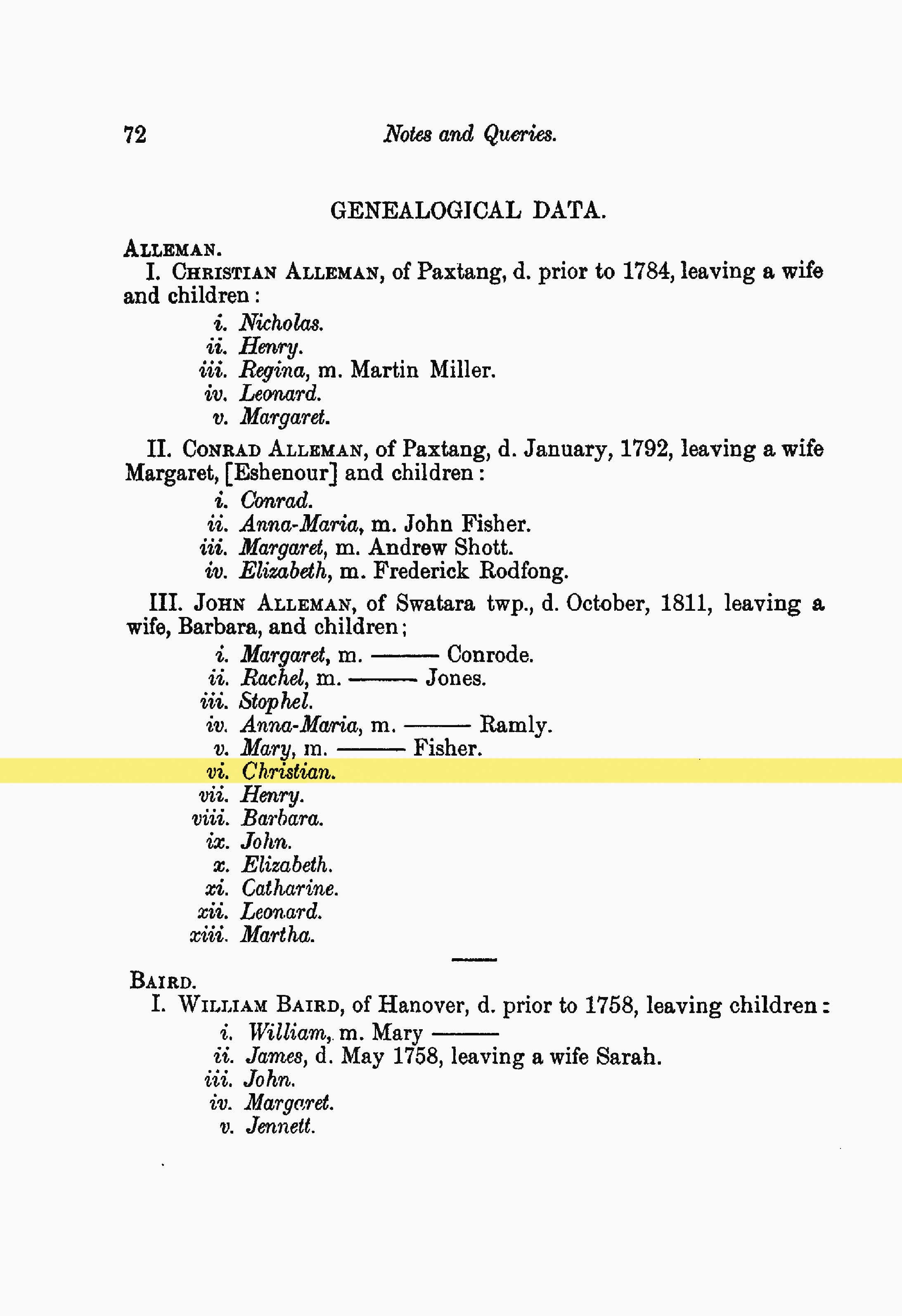 A The county of Dauphin didn't exist until 1785, when it was created (along with 5 other counties) from a massive Lancaster county that made up a large portion of the state. This change wasn't immediately adopted and some records were slow to change, which is why you may find some records stating Christian was from Middletown in Lancaster County.

C In 1825 the construction of the National Road (America's first highway) reached Ohio. This made the trek across Pennsylvania to Ohio much easier and saw a handful of Pennsylvania ancestors arrive in Ohio around this time. The Alleman's in particular arrived anywhere between 1826 and son Christian's marriage in 1833.

D I have been unable to substantiate the claims via the GLO, but common belief is Christian's father John received land in Ohio for his service as a soldier in the Revolutionary War and that led the charge west for the Alleman children into Ohio. 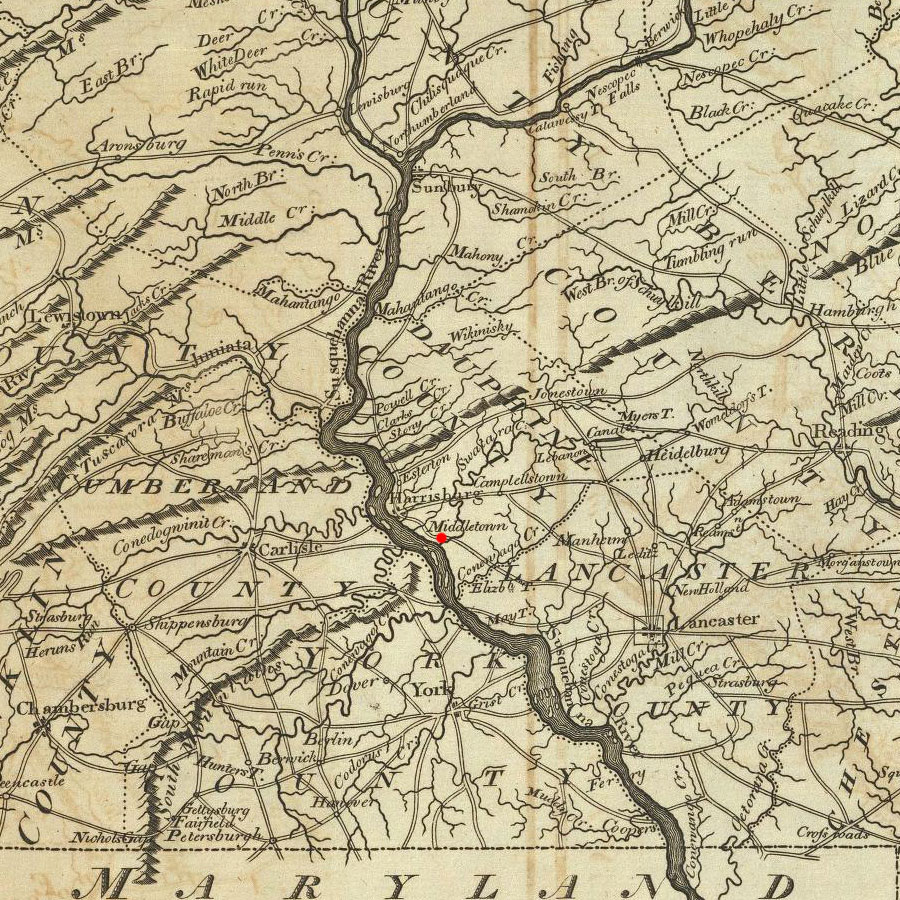 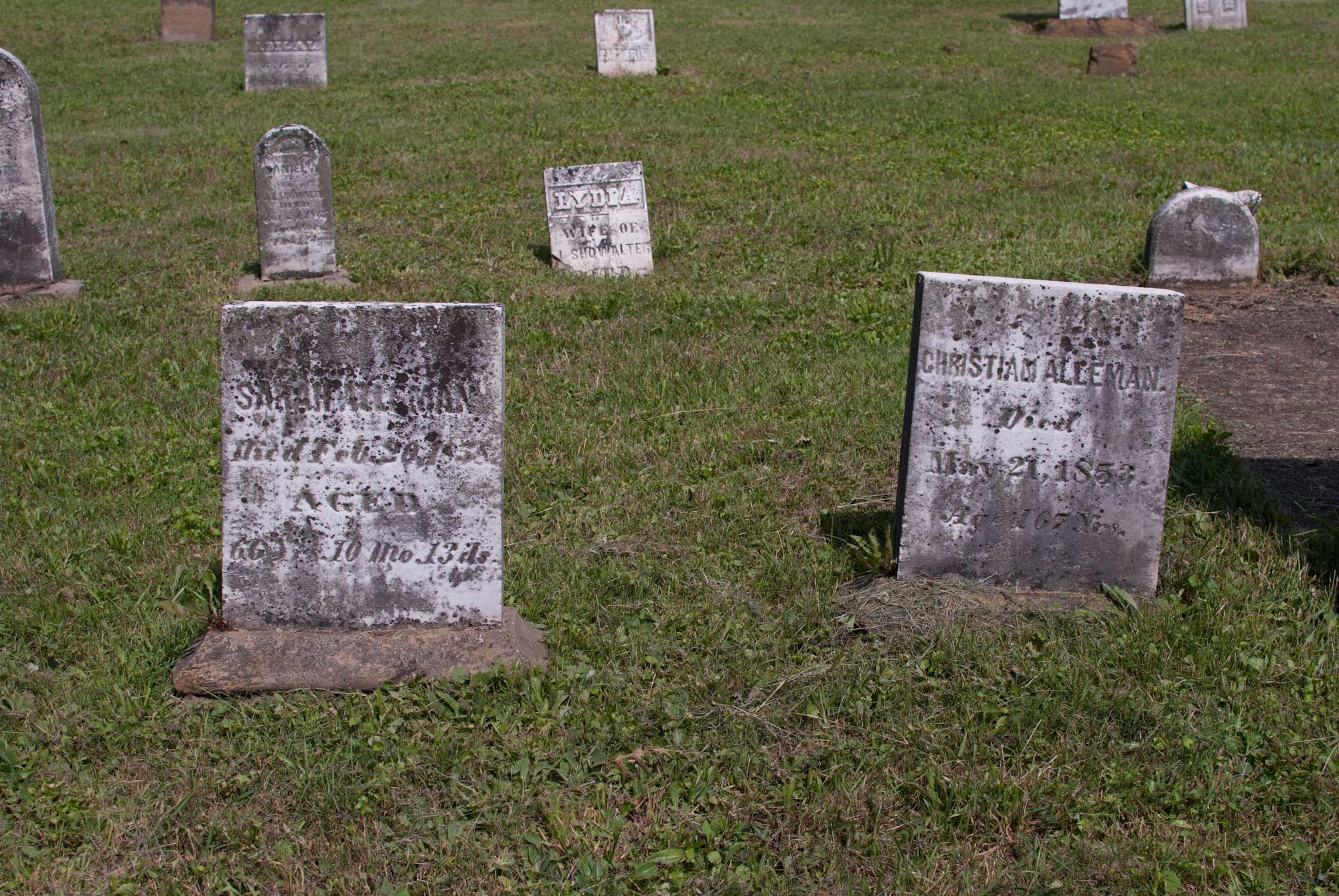