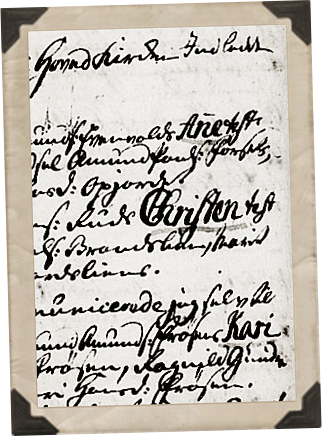 In the final days of 1775 Christen's mother Marit passed away from complications while giving birth to twins. She was only 36. Her daughter Marit was born without issue, but the other twin never made it. Without a mother, daughter Marit had the deck stacked against her and only survived until late April.

A year and a half after the loss of his wife, On 20 May 1777, Christen's father Ole remarries Anne Larsdatter Voldslien. [The need to find a spouse to help raise his children (now 4, 7, 10, 15 and 17) must have been necessary with only 15 year old daughter Kari to stand in as a mother figure]

The couple would go on to add 9 step-siblings to Christen's family, only 1 of whom we know passed away during childhood. That's a total of 12 siblings we believe made it to adulthood. Only step-brothers Johan '78 and Iver '81 were born before Christen married and was known to have left the family farm.

After their marriage, Christen made his residence at his in-laws' Østerlie Farm in Østre Gausdal. His first child, a daughter Mari, was born at Østerlie on 1 Feb 1783. A second daughter, Marthe, would follow there in 1786.

Why Christen, being the oldest son, chose not to stay at Ruud farm with his family is unknown (and something we will likely never know for sure). We can speculate that it was related to not wanting to be a farmer and searching for work cause after spending a few years under his inlaws' farm, he moved again to Nordre Kjos Farm in Østre Gausdal where his daughter Berthe was born in 1789.

It's likely that Christen moved the family south (about 80km/50mi) to Næs in Hedmark from Østre Gausdal in search of work in early 1791. The exact reason for the relocation is unknown, but it seems the island of Helgøya may have offered work in a local limestone quarry and we assume that this drew Christen to the area.

The family had just moved to Røråssen FarmA and welcomed son Ole in 1791, but soon encountered an endless string of problems farming the land. The 1790s were plagued with issues. Multiple years of an uncanny amount of pestilence led to sequential seasons of failed crops and famine across the region, and in the middle of all of it, the family welcomed another daughter, Anne, in 1793.

Early in 1795, to survive, the now family of seven took a hit and sold Røråssen farm for 1150 riksdaler, far less than the 1699 Christen purchased it for four years prior.B It's likely that they heard stories of southern Norway not being hit as severely by the famine or that the prospects of living on the water provided more opportunities for jobs and food. Either way, the family relocated again. This time their new residence was in Hurum in the county of Buskerud.

Christen found a job at Glassverket, the local glassworks, over the next three years. It was its own little community of 21 families in company housing located along the east side of the Svelvikstrømmen fjord, opposite the villages of Svelvik and Strømmen.C During normal production, Christen worked with roughly 12 other day laborers to assist 10 glassblowers in making glass bottles.

In 1797 Christen & Ingebor welcomed a son Amund, but appear to have lost him the following year while they were visiting Svelvik on the other side of the river.

Following Ingebor's death, Christen realized that his 5 children who were between the ages of 6-16 needed a mother. However, in order to move forward with any potential marriage, he would have to settle his wife's probate and her debts in court, providing him legal clearance to remarry.

Christen did this on 2 Apr 1799. Court records state that Ingebor left a debt of 41 Riksdaler & 65 shillings to Michelsen at the glassworks. To pay this debt he would have had to sell everything. It's noted Michelsen gave a credit on the debt to somewhat ease the problem.D

In the months following, Christen became close with Anne Mathea Olsdatter, a woman from the town of Svelvik on the opposite shoreline of the Svelvikstrommen. On 30 Dec 1799, Christen remarried in Stromm Church in Svelvik.

Shortly after the marriage, Christen officially left his job at the glassworks and the Ruud family relocated to the town of Svelvik along the opposite shoreline of the fjord. It made sense as his new wife had lived in the town her whole life, and outside of the glassworks community, everything was across the river on the opposite shoreline. A farmer would be more self-sustaining away from a town, but a general laborer like Christen would see the seaside village a better place for sustained work.

Svelvik would be Christen's final stop. Ultimately, Christen's journey south from his birth at the Ruud farm in Østre Gausdal (north of Lillehammer), to Svelvik (south of Oslo) would total a distance of 260 km [or 160 mi].

We can see the family living in Svelvik on the 1801 census (written as Svelvigen #2): Christen Olsen Ruud 48, a day laborer on his 2nd marriage, is living in house #8 with his wife Anne Mathea 30, and children Marthe 14, Anne 7, and Ole 9. Daughter Berthe 12, is working as a nanny a few doors down at neighbor Friderich Hanlen Kock's house #14.E

In what was likely a move to recover some money and/or finish paying his wife's debts, Christen Olsen Ruud sold the allodial rights (wholly owned property, free from any kind of feudal overlord) to the family farm in Østre Gausdal to for 299 Riksdaler in 1802.

This is the last we hear of Christen's adventures. He spent the rest of his life in Svelvik doing seasonal work and odd jobs around town. In what seems to be an exception to the majority of these family stories in Norway, Christen's father Ole lived to the age of 86 and died at Ruud farm in Østre Gausdal.

* The standard practice was a child would be born in the days/weeks prior to their baptism. It was rare to see this window extend beyond 3 months.

A The Nes Farm book notes that Røråsen as it originally existed is no more. It was originally its own farm immediately south of Lodvika/Lovigen (north of the tree line and due west of Kleven Nordre) here are those coordinates: 60.741436, 11.000773. Røråsen seems to have originally been farm Gnr. #28 now a part of Gnr. #651 and known as Hagen og Røråsen. The farm sits on the island of Helgøya on the eastern end, just west of Kjelsrud Farm. (Nes was its own municipality until it was merged into Ringsaker in 1964), at that point the farm numbers [Gnr.] under Nes were relabeled, so as not to interfere with those of the same number in Ringsaker, which causes some confusion.)

B Christen's agreement to purchase Røråsen also included paying "føderåd" for two people. Føderåd was essentially old Norway's version of retirement that functions more like child support. You would sell your farm or property and in turn the purchasing individual would agree to a regular fee to support you.

C Worn & weathered pieces of glass can still be found washed up along the beach in Hurum.

E Eldest daughter Mari appears as though she did not move with the family and can be found staying in Østre Gausdal with her mother's parents Amund & Mari on the 1801 census...she would have been 7 when the family left Gausdal.

F At the time of Christen's death in Svelvik, the parish priest stated that he was 90 years old. This is inaccurate. Christen was actually 78. I have combed the records to verify that this was indeed an error, and as a matter of fact, this error is a huge reason it took me so long to conclusively find the right Christen. The most likely reason for the error is 1. Keeping track of your age didn't matter nearly as much as it does today, and 2. Christen's parish baptism records and the priests who could reference them for accuracy were hours away and may as well have been across an ocean making the accuracy we normally see impossible (hours away is being generous and assumes you have a car to drive the distance... this would have been weeks to travel in their time).