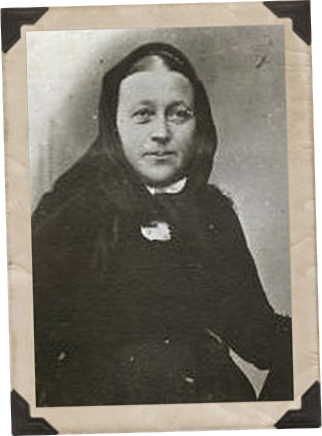 Ane Christensdatter was born on 29 May 1842 in Ersted, Aarestrup, Denmark (Hornum District of Aalborg) to parents Christen Jensen Ræbild and his 2nd wife Maren Nielsdatter. Ane was baptized in Aarestrup Church on 4 Sep 1842 to godparents Rasmus Andersen & Christen Pedersen Tved of Ersted, Soren Pedersen Ræbild, Niels Krebsen & Elsa Justesdatter of Aarestrup. (both Soren and Elsa were neighbors to the Ræbild family)

The following 19 July 1843, Ane was vaccinated against smallpox.

On the 01 February 1845, Ane, now 4, was documented on her first census. She was living at Aardestrup Bye #62 with parents Christen Ræbild 52 & Maren Jensdatter 35, and siblings Lars 18, Niels 16, Niels 9 & Peder 7, and houseworker Ane Christensdatter 18 (daughter of Christen Pedersen Tved) (A common theme is daughters would leave home sometime after confirmation and become employed as a maid or houseworker of some kind at one of their godparents' homes. This Ane [Tved] was the goddaughter of our Ane's father Christen Ræbild).

Ane was raised in Aarestrup Bye on farm 3 where we find her in 1850. She lived with her parents Christen & Maren, siblings Niels, Peder, & Karen and half-siblings Ane Margrethe, Jens, Lars & Niels. (Ane also had half-siblings Karen Marie (died age 2), Mette, & Peder. Mette was adopted and raised by Mauritz Larsen however, I have not been able to verify if Peder survived out of childhood.)

In 1851, just under 2 weeks before Ane's 9th birthday, her mother Maren passes away and leaves Christen without a wife, and Ane without a mother. It seems that Christen felt losing 2 wives was enough, and never seems to remarry. It appears that this put the responsibility of raising and mothering the remaining children on the shoulders of eldest daughter Ane Margrethe, now 27 years old. By 1855, the family is living on Aardestrup farm #5. Christen, widowed and 62, is working the farm with help from his son Lars, 28, and daughters Ane Margrethe, 31, Ane, 14, and Karen, 8.

Three things changed in 1856. First, on 23 Feb Ane Margrethe married and moved out of the house. Second, on the 31 Mar, Ane was confirmed in Aarestrup at the age of 13 and legally became of age to work. And finally, on the 4 Apr, Lars married Mariane Sorensdatter.

At this point, Lars became the man of the house and soon took over ownership of the farm, with his father and sisters living under their roof.

Ane soon left the house and started working as a housemaid, which is where we find her on the 1860 census. Ane is listed as 19 yrs old and is working as a housemaid in Ersted for Rasmus Andersen and his wife Ane Pedersdatter; Rasmus was Ane's godfather and primary sponsor on her baptism record.

On 12 Jan 1864 Ane's first child, Caroline Marie Mortensen is brought into the world. She was baptized on the 25 March of that year in the Aarestrup Church. Ane is mentioned as being a lodger with Thomas Otte of Stubberup.

In 1865, while no date is listed, a marriage is mentioned for Fredrik Eriksen, 36, of Ersted, to spinster Ane Christensdatter, 22 years old (vaccination date confirms this to be our Ane). Ane is mentioned to be living with farmer Maurits Larson of Stubberup. Maruits Larson also witnesses to the marriage. Maurits was godfather to almost all the Ræbild children and adopted Ane's sister Mette after their mother died. The problem with this record arises in the details: while I can't decipher the notation, I can see that only 2 weeks of announcements were documented on the marriage. For a marriage to take place, by law, the upcoming marriage would need to be announced in church and recorded for 3 weeks in a row. This was to give the community as a whole notice to produce legal reasons to dispute the marriage if need be (i.e. already married/not properly divorced, close relatives, etc.) Did the couple call it off or could it be that someone actually brought up a legitimate reason not to wed the couple? (This can still be seen in modern weddings even though announcements are no longer law "Any reason these two shall not be wed, speak now or forever hold your peace".)

(An interesting fact: per the 1860 census, both Thomas Otte and Maurtis Larsen were neighbors on opposite sides of Ane's brother Niels Christensen Raebild in Stubberup)

Not that long after, in early 1866, an Ane appears in the church records again. But this time, things get even muddier. We have a marriage to Henrik Christian [Corneliusen?]. Again no date is listed for the marriage, but everything was written down, including the weekly engagement announcements and the best men. Ane is again noted as living with Thomas Otte of Stubberup, however, the problem with this is the vaccination date listed is related to a different Ane (supposedly the daughter of a Christen Danielsen & Ane Johanne Jensdatter) and no where near the correct date. [While confusing, it is possible Thomas Otte took in the other Ane Christensen after our Ane leaves... both girls did live near each other.]

(Thomas Sørensen Otte was a clog maker from Hals, Denmark, born about 1808, married to Else Nielsdatter and lived in Stubberup house 83)

While Ane's location cannot be confirmed on the 1870 census, it appears she may have either been a houseworker for Niels Jensen Beum and his family, or a lodger with Anders Jensen Kjær and his wife Ane Christensdatter. Both families lived doors apart in Ersted.

On 24 May 1871, Ane marries Peder Neilsen Munkholm in Aarestrup Church. Here Ane is stated as being a widow, confirming Ane's previous marriage. Both are listed as living in Ersted and witnesses were Lars Christensen Raebild of Aarestrup & Andreas Pedersen of Stubberup.

In 1880, at 37, Ane and husband Peder Nielsen, 33, are living with their 3 children Ane Katrine, 8, Niels Christian, 5, & Maren Nielsen, 3, at Ersted By #20, while daughter Caroline Marie is nearby working as a maid on Ersted farm 2 for Erik Christensen & Marie Henriksdatter.

Ane and husband Peder Munkholm are caring for Ane's daughter Caroline Marie's children Petra and Villiam on the 1890 census along with their own daughter Maren at Ersted house 22, #142.

Based on recovered records, daughter Ane Kathrine immigrates to Chicago, Illionis, USA in 1892, son Niels follows in 1894 and daughter Caroline Marie immigrates with her children in 1899. This seems to have driven Ane and Peder to immigrate as well. It appears that the couple moved across the country to Esbjerg along the southwest coast of Denmark and took up residence in the port town while Peder made the final arrangements for their travel.

Peder and Ane traveled from Esbjerg to Liverpool, England in what was likely early September 1901. They would have normally disembarked their ship and sought temporary residence in some form of hotel for a few nights while they likely acquired passage for the final leg of their trip. From there they boarded the S.S. Germanic on the 18 Sep 1901. The ship sailed for 9 days and on the 27 Sep 1901 arrived in America. As the couple made their way through Ellis Island, Peder states that their last residence was in Esbjerg and they are on their way to Chicago, Illinois to stay with their daughter Ane Kathrine and her husband John Glambeck.

The Munkholms didn’t stay in Chicago long, because two years later in 1904, Racine county court records place Peder Nielsen Munkholm (as H.P. Nelson) and son Niels Christian Nielsen (as N.C. Nielsen) as witnesses for John Edward Greishauge in Racine, Wisconsin where he is naturalized and granted citizenship. These documents are dated between 30 Oct 1900 and 12 Jul 1904.

The Munkholms are listed in Mount Pleasant, Racine, Wisconsin on the 1905 Wisconsin State Census. Here they are living with their son Niels and granddaughter Petra Mortensen (who has taken the Greeshauge name.)

In 1906, son Niels decided to relocate to Alberta, Canada. Around that time Peder and Ane, and their daughter and son-in-law John Glambeck decided to follow Niels. The family originally set down in the area of Queenstown, Alberta and farmed the land there (likely renting), but were looking for land of their own.

If you were a naturalized citizen of Canada you were able to apply for free land via a homestead application, so Peder, Niels, and John Glambeck did just that: applied for Canadian citizenship.

Once Peder became a naturalized citizen of Canada on 28 Sep 1908, he applied for a plot of land to call his own. The process consisted of Peder identifying a piece of land and starting the homestead application process for that property. He then began to cultivate and improve the land as the application was being processed. He would then build a house on the land and live there and continue to improve the property.

Over the next year or two Peder's neighbors would be interviewed where they were required to confirm their relationship with him, his occupation of the land for the specified period and verify his improvement of the said land.

It took Peder a total of 4 years to complete the homestead application process and receive his deed to the land, but sadly during that time period, Ane passed away.

Ane died on the 20 Jun 1909 near Milo, Alberta, Canada. At the time she was living on son-in-law John Glambeck's farm, which neighbored the land Peder was cultivating to the southwest. Ane never got to see Peder complete their house as she died a month before Peder moved in, in mid July.

As said, Peder completed the process and received his land, yet, without his wife, didn't feel compelled to stick around. Belief is that Peder decided to leave Canada and return to Denmark and lived out the rest of his days there before he passed away in 1927. He left his plot of land to son-in-law John Glambeck who became a very prominent farmer in Alberta. 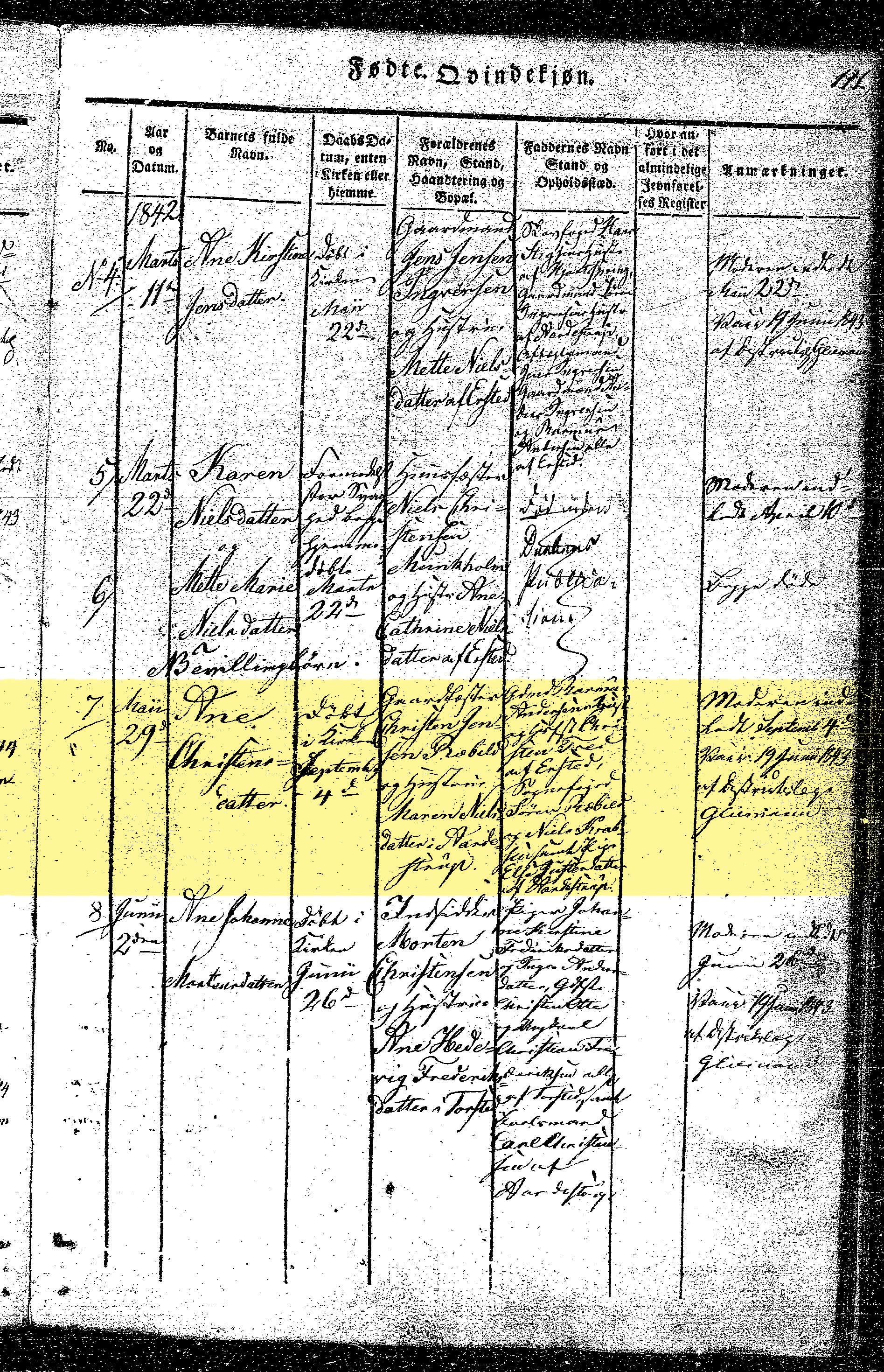 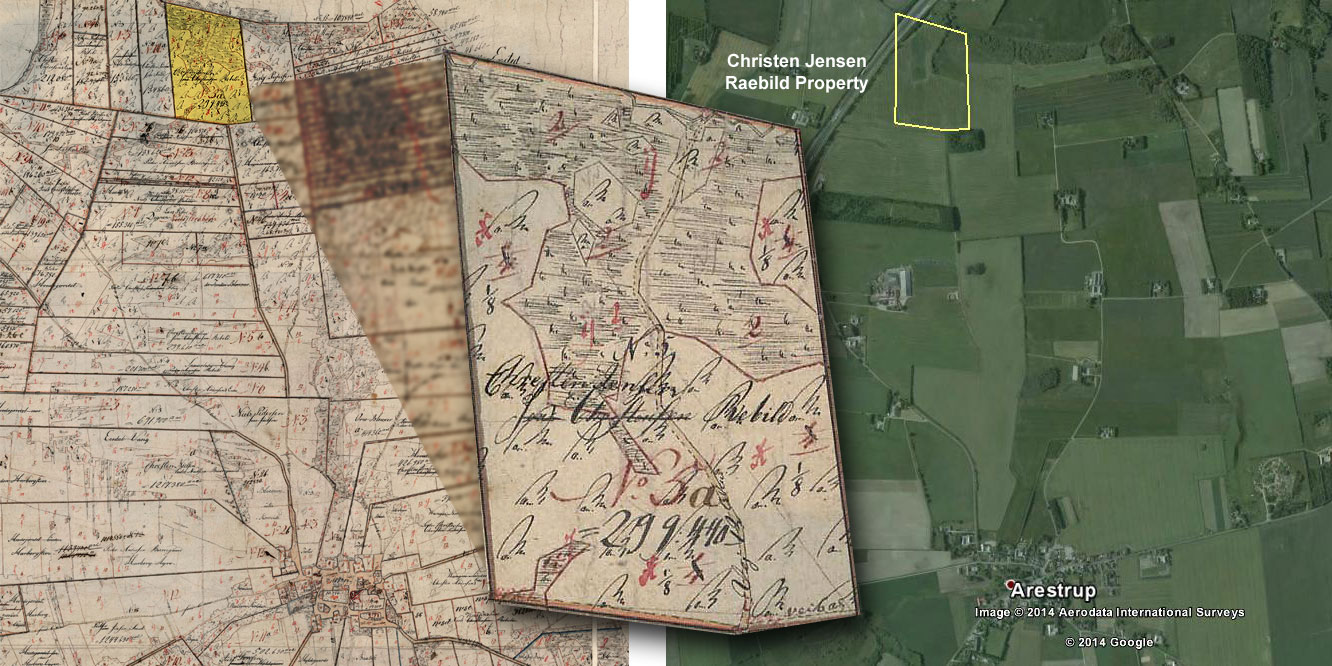 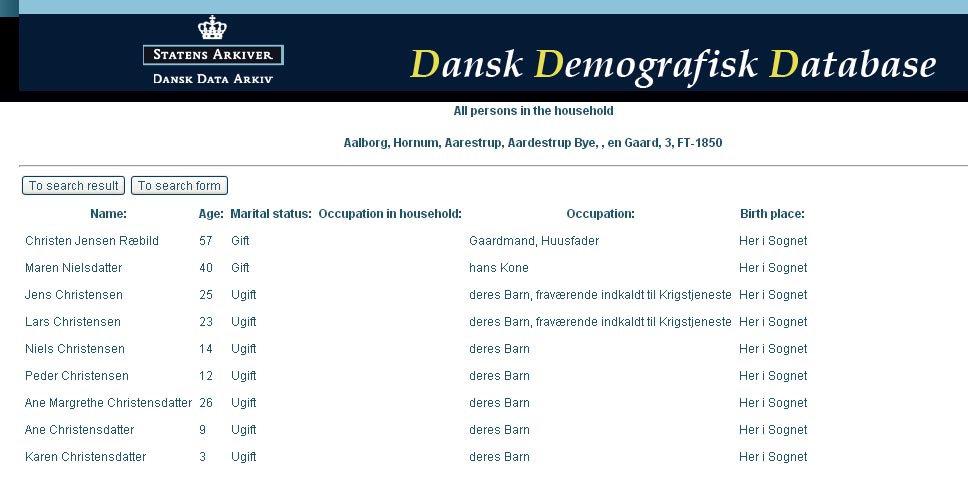 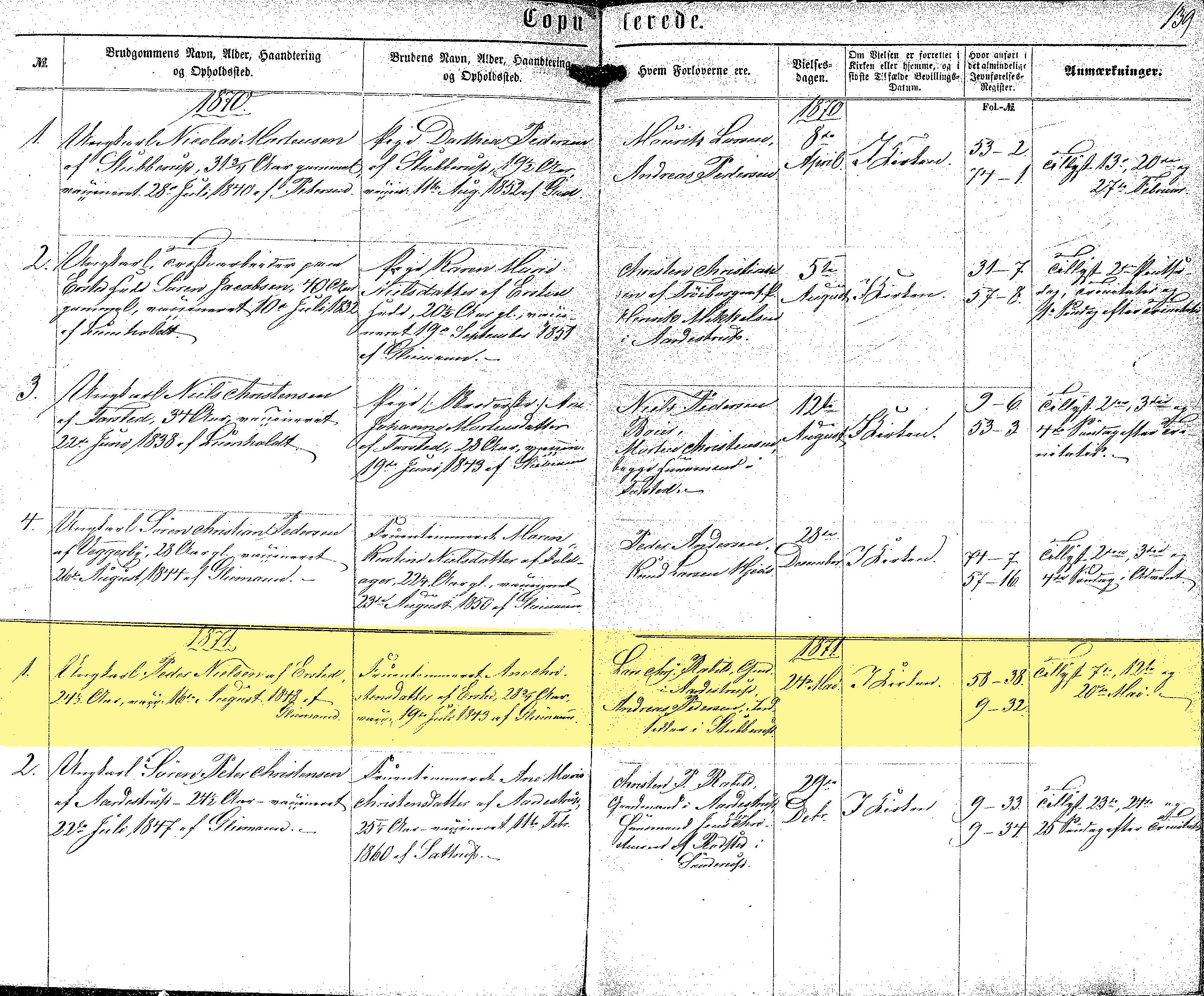 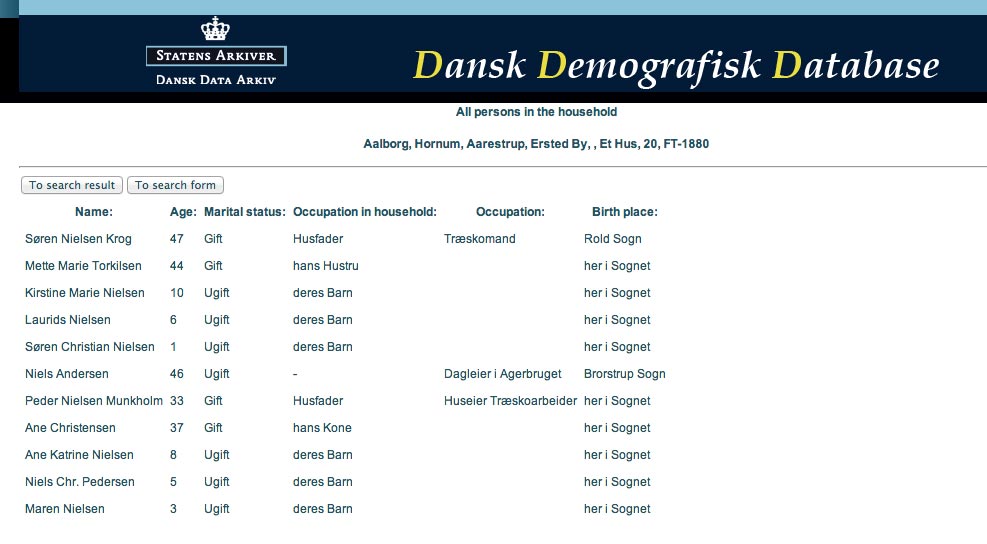 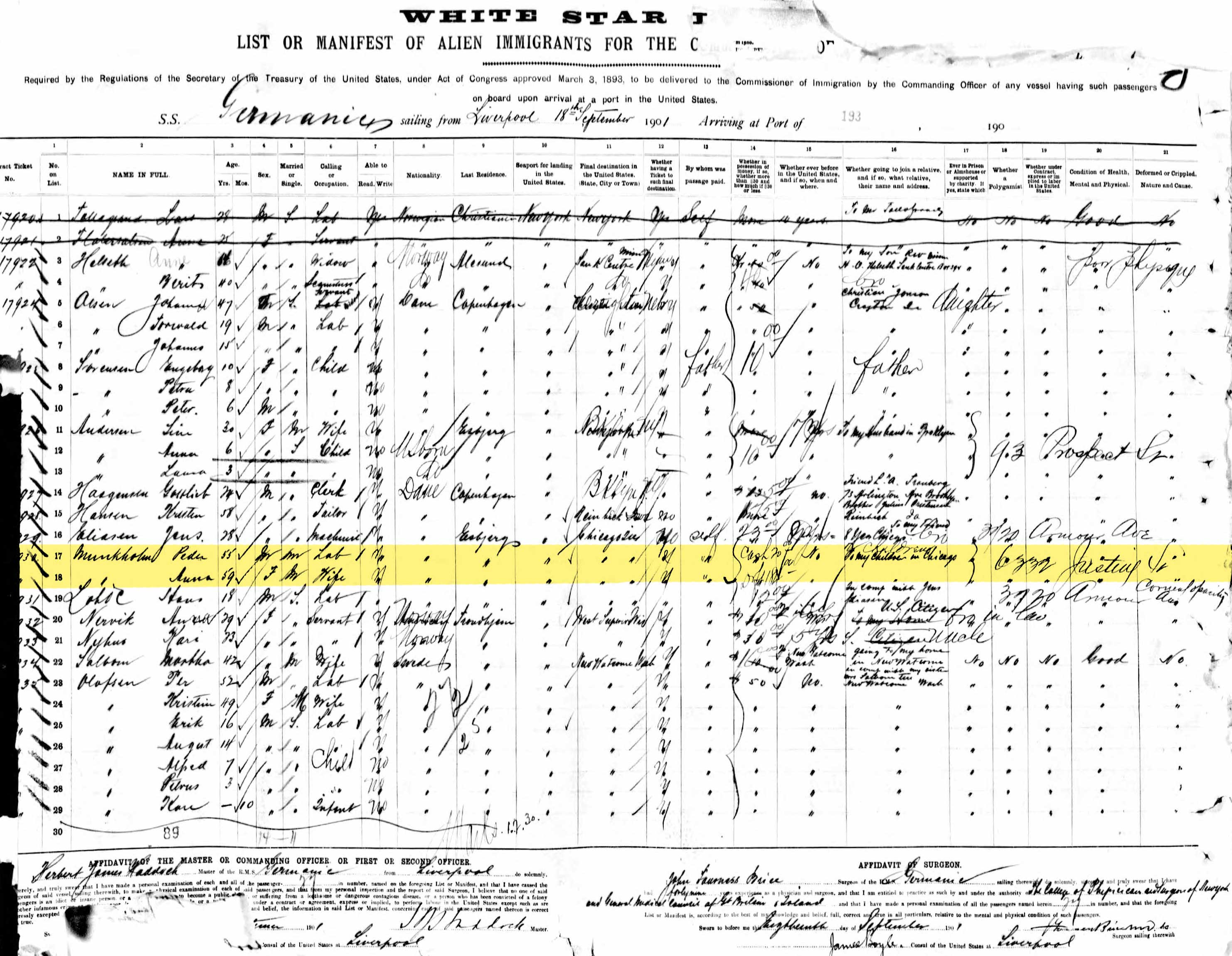 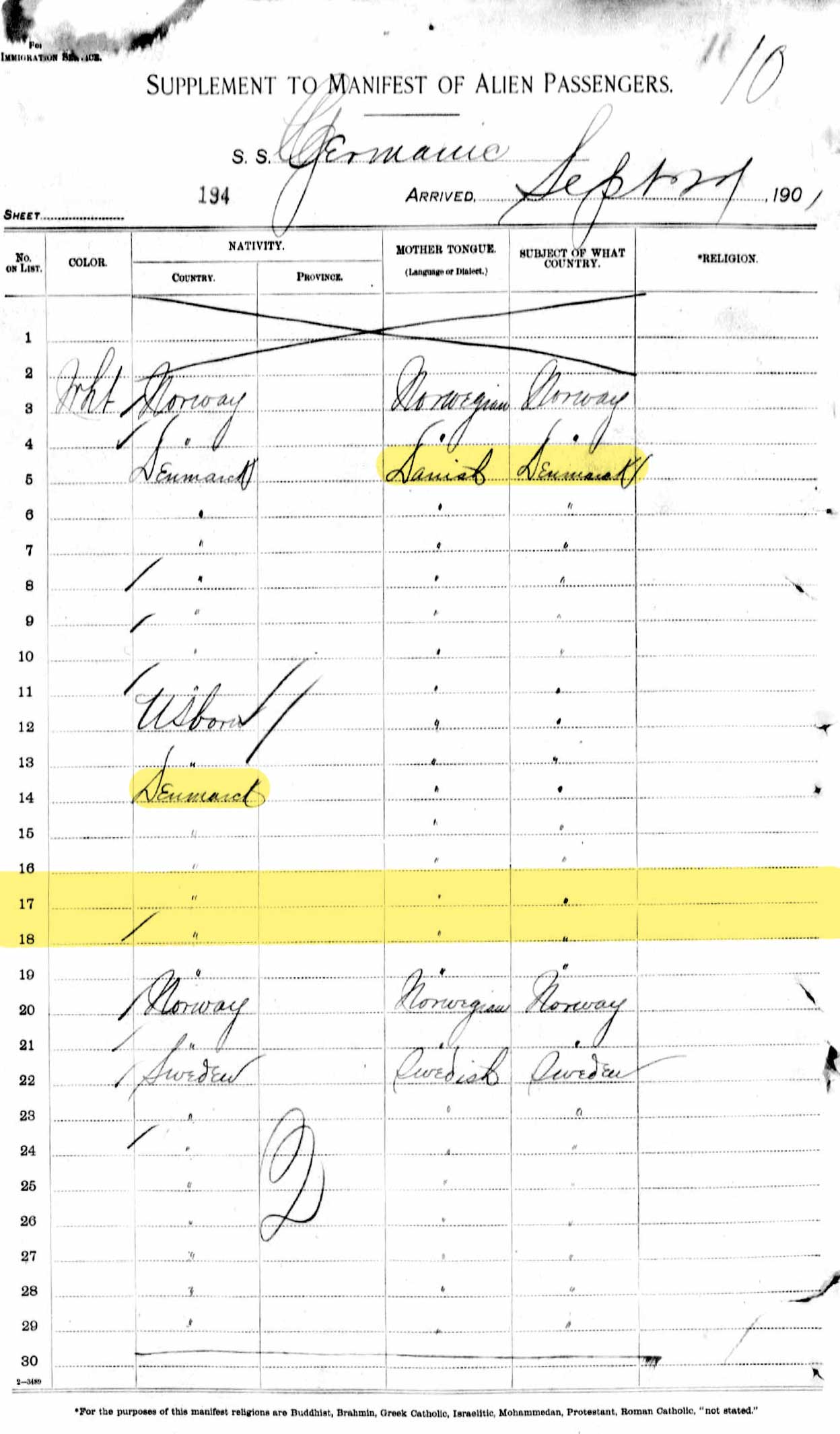 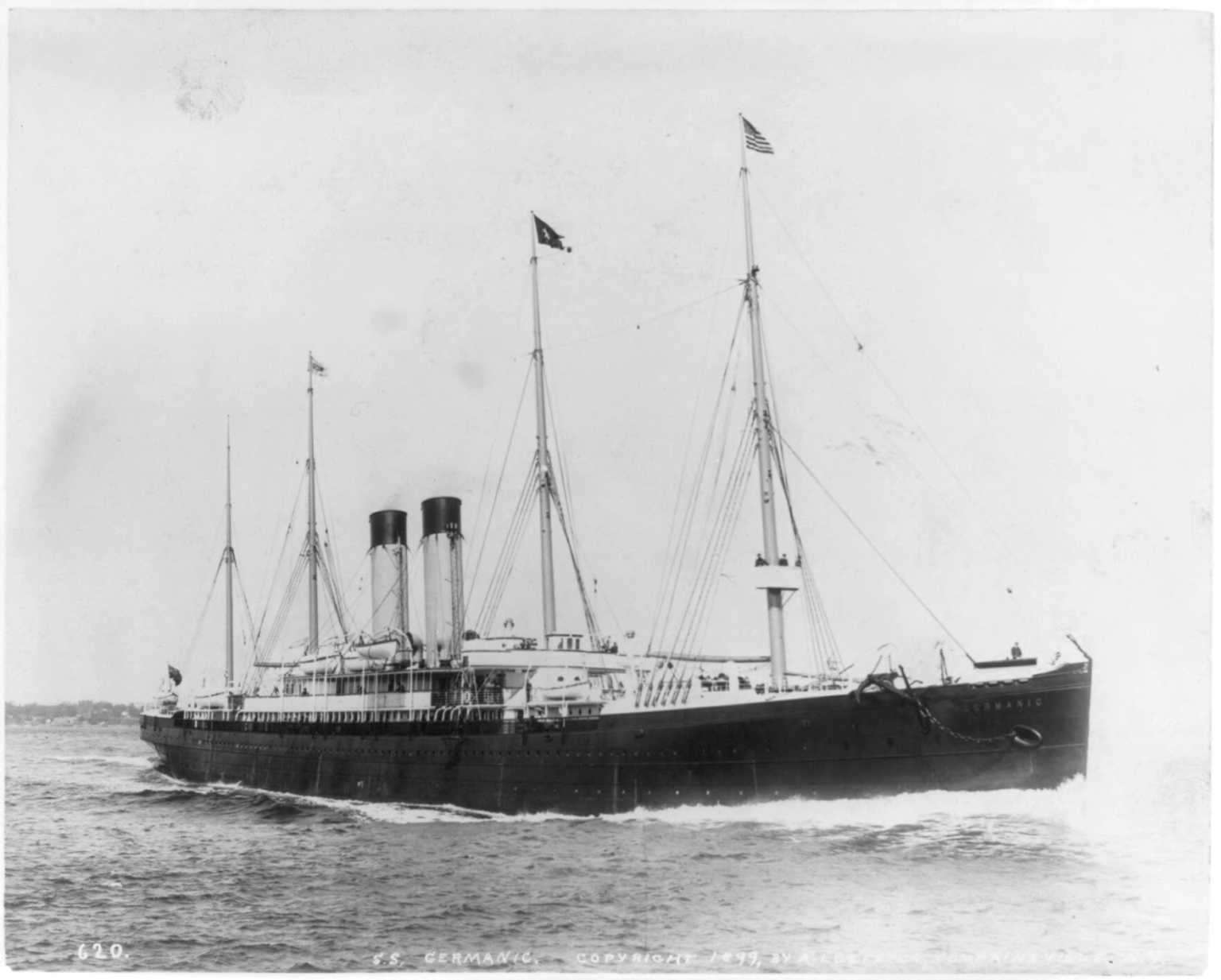 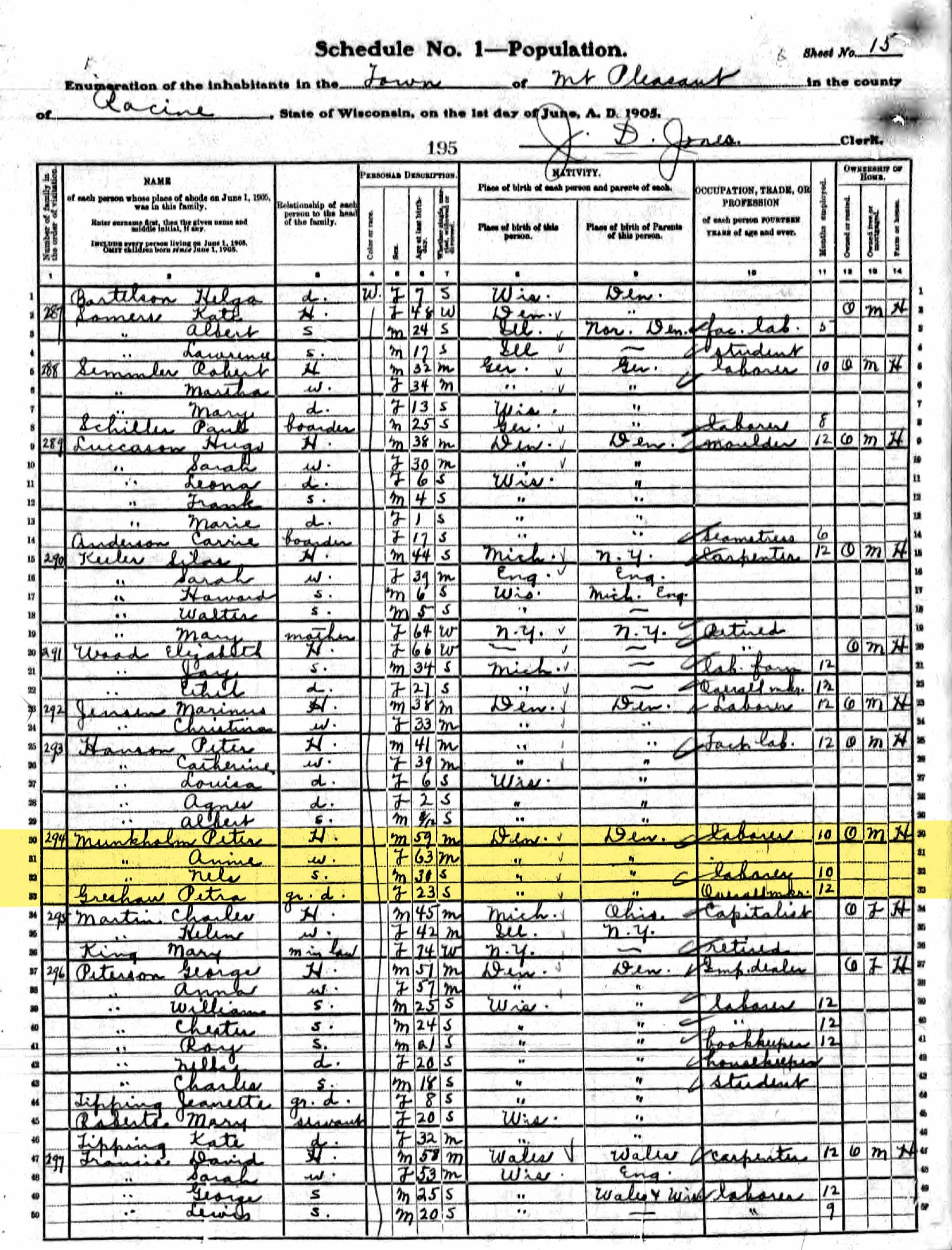 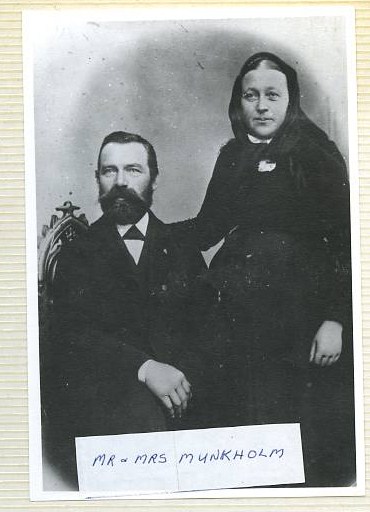 A Husband Peder Nielsen Munkholm was a wooden shoemaker (clogs).

B Peder Munkholm's Will mentions Ane by the name of Ane F. Christensen and states she died 20 Jun 1909 in Milo, Alberta, Canada. Peder's land patent application states they were of Queenstown, but also states he has been living on his son-in-law John Glambeck's farm, which neighbor's his new property near Milo. He had started clearing the land in April and finally built a house in July, but Ane died during this process, making the likelihood that she died on John's farm basically confirmed.

C Traditionally the Danish Lutheran church published banns announcing the impending marriage of a couple. At that point it was socially acceptable to live together, no need to wait for the marriage. It was not uncommon for a child to be born and the parents to marry after.

D The church (parish) took financial responsibility for illegitimate children. This was law. The parish where the mother lived ten months prior to the child's birth was the financially responsible parish. Since the vast majority of Danes belonged to the Lutheran church, this practice was akin to modern practices in which the community as a whole assumes financial responsibility for vulnerable or needy persons.

E There was a penalty not to name the father for the girl, because there was a duty of paying for the child if the father did not marry the mother - that is why it mostly is noted in the parish register. If it was not registered the parish might have to pay! 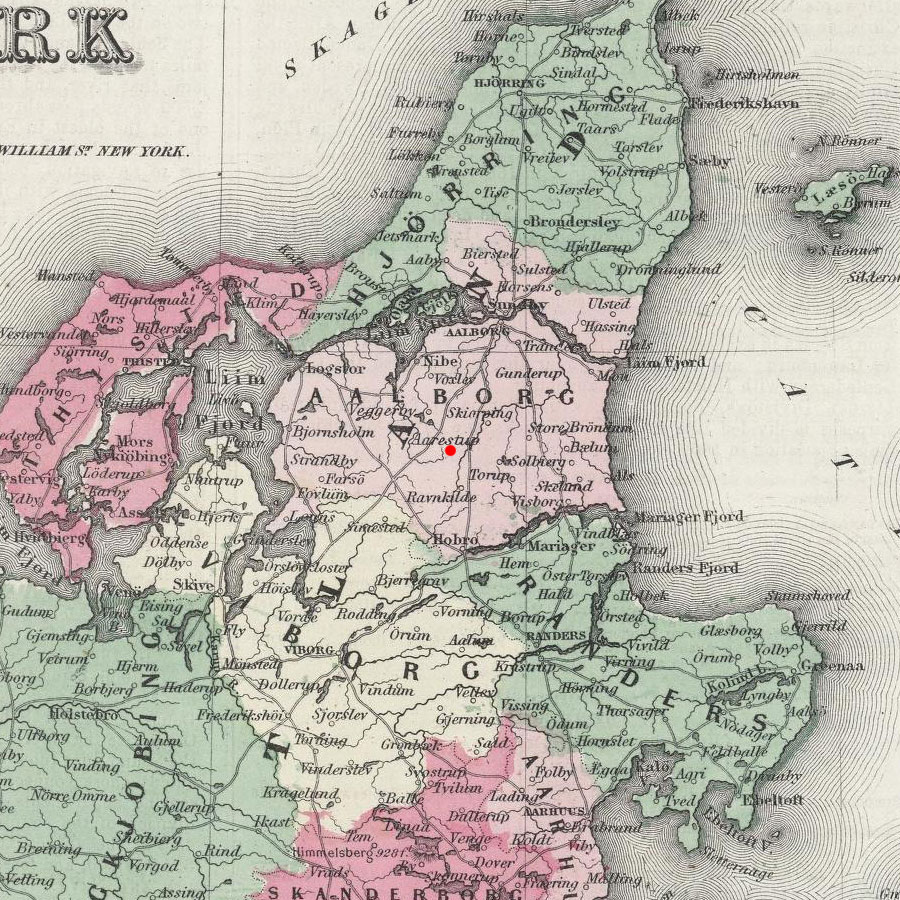